In the last post, you may have read about the costliest bike ever sold in U.K and of course it was no surprise that it was either going to a Vincent or a Borough Superior. Now what bike would come to your mind if I tell you in the U.S, there is also a legendary 70 years old bike which sold at a stunning price of $300,000? Okay, it was not so close to the Vincent price of $350,000, but take a guess what bike that may be? No, it aint a HD, neither an Indian nor an American Ironhorse! Umm... you really cant recall any other American company that old, right? Now what if I were to tell you that a HD or an Indian could never ever match the performance of this stunner! More confusion... well, the brand of the bike is CROCKER. 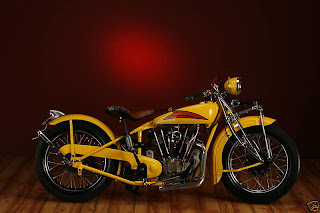 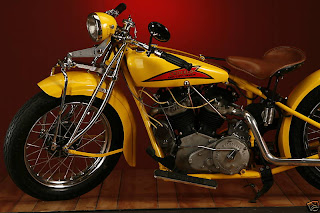 The Crocker is dead, Long Live the Crocker... because the Crocker V-Twin is coming back... at an unaffordable price of $65,000 per bike and only 100 are to be built. Thats quite a number since only 61 Crocker V-Twins were ever built! (or probably 68 according to some reports)
Now what is the CROCKER? Crocker motorcycles came into existence in 1932, which were single cylinder speedways, but these were custom built. In 1936, the first production Crockers were built, which were V-Twins. The factory was in Los Angeles and it was there only for a mere 10 years, that is by 1942, production stopped when the 61st (or 68th) Crocker roll out of the factory. The man in charge, Mr. Albert Crocker started with only special orders with customized capacity as well with some engines going up to 100 cubic inches. The production Crockers although had overhead valves with a particluar thing about the engine. 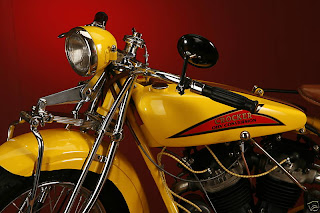 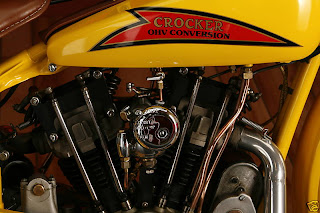 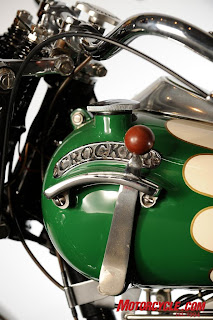 They had hemisperical heads with exposed valve springs, while later models had a flat, squish-type combustion chamber with enclosed valve springs. All came with a three- gear and were magneto-fired. There were two different V-twins models as per the machine is concerned, a 'Big Tank' model and a 'Small Tank' model. The small tank model was supposed to be very sporty as it had a upright fork angle that shortened the wheelbase and quickened the steering. No HD or Indian during those days could match a Crocker. But now, it is back. In 1999 a new corporation was formed to manufacture replica parts and now the company has started taking orders to produce complete Crockers in kit form, following the original specifications, but of course with engine modifications to current standards. Back to history, ALbert Crocker made 30 odd 'custom' speedway motorcycles. When he started 'production' of the V-Twins, the first V-had a 61 cubic inches (1,000 cc) hemisperical head producing 55-60hp in 1930s where as at the same time the Indian and HD were in the 38-40 bhprange. Such was its power. The largest production motorcycle title was held by a Crocker displacing more than 1500cc for over 50 years till 1998 when Yamaha launched the 1600cc XV1600A, a.k.a the Yamaha Roadster. 30 odd single cylinders and 6o odd V-Twins, thats just 100 were ever produced. But just for the record, some say theres hould be around 200 of total Crockers produced - about 40-50 speedway, 100+ V-Twins and 40-50 "Scootabout". Scootabout were the world's first Motor-Scooters. But what the heck, why go into figures?
So what bought the downfall if they were so powerful way back then? The same old World War II, what else? With WWII on, Indian and Harley got government contracts to produce motorcycles, while Mr. Crocker got the more lucrative contract of making aircraft parts and that was it. Being a businessman first, in 1942 Crocker Motorcycle became Crocker Manufacturing. If you look at the pictures, you can also see the quality of work done on these beauties. And it is because that these Crockers are so rare, they command a very hefty price at auctions if they do auction it at the first place. They sell for anything above $200,000 and the highest known auction of a Crocker is a Jack Lilly Crocker bought at $300,500. Now whats a Jack Lilly Crocker? More on that later. 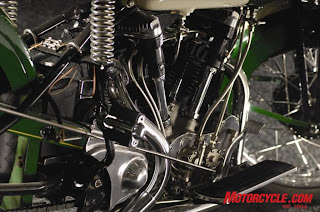 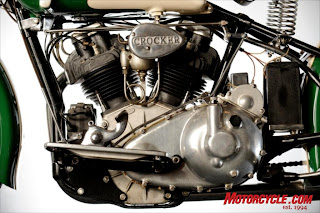 Now coming back to the present, the company I mentioned who took up manufacturing spares were actually formed by a group of Crocker enthusiasts who have tried to keep this U.S first Superbike in modern limelight. Established in 1997 by Crocker enthusiasts Markus Karalash and Michael Schacht, the new Crocker Motorcycle Company is located in Toronto, Ontario Canada (thats what I read somewhere, but the official website still list it as Los Angeles) they formed the "Crocker Motorcycle Company". Now there were not many Crockers alive, so who would really buy the spares except for the few collectors? So in 1999, it was officially decided to incorporate Crocker Motorcycle Company and start manufacturing the complete motorcycle. By 2002, trademarks were registered world wide and plans have been made to produce both small and big tank models. But the peculiar thing is that the parts made are of the exact same pattern and mould that Albert Crocker made 70 years ago. All they do is use ultra modern machines and technologies. 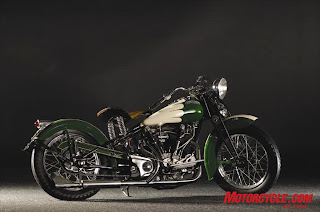 Crocker's casting patterns are made by old world craftsmenship which means it would take quite a time to make them. But that means it would be the exact replicas of the originals. And in all these, the company has constantly sought help from restorers and owners who were there when Crocker motorcyles were being produced. The New Crocker Motorcycle Company has officially mentioned that it is not only the V-Twins that they are going to make, but also the Speedways and Scootabouts. The first models should roll out by December this year and as such they are taking orders from customers. 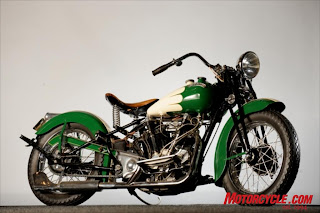 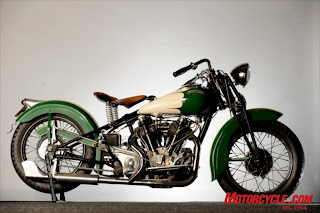 There are so many interesting stories about the Crocker. One story is that Al Crocker declared that if any HD can beat his made Crockers, he would refund all the money. Another story goes that HD was so embrassed with losing over and over, that they had planned mass protest against Crocker. All these stories just cant be put on a simple blog like this. Read this link which I am sure you will rally enjoy, The Legend That Could Have Been at Star Riders. Do you remember that I wrote about a particular gentleman, Jack Rilley Well it was this man's Crocker which was auctioned for $300,000. Why? Jack Rilley has a lot of interesting history more so when you know that he was one guy who had got his V-Twin directly from Al Crocker's factory in 1939. Click on the links to read the interesting story of Jack Lilly and what is the Boozefighter Motorcycle Club? 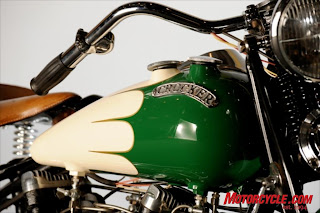 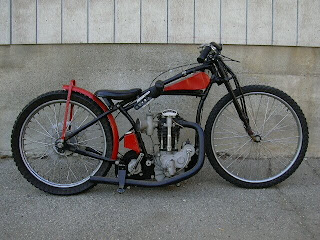 Now if you are thinking was it even actually faster than a Superior SS100 or a Vincent Series A. Well, the answer is 'Yes' at least during its period of 1932 to 1942 because it could touch a peak of 185 kmph!Now again back to the future, what you see below is the C4 Crocker made by the New Crocker Motorcycle Company. Dont believe me, click on the link and it will take you to the official picture link.