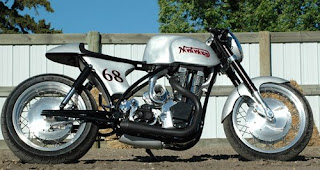 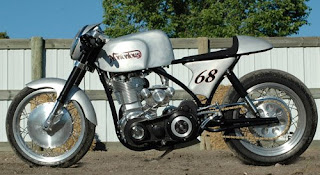 I am sure you have seen this bike in countless websites, forums and blogs and after a minute of 'nice!' you go ahead. Then you read it somewhere that it is a Roger Goldammer creation and you are like 'Ok...' but but Goldammer makes those awesome stunning designs which always gets the top spot on custom design contests and this is rather plain, isn't it? Then you read it somewhere that this particular model made it to the 9th place in the World Championships. Okay, now you take a second look. That is exactly what I have done. Then when I saw the engine with a detailed eye, My-O-My! That looks like a Manx!!! 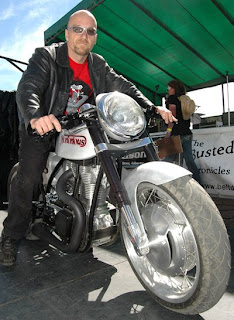 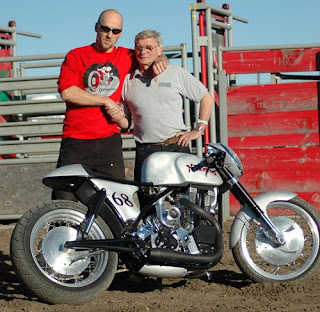 A little bit of googling told me that this model is named 'NORTORIOUS' and is based on a featherbed style frame (not a featherbed, but styled like it) with a single engine displaying 965cc. Although the Nortorious looks simple and plain, the Goldammer stamp is very visual. For instance, you dont see any wiring and hydraulic lines as they run inside the frame with nothing visible anywhere. Again, look at the wheels. Its drum brakes. No! It has hidden disc brakes, but it wouldn't have gone with the retro looks, so there...
When you think Custom, the first thing that comes into mind is Choppers, right! This is where Roger is different and thats why he is truly the master of custom bike championships. For instance, take a look at another of his products, the TROUBLE. The fisrt glance wont give away what the bike actually holds. Well, lets not divert here from the Nortorious here. We all know this man and here are a list of achievements if you really want the details. 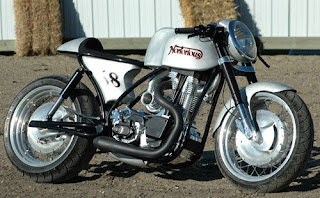 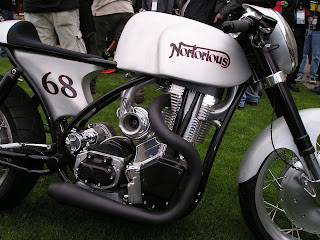 Now, getting back to the bike, this British Columbia Canadian native is a different breed. His 'custom' Nortorious is neither a chopper nor an 'old school' product. Can you really bracket it?
Friend, mentor and master machinist Bert Kuckelkorn and Roger makes bikes that are truly innovative in styling and mechanics or you can say 'on the cutting edge of technology'. the Nortorious is a step higher in the rouble direction, which was also a single cylinder masterpiece. 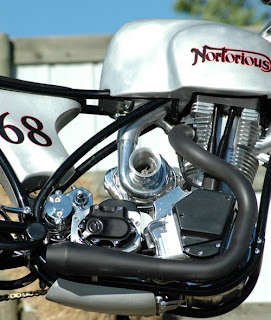 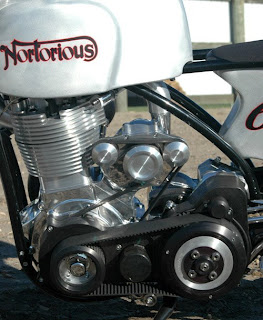 For the record, TROUBLE won him the top World Championship honors. The Nortorious is a tribute to the Manx and there is ofcourse a visual similarity although its hard to pinpoint exactly what. The engine is a 2006 Harley hybrid single cylinder Roger built from the ground up. The 965CC engine features a lower end consisting of Merch cases with the heads customized from Engenuity and the pistons from Ross and Jims. The cam is custom designed and manufactured by Roger inhouse. The rear head is used on the front cylinder, allowing the induction system to be positioned above the head and cylinder with the angle cut back 15-degrees. 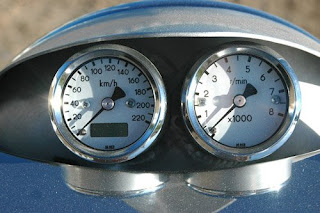 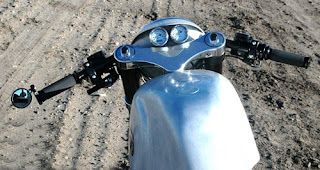 Of course you know its a pushrod engine, which are angled to accommodate this change. And here is the mantra! In place of the rear cylinder he uses a Rotrex Supercharger that spins at 120,000 RPM . This produces 83 rear wheel horse power at 6400 rpm. The bike is completely measurable in current mechanics standard with a fuel injection which uses a 54mm Zippers utilized throttle body and a special Thunder Heart ECM and an extreamly high volume single injector. Roger has also developed a fuel pump mapping program to provide correct air / fuel ratios. The gear is a 6-speed. 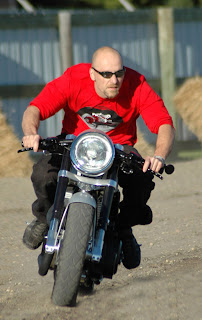 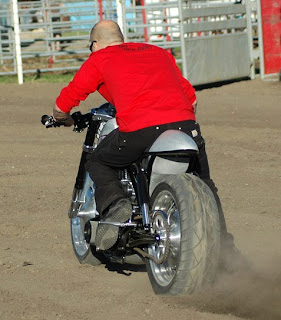 The oil system features a modified S&S oil pump and two distinct oil tanks, both cleverly hidden from view, one for engine and the other for supercharger oil. See, thats Roger, he doesn't just do a chasis and framework custom with a readymade engine, he works on the engine like a pro, on the electricals like a pro, its just like a complete new bike with a complete new engine and all. He works on the transmission meaning on the drive, sprocket, everything.
The frame is also made inhouse. The 29.5 degrees rake and 3 inches de-streched gives it the featherbed style. The concealed disc brakes are an ingenious 4-piston disc set up both front and rear. The rear rim is put together by fabricating from two different Kosman rims for the 18-inch x 6-inch tire. The front is a 18-inch x 3.5 inch. 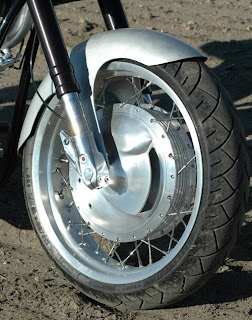 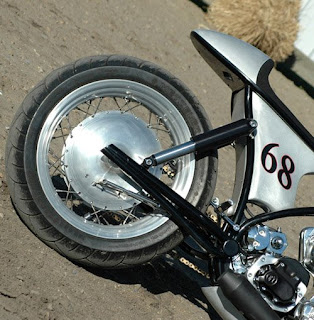 Imagine the ammount of mind numbling he has gone through. Just reading it makes me dizzy and to think about how he actually designed everything... Wow! If you think thats all, wait...
Look at the body and the fenders. There is no welding involved! Really! Roger had hand hammered the aluminum skins! With such precision, he can create probably a Rolex with his hands and available tools. There is only a clear coat over the raw material and the paint used.. is only for lettering. Now, what do you say? 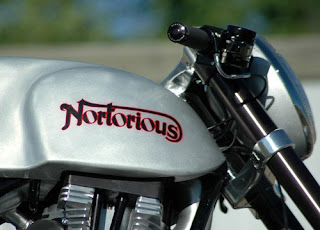 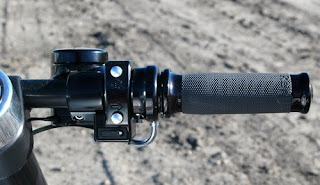 Like a true Cafe Racer, the handlebars are clip-ons with a single rear view mirror on the left bar weight. There are those two beautiful pods housing the Speedometer and gauges and the traditional single round headlamp. Interestingly, Roger used the lens and bezel from a vintage Volkswagen Beetle. Yes, there are tail lights. They are incorporated in the rear of the bikes frame and utilize LED lights. The brake light is also an LED set up hidden in the rear of the seat rail. Look athe photo below closely. There is not one visible wire on the bike except the front disc brake. 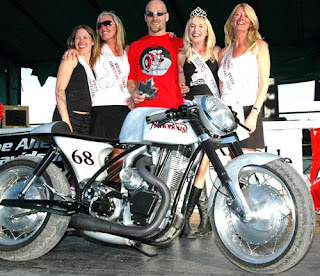 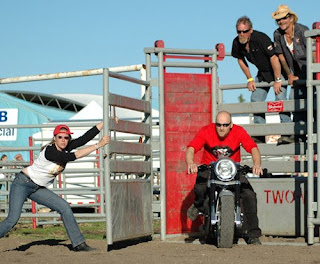 Its hard to say why the judges didn't find it as an outright winner in the world championships, but ask any biker, he or she will definitely sing the Duran Duran hit... 'Lay your seedy judgements. Who says they're part of our lives? You pay the prophets to justify your reasons. I heard your promise, but I don't believe it. That's why I've done it again. No-no-Notorious'. Make that NoRtorious!!!
All information and photos are sourced from Bikernet, except the first photo which is a 1600 x 1200.