'Legend of the Motorcycle' 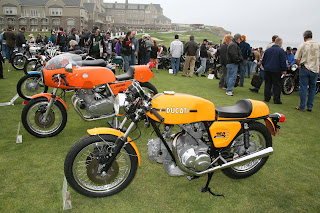 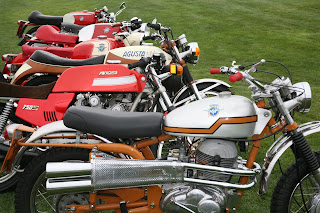 The beathtaking venue and the exotics. The MV Augusta Marque
'Legend of the Motorcycle' is an annual meet which started in 2006 which covers motorcycles from pre 1978 tier. Showcasing approximately 150 to 200 of the finest motorcycles over a century from around the world, it hosts special displays of contemporary custom, racing and concept bikes. 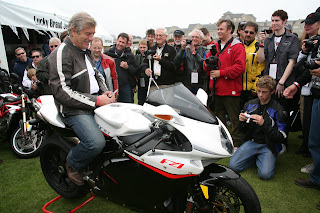 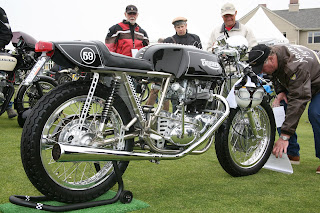 Giacomo Agostini, who is also a judge, aboard the MV Agusta F4 RR 312 1078. 1972 Triumph Rickman Café Racer
The 4th edition is scheduled for Saturday, 2nd May 2009 while the venue has not yet been fixed. There are a host of categories that you can participate and expect to win. There are 'Special Category Awards' like 'Best of Show', 'Lifetime Achievement Award', 'Elvis Presley Award', 'Steve McQueen Award' etc and in the 'Standard Classes' you can participate in the American Production awards, Class Year like 1901-1929 or 1950-1977, European Production, Japanese production, Modified/ Custom and a whole lot of other categories including Off Road from 1956-1969 and another from 1970-1977. 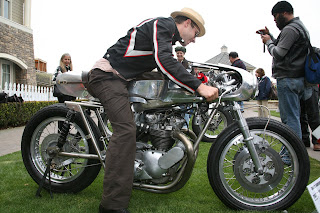 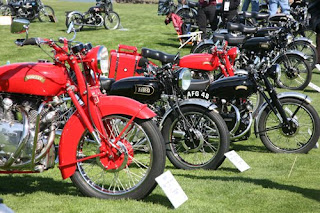 Actor Giovanni Ribisi on a 2007 Silver Wasp. Rarely will you see so many Vincents at one place
In 2008, a 1908 Indian Torpedo Tank Racer belonging to VinceMartinica of California won the 'Best of Show' award. The trophy awarded to all winners is a bronze statue of the 'God of Speed' figure. The 2008 event was organized in Half Moon Bay, California and the event featured exotic bikes from around the world on the lawn of the Ritz-Carlton hotel. 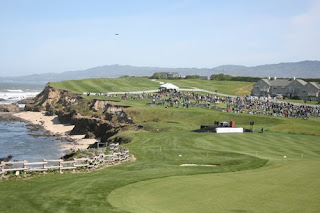 Another picture of the venue. The 1908 Indian Torpedo tank Raver with the 'Best of Show' award
This year's event featured MV Agusta and Norton as the featured marques. There is also a dedicated website for the event. Go to Legend of the Motorcycle for all the information you want. You wont get too many pictures on the website of the legends, so if you are looking for pictures, there are several links on the net, an article with a few photos in Cycle World, and another with all the awards. No photos, but a good article in Web Bike World. And a dedicated group with loads and loads of photos in Flickr. 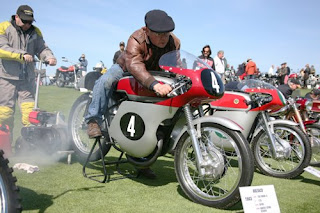 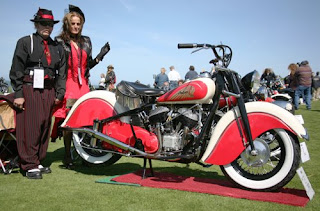 A Bultaco and an Indian with the owners dressed for the occasion.

The God of Speed bronze sculpture.