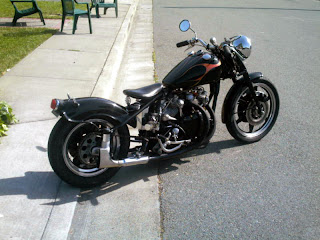 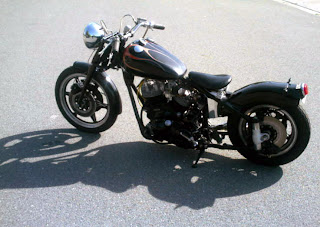 There can be two reactions by looking, no... no... by KNOWING the bike. To start off, its a VINDIAN, a crossover between VINCENT and INDIAN. Sacrilege!!! How can someone rip a legend like Vincent and fot it to another legend like Indian when both could have been masterpieces? The second reaction could be Wow!!! Great idea, the Vincent engine in a Indian Cruiser classic! If it is the former reaction, well why not a VINDIAN when we can have TRITON, NORVIN, etc? Whatever your reaction is, if you are just looking at it, time to stop salivating. Why? because its already SOLD! at ebay on 21st October 2008. 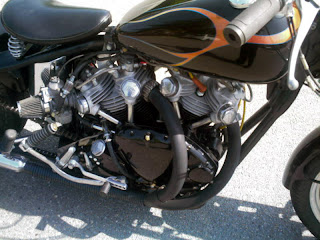 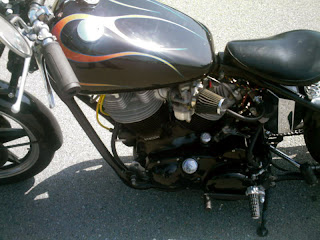 Who so ever came up with the idea has to be applauded, I mean who would have thought the legendary unbreakable Vincent engine in a legendary Cruiser styling? And the overall product... Smashing, isn't it! It has the typical Chopper good looks. And what awesome good looks! I am not saying that the paint quality and all are top notch, but the matching of the engine with the chassis is so perfect that... well, words fail me. 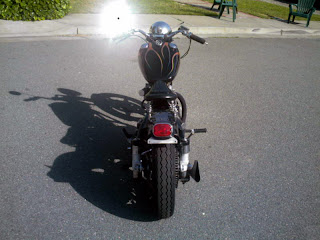 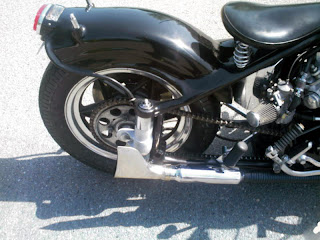 The orinal donors are a Vincent HRD Black Shadow for the engine and an Indian Chief for the chassis. According to the information given in the website (link below), this motorcycle was built in the San Francisco Bay Area in the late '70s. The engine is an original Vincent Black Shadow powerplant, F10/AB/1B/4121, with matching case numbers and verified by the Vincent Owner Club of England. The frame and forks are Indian Chief. Well, to equip it with further modern technologies, the original wheels have been replaced by Carrol Shelby mags and a Honda disc brakes. The website says that there is a small dent in the gast tank left side, but would you really care? The engine has been completey rebuilt from the crankshaft out. From the looks, the rear mudguard is definitely Indian, the front seems to be styled on a Vincent. The handle bars and head lamp seems to be from a everyday bike. 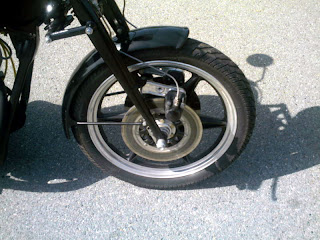 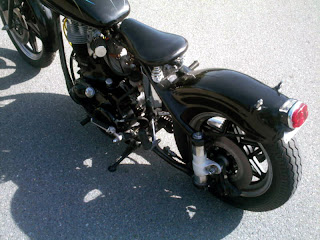 The tank definitely looks like an Indian. The last owner says "it draws a crowd wherever it goes". Buddy! that would be an understatement. Among other details, the engine has Lightning cams, Dellorto 32mm pumper carbs. The engine though is untouched which means you (okay, the new owner) will get the legendary howl from those exhausts. The frame has been modified to fit the engine. While that may be of concern about the handling, but of the two choices, this was the obvious better option. Just for the record, bidding started at $12,500 and finally ended at $21,360. Man, that was cheap, think about it, just the Vincent engine starts bidding from $20,000 and here you are getting a whole customized bike for that money. Probably the chassis being modified has kept away a few people. Whatever it is, the new owner will be very very envied upon.
Original Source of photos and information - EBAY