What could have been... Way Back When... 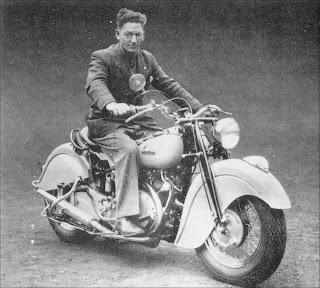 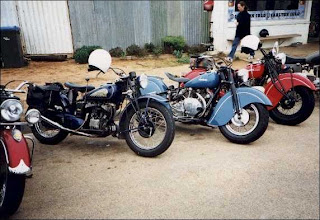 After the last post I made on a VINDIAN, I got a couple of emails out of which one mail from Mr. Larry Kahn directed me to visit a website where I could find lots of information on previous VINDIANS. All the text below are from the links provided by Mr. Larry. THANK YOU Mr. Larry! for opening another world of totally beautiful bike craftmanship. He simply wrote WAY BACK WHEN....
Source - Indian Motorbikes
I have edited the text to give you an overall insight. Please refer to the links below for the full text.
RICH MIXTURE – Some Historic Indians…
Not many bikers know about a specific 250cc V-Twin fron INDIAN. We all asociate the INDIAN Motorcycles with big V-Twin machines. In 1917, Indian motorcycles had a 250cc side-valve flat-twin engine with the cylinders lying for-and aft, magneto ignition and an outside flywheel. Another 350cc single-cylinder Indian Prince was brought out in 1925 as a counter blast to the small English machines, which were beginning to gain a foothold in the American market. It was a more successful model than the Light Twin and was evidently the outcome of a close study of several imported machines. The engine had a detachable cylinder head. The Prince was not very fast, but it was reliable and the Australian rider Vic Barclay broke a couple of intercapital records on one. Then came the 216cc single and 433 parallel twin which were introduced designed for the Indian factory by two Dutchmen named Stockvis. Later on the Stockvis brothers went to the States and became involved in the new Indians which were a costly failure partly because of their low performance and the fact that they were too highly built to be reliable. And also partly because to buyers loyal to the brand, these bikes didn't LOOK like Indians. At the same time, the Vincent was also beginning to penetrate the U.S market following its capture of the American speed record. In 1948 when P.C. Vincent was conducting a sales campaign in North America, he met a very suave gentleman who happened to be the head man in the Indian Company which was by then in very low water. An English businessman named Brockhouse, who owned a number of engineering companies, was anxious to obtain a controlling interest in Indian, and the upshot of discussions by the three was that if the Vincent unit could be fitted in the Chief frame without much alteration, the result would be a very saleable machine with financial benefit to all concerned..
After the legal issues were sorted out, a Chief was shot over to Stevenage and as a preliminary it was road tested. Its 580 pound weight seemed enormous compared to the 450 pound Rapide and while it could attain 88 mph for a short distance, the sustained maximum was only about 80mph. After removing the engine and sawing off some unwanted frame parts, the Vincent unit fitted in like a kernel in a nut. Engine plates were used instead of the standard cylinder head brackets and the existing foot boards and break pedal were retained but some cross-over linkage had to be devised in order to use the near side heel-and-toe clutch pedal as a gear change pedal. The dynamo remained in the original position under the saddle and was belt-driven from a short shaft and pulley.
The conversion job took only a couple of weeks and although the finished article was not much lighter than the original, the performance was vastly improved. Top speed went to 104 mph and it was as fast as it used to be in top. Changing gear by foot instead of by hand improved acceleration. Everything was in sync and to cope with the increased output, orders had been doubled and material was beginning to come in. But the money promised, failed to materialize on the grounds that the plant and stock did not provide sufficient asset backing. Vincent had thus been wangled into an intolerable position with the possibility of an enforced liquidation and sale of the factory to the highest bidder. As it was, the Indian Co. was forced to sell an insignificant 250cc model to keep going at all finally the company was acquired by Associated Motor Cycles in 1953 and the history of the famous company founded by George Hendee, came to an end.
Source - Indian Motorcycles - VINDIAN

Vindian – The Bike They Should Have Built…from Heavy Duty magazine
In the 1940s, the INDIAN brand was not going too well and the then President of the company, Mr Rogers was convinced that the old style of American motor-cycle with big V-twin engines and heavy weight was doomed to play an ever decreasing role in the American motorcycle scene. So he expressed an interest in the possibility of fitting the highly acclaimed, 61 cubic inch Vincent Rapide engine in the existing frame. This would give him a competitor for the more advance Harley-Davidsons and allow the Chief to continue as the status leader of the company's model line-up. It would also cost a fraction of the price of developing a new engine from scratch. Rogers shipped a 1948 Chief (without engine) to the Vincent works in Stevenage (UK) and the legendary Phil Irving was put on the case. It was Phil Vincent's view that by lowering the standard Rapide top gear below its existing 3.5:1 and increasing the compression ratio to around 8:1, the Rapide engine would be able to shift the enormous weight of the standard Chief with considerably more speed than it was accustomed to. The stock Indian V-Twin was good for around 85 mph (a speed which decreased as the engine heated up) and weighed around 580lbs. Vincent predicted a weight for the "Vindian" of around 500lbs and a top speed of around 110 mph. Phil Irving didn't share Phil Vincent's optimism. Concerns about plonking a performance engine in the stock frame would have included misgivings about aerodynamics, too. The fender valences on the standard bike caught wind and created stability problems at low speeds. The Irving-built Vindian, complete with giant tyres and mudguards, was tested successfully at over 100 mph before it was sent to Indian's Springfield plant in the US. According to Phil Vincent, by using "great care", the Rapide engine could be slipped into the Chief frame without fouling either frame or tank. Having actually tried to do it, Phil Irving must have known this wasn't correct. How this came to being the truth was because 40 years later, an Australian gentleman, Mr. Peter Arundel attempted the same, only to make some interesting discoveries. The engine doesn't fit. The frame bar running beneath the tank had t be raised by four inches, necessitating gusset reinforcing around the steering head area. There was also the need to create an indent in the underside of the petrol tank to accommodate the left-hand carburettor. The tank also had to be modified to allow for the right-hand rocker box. These kinds of modifications would have provided a powerful disincentive to Indian which, at the time, obviously felt its production lines could have been put to better use.
So somewhere in history lies the hidden truth as why the Vindian never took into production existence. As the last post mentioned, that there were some financial issues, but then this post showed that there were also mechanical issues.
Source - Indian Motorbikes (Original Source - Heavy Duty Magazine) 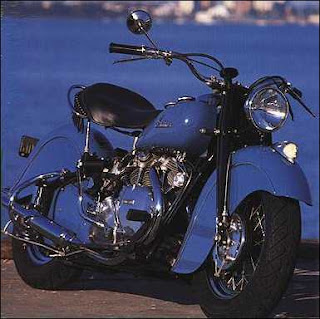 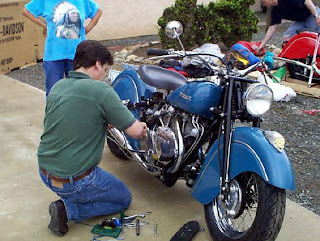 For a more detailed study of the project, there is an article by Mr. Bill Gordon in the world's oldest and biggest VINCENT Club, MY VINCENT which clearly points at the lacunas of the project. Basically it states the same facts as mentioned in the above two articles, but what is noteworthy are these points.
"Their Pound Sterling was reduced in dollar value from $4.05 to $2.80, which created an instant 30% reduction in the American retail price of British motorcycles. This was strike one against the Vindian project. Strike two was the resignation of Mr. Ralph Rogers in 1949 which also saw
huge revenue loss due to production delays in the new Indian models by six months. Strike three came when John Brockhouse acquired Indian, but for just one reason…. he needed a sales outlet that would allow him to sell his British machines in America. As he didn't have much interest in the INDIAN brand, this also bought the end of the Indian Motorcycle Company itself."
Read the full article in the official website of MY VINCENT. The above articles are also available in MY VINCENT. All pictures courtesy - MY VINCENT