The History of MV AGUSTA 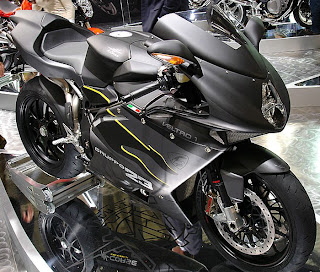 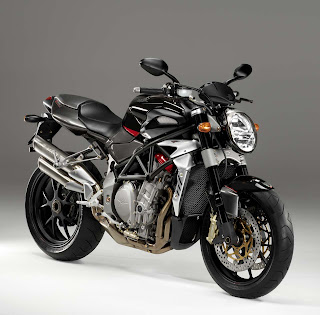 The marquee MV AGUSTA is associated with high end and beautiful motorcycles. Well, for this, this aint no rags to riches story. The Agusta family tycoon was a very well to do business family who started out with Aeroplanes. Giovanni Agusta founded the company in 1907, but after his death in 1927, it was Domenico Agusta who branched out to motorcycles as they were facing crunch time and Italy had started finding its flavour in 2 wheelers.
The Early Years
The first motorcycle project was a 2 stroke 98cc 2 geared bike, but with the Second World War, things had to be scrapped. In 1945, after the war, the project was officially launched for the public and the first MV Agusta was born. It was initially to be called Vespa 98, but it was found that the name had already been registered (Piaggio launched Vespa in 1946), so it was referred to simply by the number “98”. Thus began the journey of what soon became known as 'the Ferrari of the two wheeled world'. 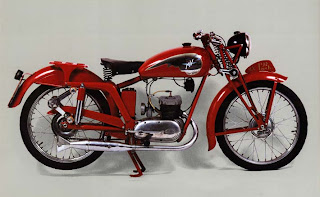 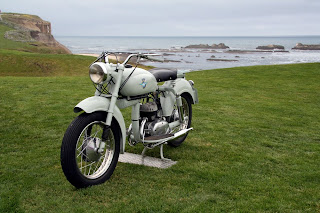 From the early 1950’s to late 1970’s, MV Agusta had enormous success in racing and were ridden by some of the most famous racers winning 75 world championships, 270 Grand Prix wins and 3027 international race wins. (Source-Wiki)
The wins helped MV in their publicity campaign and sales increased which was also because MV responded to customer demands. They also bought many technologies from the racing circuit to the road bikes. By 1953, MV Agusta was producing 20,000 bikes and largely credit could be given to the amazing 125 Pullman. The mid 1950’s saw the introduction of the 175cc class. MV Agusta produced the 175 CSS for street use and also developed a 175cc production racer for racing. Then in 1957 a young Mike Hailwood raced the MV 175cc. 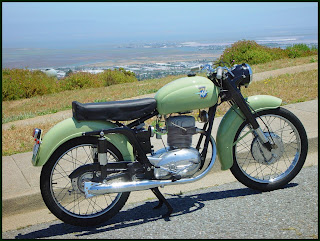 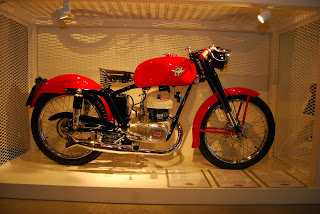 By the 60s, small cc motorcycle were decreasing in demands, so MV started producing bigger bikes starting from 250cc to 350cc as well as a 600 cc four-cylinder later evolved into a 750 cc, the 750 Sport which was capable of speeds of 220 Km/h. Why? Because although the 600 four cylinder was considered the first maxi motorbike and the engine was derived from Mike Hailwood’s 500 GP, Count Agusta made the 600 differently (which was detuned) from what was being raced and fans expected a racing bike. The bike flopped and so in 1970 MV introduced the 750 Sport which was race orientated and thus became an instant success. In 1975, an updated 750 Sport was introduced, the 750S America. 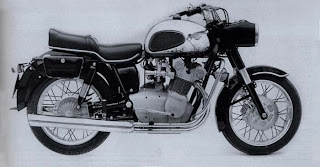 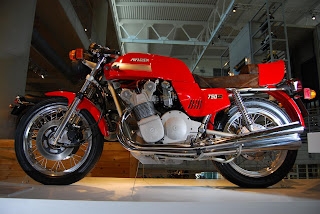 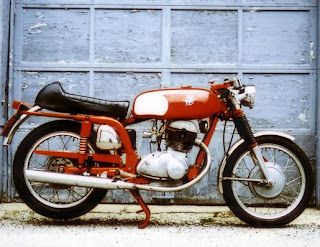 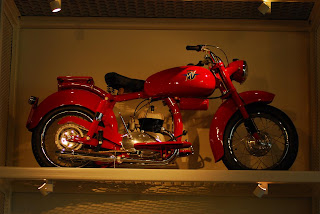 The 60s overall saw the motorcycle market slow down with the evolution of the family car trend and to worsen the situation, the visionary Count Domenico Agusta passed away in 1971. Mr. Agostini stepped in and for a while things looked bright, but MV focussed on only 2 models, the 350cc & the 750cc. But by then, the Japanese invasion which has already shut down many legendary English marques also forced MV Agusta to shut shop and by 1980, MV Agusta closed down. 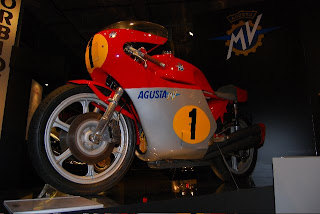 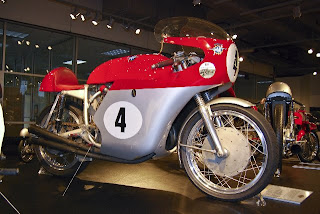 The Resurrection by Cagiva
After a decade of shutting down, CAVIGA purchased the MV Agusta name trademarks in 1991. The Castiglioni family were the owner of the CAGIVA brand and they had demonstrated their managerial skill by creating Cagiva out of the ashes of the glorious Aermacchi AMF. Not only that, they have resurrected Ducati only a few years back.
Cagiva had their worked cut out as MV Agusta, the brand has its own heritage and it has to stick to its roots. At that time the concept of in-line 4 cylinders were quite alien to Europe, so Claudio Castiglioni thought of buying a Japanese engine but finally left that idea and created a totally new one. And in 1997 it introduced the first new MV Agusta motorcycle, the F4 Serie Oro, 750cc and followed it with limited editions such as the SPR (Special Production Racing). 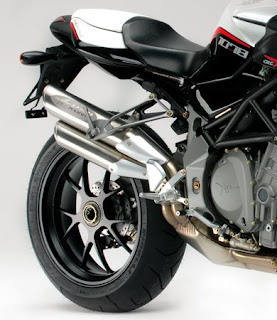 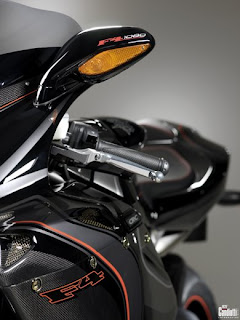 The F4 series was the motorcycle that launched the brand’s resurrection in 1998 and in 2004 they introduced their first 1000 cc F4 bike. The F4 series was created by famous motorcycle designer Massimo Tamburini, no introductions required at CRC (Cagiva Research Center). The built by hand F4 is unique with its four pipe undertail exhaust, single-sided swingarm and traditional MV Agusta red and silver livery. You would be probably surprised to know that during the design process Ferrari engineers assisted in the development of the engine because the basic engine was derived from the 1990-1992 Ferrari Formula One engine referred to as F4, but later deviated from the design keeping one important feature, the radial valves. 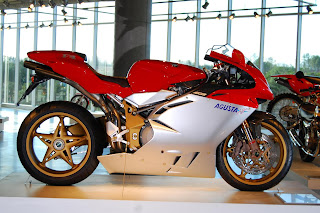 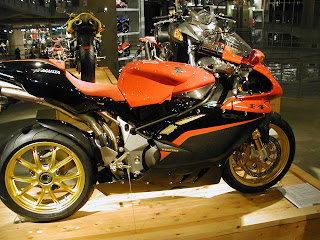 This liquid cooled, inline 4 stroke, four cylinder, DOHC, 16 radial valves, electronic multipoint injection one of the only production superbikes to have a cassette style transmission and radial valved engine.
Tamburini had years of experience working with BIMOTA (Bianchi, Morri and Tamburini). The first prototype was displayed on September 16 1997 on the eve of the 1997 salon in Milan. Critics hailed it instantly as the best sportbike in the world. The MV Agusta F4 is hailed as a benchmark in terms of innovation. From its style, looks, technical gadgets, performance, handling, there is no equal, except maybe the DUCATI series which is also incidentally credited to Mr. Tamburini. I have never ever ridden or even sat on a MV, but renowned critics have hailed the bike as the best handling motorcycles ever created. The bike was impressive for its speed of over 280 km/h and its extraordinary cycling component, universally considered to set the new standard. 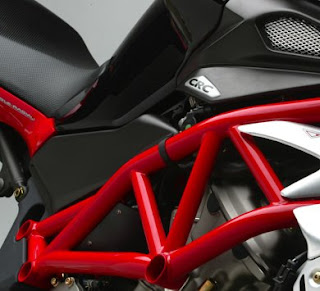 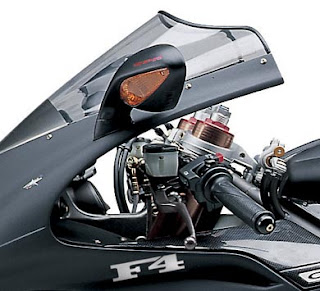 Production of the new MV Agusta required a complete reorganisation of the productive cycle, converting the Schiranna plant for production of engines only, while final assembly was transferred to the new productive plant in Cassinetta di Biandronno. Then came the blisteringly beautiful BRUTALE, which gave a whole new meaning to the term ‘Naked motorcycle’. Standard models include the Brutale 750S, Brutale 910S, Brutale 910R and new for 2008 Brutale 1078RR. In 2005, MV Agusta introduced the Tamburini 1000, which is named after its creator, Massimo Tamburini. You must be well aware of the Ayrton Senna edition which came out in both the F4 750 cc and F4 1000 cc versions. Only 300 models of each were made.
Anyway, back to the history, for market reasons, in 1999 the Cagiva group was restructured and MV Agusta become the main brand comprising Cagiva and Husqvarna. 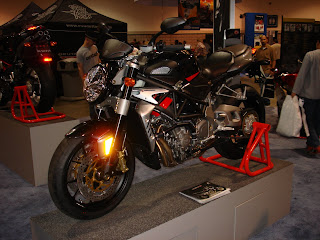 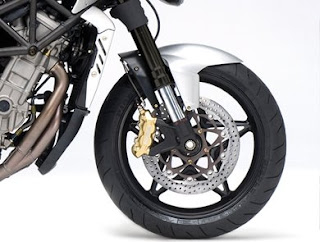 The Coming Future
But making these high end motorcycles again took a toll on MV Agusta and by the end of 2004, the brand was bought by Malaysian carmaker Proton. However after exactly a year, MV Agusta got its roots back to Italy, thanks to GEVI SpA, a Genoa based financing company who bought back MV. To expand MV further and under financial constraint, in mid 2007, MV Agusta Motor S.p.A, sold the Husqvarna brand to BMW. And now as we know last year in July, Harley Davidson had announced that they are purchasing the MV Agusta brand for $109 Million and by August, it happened.
As relates to MV Agusta joining the SBK World Championship, well in May 2007, the company confirmed its return to racing in the 2008edition, but Carl Fogarty (who was heading the racing team) opted out due to lack of sponsorship and as such it still is status quo in 2009. No official dates as when they might join the SBK WC. 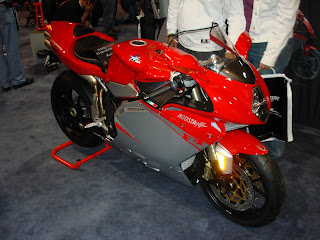 The index page of the official website with greet you with the following lines. "Moulding matter with the force of passion. By means of this philosophy, MV AGUSTA creates its models following a commitment that starts from expert craftsmanship and materializes into the rational language of standardization. For these reasons, the MV AGUSTA F4 and Brutale behold a different and unreachable beauty where the richness of contents reveal both the complexity of a product carefully handmade and the rational execution necessary for mass production. The consequent expressive value that results is close to a work of art that finds its contemporary presence in the technology adopted and in its destination."
There is no doubt the passion that the brand carries and it is very very evident in the products line up. Truly, this is pure art. Motorcyling, technical gizmos and everything else just falls into it.
Visit the official MV AGUSTA website for its stunning display of models and more inormation on the bikes.
Source: MV Agusta & Wiki