The Delectable VTR and Traditional HONDAs 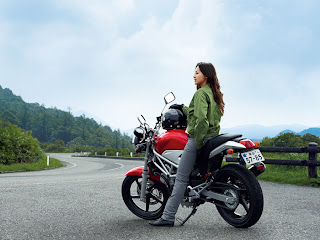 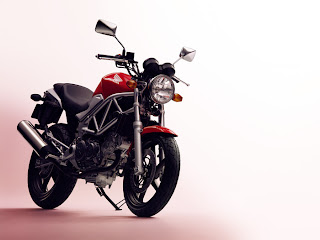 A few days back, I made a post on the treasure that YAMAHA Japan has in the country unknown to the outside world. I thought if Yamaha has so many hidden aces, could HONDA Japan be far behind? And I was right! HONDA Japan too has quite a few models that are not available to the world which also includes (like the Yamaha SR series) the legendary CB750.
Of course, it has the entire range from the DN-01 to the Fireblade to the Hornet to the Shadow and the Offroaders, but you know that. So lets focus on the lesser known bikes. To start off, there is this V-Twin Quarter VTR. Yes, we normally associate VTR with the dreaded 1000 cc engine, but this a cute 250cc V-Twin targetted at the fairer sex. All the details of the bike are given here with various features, engine specs and all. 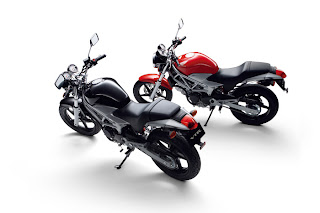 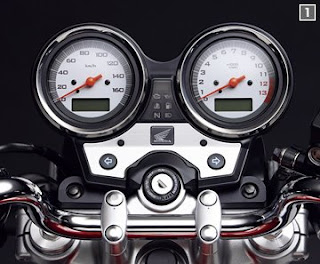 It has a 249cc V-twin, DOHC 4 valve 4-stroke water-cooled engine with inner diameter & stroke of 60.0×44.1 and a compression ratio of 11.0:1. Maximum power output is a very creditable 3ops @10,500 rpm and Maximum torque is also quite satisfying at 22Nm @8,500 rpm. The fuel system has Honda renowned PGM-FI and has the usual features like self start, 5 speed gear transmission, Wet multi-plate coil spring Clutch type, hydraulic disc brake at both sides with telescopic suspension up front with a monoshock at the rear. Tyre sizes are 110/70-17 at the front and 140/70-17 at the rear.
There are 2 styles in the VTR, one with red or black colour with black alloys and the second with white, blue or yellow colour with gold-coloured alloys. The gold-coloured alloys will cost you $100 more than the other one at $5665. There are also 3 videos titled 'Feel The Real Theater', 'Styling & Mechanism' & 'Impression' and I am sure you will like them. For additional images of the VTR 250, view the Photo Gallery. 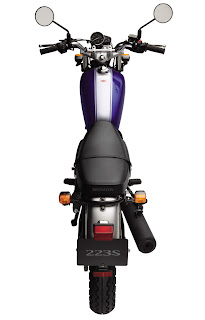 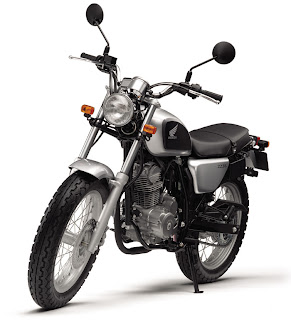 This is the CB223S carrying the legacy of the CB series. Essentially for beginners like the VTR 250, the engine is a single cylinder and this engine does a lot of duty in South American and South East Asian marketsunder various guises. The looks are very eighties and a mixture of street and offroad bikes. Definitely a good looker and should do very well for your younger bro's (or kid's) first 2 wheeler as the engine is very basic. It's a 223cc Air-cooled 4-stroke OHC single cylinder with bore × stroke of 65.5×66.2 mm and a compression ratio of 9.0:1. Maximum power output is a modest 16ps @7,000 rpm with maximum torque of 18Nm @5,500 rpm. No FI, plain VE3DC carburetor but has self start assisted by CDI battery ignition, Wet multi-plate coil spring Clutch type and a 5 gear format. It has a single disc brake at the front wheel and the tyre sizes are 110/90-18 at the front and 130/80-18 at the rear and like the VTR250, telescopic suspension up front with a monoshock at the rear. 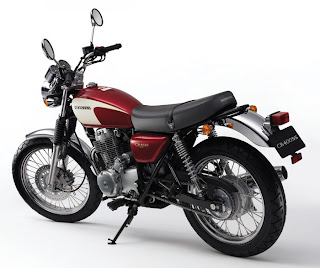 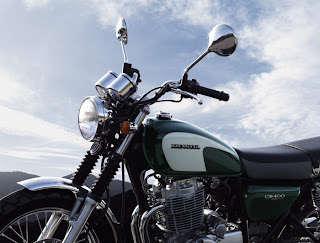 In the same lines with the CB223S, comes a bigger engine, the beautiful CB400SS, a basic bike like the CB series, but you know the way they put it, You always meet the nicest people on a Honda! This bike will just play that part. Simple and elegant with the retro looks of a twin pod and a round lamp, air cooled engine, spoked wheels and all. The bigger brother of the 223 has the same engine bored out to 85.0×70.0 for a total output of 397cc. And yes, thats right, this aint a in-line twin, there are 2 exhausts for better emission controls. This air cooled 397cc single-cylinder four-stroke 4 valve OHC engine also has a built-in balancer to reduce vibration. It has a compression ratio of 8.8:1 with morderate power & torque figures of 29ps @ 7000 rpm & 31Nm @5500 rpm. And like the younger sibling, the other specs are similar like VEBAC carburetor, CDI ignition, self start, Wet multi-plate coil spring Clutch type, 5 speed gear with similar capacity engine of 11 litres. Tyre sizes at front is 100/90-19 and rear is 110/90-18. Braking is similar to the CB223S while in the sspension, there is a swingarm at the rear. 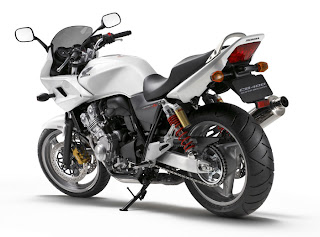 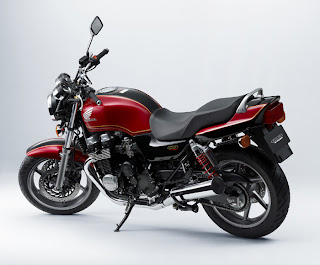 Moving on to more exiting things, we come across the hot CB400 SUPER FOUR / CB400 SUPER BOL D'OR which debuted at the 40th Tokyo Motor Show held at Makuhari Messe in Chiba, Japan from October 27 to November 11, 2007. This is one exiting small engine bike that you would love to get your hands on. It has all the ingredients of a modern bike. The engine is a DOHC 4 valve in-line 4-cylinder water-cooled 4-stroke displacing 399cc with Inner diameter × stroke of 55.0×42.0 mm, compression ratio of 11.3:1. A healthy torque figure of 38Nm @ 9500rpm and maximum power output of 39ps @ 10500rpm which means it's going to be one rev happy engine. To make the throttle even cripsier, it has the PGM-FI for its fuel supply, of course the other formalities like electronic ignition start, etc are present. Like all Hondas, it has Wet multi-plate coil spring Clutch type. Transmission is via a 6-gear ratio. The Bol D'or (which you must have guessed it by the name itself) is the one with the front fairing, just in case you didn't knew. Tyre sizes are 120/60-17 & 160/60-1 at the front and rear respectively. Twin (hydraulic) double disc at front and a single (hydraulic) disc at the rear and has telescopic suspension at the front with swingarm at the rear. 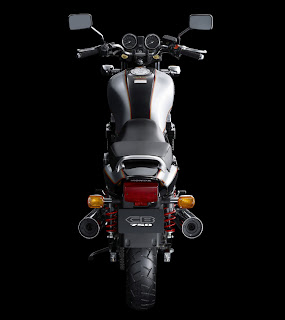 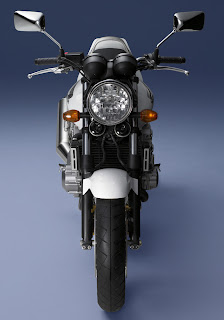 Now moving on... wait, it's actually Back To The Future! The bike that started it all, the Legend 2 wheeler, the British-Bike killer, the First SBK tag holder (I guess that will be enough) (Okay, drums rolling...) the CB750. But lets not waste space talking about the bike, we all know everything about it and some more. The present 2008 bike has the following tech specs. The engine is a DOHC 4 valve 4-cylinder air-cooled 4-stroke of 747 cubic capacity with Inner diameter × stroke (mm) of 67.0×53.0 and a compression ratio of 9.3:1. Maximum output is 55ps @ 8,500rpm and Maximum torque is 64Nm @ 7,500rpm. It still uses a carburetor but has additional systems like TPS (Throttle Position Sensor), of course since its first launch in 1969 it had (and was the world's first) self start full transistor battery ignition. Clutch type is of course Wet multi-plate coil spring and has a 5 gear ratio. Tyes size is 120/70-17 & 150/70-17 at the front and rear respectively. For additional photos, click here. 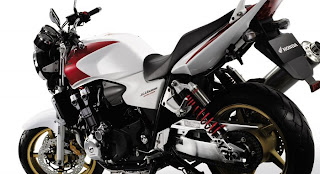 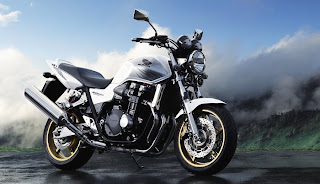 Another bike that debuted at the 40th Tokyo Motor Show was the CB1300 SUPER FOUR .
For those not satisfied with just 747 cc, this new age retro will give you a whooping 101ps of maximum power output @ 700rpm and maximum torque figure of 114Nm @ at a leisurely 5500rpm from its 1284 cubic capacity engine which means you can take it for those weekends on long drives through crafty roads and sceneric beauty aided by the large 21 litre tank. The engine is DOHC 4 valve 4-cylinder 4-stroke, but unlike the 750, you will get a water-cooled version. Bore × stroke diameter (mm) is 78.0×67.2 with a compression ratio of 9.6:1. In tune with moden mechanics, you will also be having a PGM-FI for the fuel supply with Wet multi-plate coil spring Clutch type and a 5 speed gear box. Front Tyres are 120/70-17 while it has large 180/55-17 tyres doing duty at the rear. Again twin (hydraulic) double disc at front and a single (hydraulic) disc at the rear and has telescopic suspension at the front with swingarm at the rear. For more photos, click here.
As I said, these Japs have some wonderful looking traditional bikes in their home country. Of course, there are a whole lot of bikes there and to see the entire line up of bikes, click here.