Hornet or 599 - Pick Your Workhorse 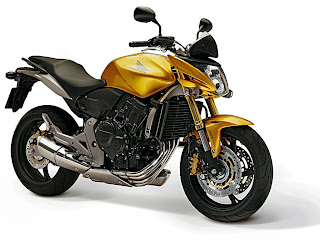 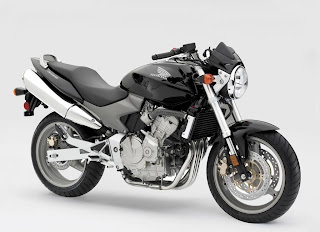 Well, its the same thing, right. The Hornet is known as the 599 in the U.S. Just because of its simple but brilliant styling, people often look over the fact that it is a total workhorse. And now with the new CB600F, especially the 'golden ' coloured one, the Hornet is all set to even more allienate the workhorse term from itself. We will come to the workhorse later, but one thing is for sure, at least to most bikers, that a 600 cc bike can be called an 'ideal' bike, i mean below the 400cc category, you sometimes miss the fun factor, in the litre bikes, due to its excessive power, you must be cautious, somehow in between, the 600 seems to fit the bill. It is in the category of SBK, but yet wont burn a hole in the pocket, or not in everyday use when with a litre bike, the next destination is always the petrol pump, it is also a lot of fun with ample power which you will need in the real world, you get the picture, right! There are a lot of 600cc bikes which will blow the pants of a litre bike like the R6, or Honda's own CBR600RR, but we are not talking about those. 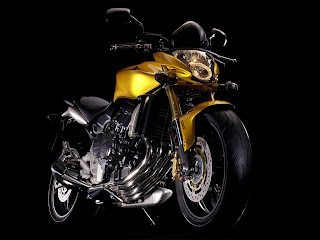 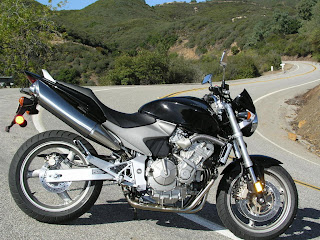 I first saw the 'new' Hornet in the 2008 Auto Expo in Delhi, India and at first glance, it really looked like an Italian, but I was expecting it, so actually I was kind of disappointed that Honda has left its roots of simple styling and trying to ape the Italians. It looked exotic alright, but very Italianish. So, how come the new Hornet end up being italian?
Well, it turns out that Honda operates a factory in Italy, building dirtbikes, scooters, and of course the CB600F. The Hornet is the most popular 600cc bike in Europe and that has been for some time now. It's stylish but practical, that is you dont have to sacrifice your arms and back to run this sports bike. Make that Point 1. It is reliable (a Honda always is!) and easy to ride. It is cheaper than most European bikes of similar capacities. make that point 2 & 3. So you can and people use it for commuting for its easy on the pocket. make that Point 4. So now you would agree if I call it a workhorse, right? 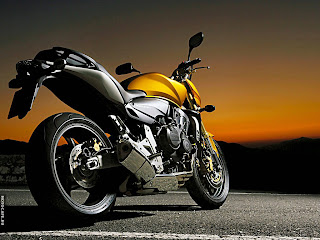 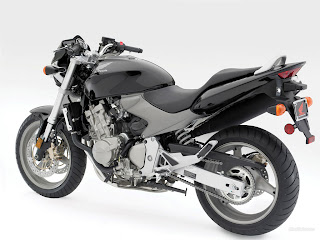 But the new 'Italian' bike has gone glam and it still very much affordable! Of course it has gone through its cosmetic changes, but the 2008 model is radical. So, who wont want a exotic looking bike for a price much less and that too a very practical 'workhorse'?
The heart is a wonderful 16-valve, water-cooled dual-cam inline-four 599cc motor powerplant. which makes a whooping 100 hp now complete with a six-speed gearbox and cable clutch. The motor is bolted into a steel-tube chassis with a large backbone. There's a steel swingarm bolted directly to a rear shock, and up front is a new inverted-fork front end. Triple-disc brakes and calipers bring you to a stop. It's a simple, elemental motorcycle, or was back in 2006 which looks very exotic now. 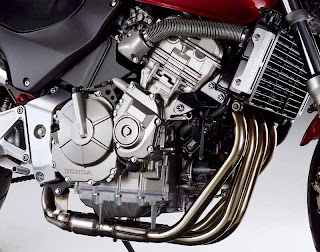 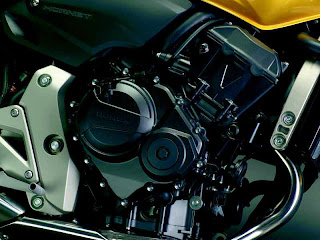 Although the Hornet, no... no... the 599 was not much of a success in the U.S, but I reckon with the changes incorporated, the erthswhile "UJM" (Universal japanese motrorcycle) as they are known in the U.S will see a sea of change. Only 10% bike of the total sold in U.S in a year are 'standard' bikes, with low riders, cruisers and Supersports making the bulk, but then will the 599 just be a standard bike anymore? There are still a lot of people in the U.S who prefer a non-finicky, easy to maintain bike and that is where the new 599 perfectly fits in.
From 2006, the instrument panel has gone digital. There is also a programmable countdown odometer, a digital fuel gauge, temperature gauge and a clock. The paint is deep and glossy, hoses and wiring are covered and tucked away, and trim covers tastefully make the naked bike look finished and sleek, a typical Honda fit and finish. Other changes in the 2008 model, ofcourse beside the increase in power are the seat height which has been minimally decreased and the tank volume. 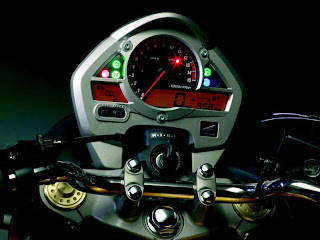 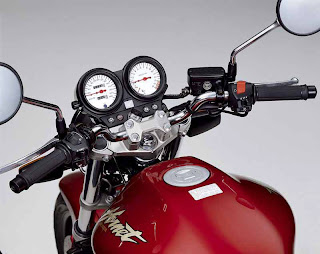 The low seat and narrow tank makes it a perfect urban type and its also light and of couse very 'Honda' smooth and has a very balanced handling.
If you are having a free day and a free ride, you will be utterly satisfied with its over 200kmph top speed in the new 2008 model. Of course as mentioned, brakes are more than adequate to build your confidence and the front end lets you feel the well-damped wheel. You can keep cruising it at 120kmph for more than a hour without hurting yourself and the little bit high handle bars with also offer an occasional motocross ride.
Anyway, you look at it, this is a 'fun' bike which is practical for daily use and some more. To say it, it is a confidence building bike if there is any phrase like it. 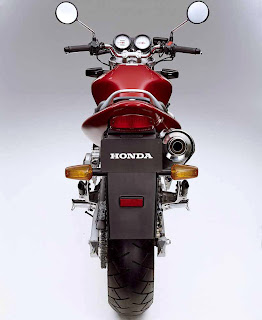 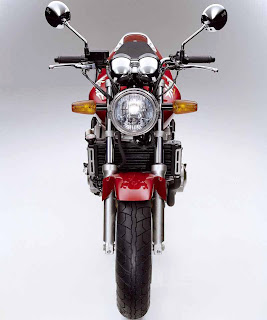 The newer model will certainly appeal to a wider audience with its new Italian styling. And yes, Honda has given some more options in thye new Hornet which are very rare for a 600cc bike. For a few hundred bucks, you can chose the combined linked ABS braking Honda CB600F Hornet model, ideal especially for new riders. The Honda CB600F Hornet fuel tank has increased in size and there is a long list of genuine accessories to personalise the bike. The new design Hornet most definitely will stand out from the crowd. At $6500 /£5000 the Honda CB600F Hornet is exceptional value for money more so because it can commute, tour, drag, motocross, you name it and it will bring a smile to your face. If you are looking for an allrounder bike, then this is probbaly the one which your wife or girlfriend would also appreciate. 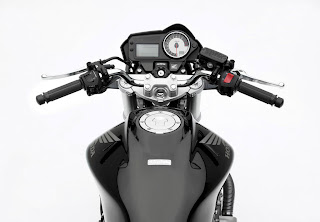 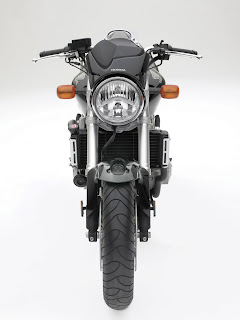 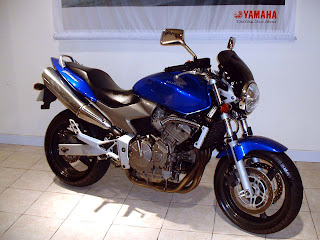 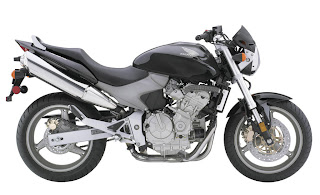