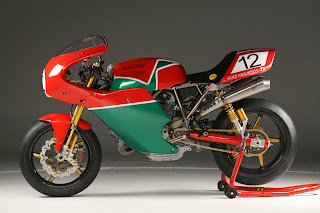 Among the many beautiful bikes being unveiled at the 2008 EICMA show in Milan one was the NCR Mike Hailwood TT.
This custom built motorcycle is based upon the Ducati 900 NCR Mike Hailwood rode in 1978 to win the World Championship at the Isle of Man TT which NCR refers to as “the most famous motorcycle victory of the millennium” which incidently was Ducati’s first world title. Since 1967 NCR has been building racing bikes from stock Ducati production motorcycles including the one ridden by Hailwood in 1978.
According to NCR, the titanium frame weighs only 5 kilos (11 pounds) contributing to a total weight of 136 kilos (299 pounds).
Only 12 NCR Mike Hailwood TT bikes will be produced, matching the number Hailwood rode under in the 1978 Isle of Man TT. This high end $130,000 bike will have titanium connecting rods, high compression forged pistons, F1-type crankshaft with a longer stroke, NCR Corse cams, titanium valves, ported heads, lighter gearbox, APTC-NCT dry slipper clutch, racing oil cooler, Wave discs and Brembo pistons, Ohlins shocks, Carbon fiber bodywork, titanium exhaust and NCR Corse EFI and electronics with full mapping capabilities.
Source - NCR Factory 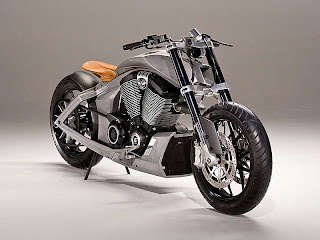 Victory Motorcycle Company unveiled a new concept motorcycle at the 28th Annual Cycle World International Motorcycle Show in New York City. Designed and built by the Victory Motorcycles Industrial Design team, the Core is an experiment to demonstrate the potential that can be reached by a performance cruiser as well as an ambassador to perpetuate the Victory brand.
Consisting of only the most raw, essential elements of a motorcycle, the name Core was chosen because it embodies the motorcycle in its simplest form - an engine, frame, wheels and front suspension. Lead Industrial Designer, Mr. Michael Song states that, “Core is pure motorcycle, we wanted to strip everything not critical and build a motorcycle that uses some of the production technologies we have incorporated into the Victory Vision.”
The bike is but a concept model and will never see production stage but elements of its design may be seen in future bikes. Mr. Song says, “The frame and engine architecture of the Victory Vision was our inspiration, but we wanted to make a statement beyond ‘custom’ and create something completely unique.”
Engine comes from the Victory Freedom 106/6 Stage 2 powerplant that churns out 97 hp and 113 ft-lbs of torque.
Source: VICTORY Motorcycles