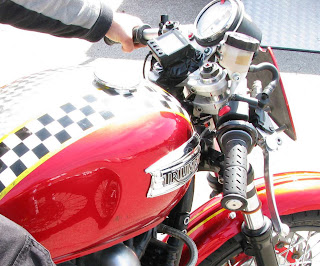 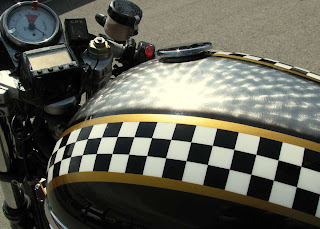 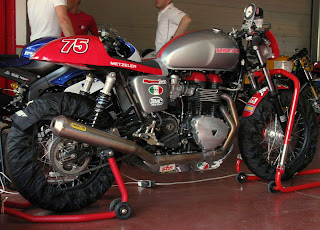 Mentioned as ‘The single-most glamorous trophy in the world’, the Thruxton Cup, came into existence in 2005. If you think 4 years is a relatively small time to bestow such an accolade, just take a look at what they are offering. The Thruxton, possibly the most desirable production factory Café Racer, now coming out with designer styles. What can really be more glamorous than that? The 2009 Thruxton Cup was organized in Italy on April 26 on the Mugello track and to end on October 18 at Vallelunga. So what do you need to qualify for this race? Loads of passion primarily, yes, if you don’t have a kit, no problem, but passion, you must have! Oh Yes! Beside the passion, your bike has to a Triumph Thruxton 900, the New-Age Retro in all its glory with its clip-on handlebars and rear-set foot pegs, it just oh-so perfect. The 2009 series will also take place on May 17 at Misano, on 28 June at Magione and September 13 at Franciacorta beside the mentioned opening and closing dates. 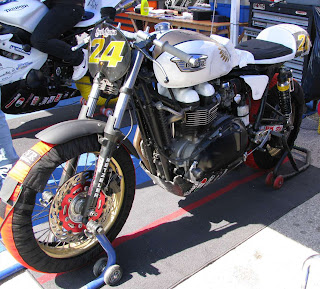 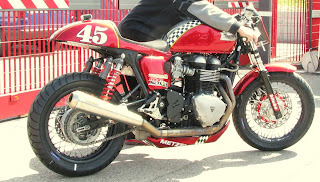 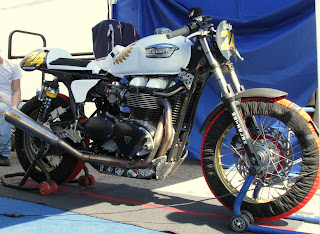 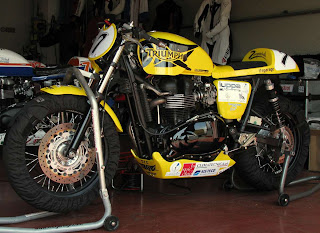 In 2005, Triumph Motorcycles of America has announced a new partnership with the American Historic Racing Motorcycle Association (AHRMA). Kicking off the 2005 season with an inaugural race at Carolina Motorsports Park on March 3, 2005 and it ended at Pueblo Motorsports Park in Colorado on September 11, 2005. It was made a regular feature at all AHRMA Historic Cup Roadrace Series events. To promote the race, Triumph Motorcycles offered AHRMA license holders an $800 rebate directly from Triumph. It was a 19-round national series. There are also other set of rules like only a certain modification will be allowed on each bike, fenders, bodywork and wheels must remain standard, and treaded tires are required. The only modification allowed to the engine is multi-angle or radius valve jobs, but the exhaust system and jetting may be changed. All these are done to keep the series competitive. Ted “Cannonball” Cobb was the first winner of the Thruxton Cup in 2005. Well, he also got a chance with his family to see the Triumph factory beside the $2000 prize money. The 2006 edition was also organized by AHRMA.
As for engine specs, the Thruxton 900 features a 865cc, twin-cylinder four-stroke with eight valves; 69bhp at 7,250rpm, 53lb ft of torque at 5,750rpm with Five-speed gearbox and final chain drive. The top speed is a satisfactory 165kmph and this is no guzzler. For more information on the 2009 Thruxton Cup, visit the Triumph Italy website.