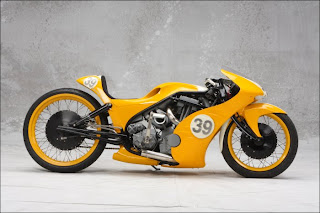 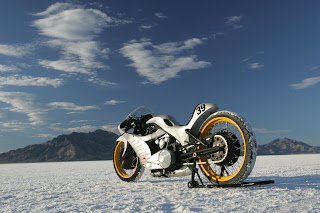 So when does a bike or motorcycle or a 2 wheeler stop being one and becomes a visual quotient? The general belief or logical reasoning would say when you have state of the art elements on a bike and it defines retro or futuristic images added with that something extra which makes it stand alone. Somehow or the other, Roger Goldammer has always always been the odd man out. His bikes do not ‘show’ any state of the art features, his bikes do not have a retro or modern or futuristic look, his bikes are not even cool if you measure cool by say a Confederate or even a Ducati. All his bikes do are win championships at wherever it participates! The king of custom building is really the odd ball here for what he envisages, others can’t even comprehend. His bikes are not just custom bikes, this is one custom bike designer who always works more on the machine then the get up and just to tell you, his get ups are fantastic. But it is the machine that Roger works his charm that has given his living room a look like a trophy collector for the numerous trophies he has won.
What you see here is the Goldmember, an awkward looking bike at the first instance and then it will gradually grow on you and to such an extent that you would probably feel like spending the next few days and nights working on your bike. There were earlier posts on Roger’s machines, Nortorious and ExperiMental in this blog and why I am saying this is because to know what goes inside that head of his, you need to go through the post. 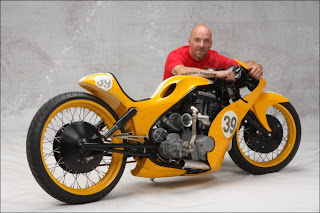 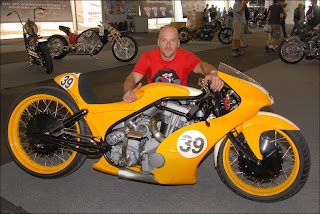 Okay, moving on to this post, what do you see, a elongated yellow coloured bike with no headlamps (so, okay I get it, this is a race bike), a race bike with a 3/4th fairing and what an odd kind of fairing is that! Did I say race bike? But it has spoke wheels and would you look at that, there are no disc brakes either. Surely Roger must be crazy to make something like this. Ummm… no, not exactly, geniuses do have the ‘crazy’ thing going, but I don’t think the guys at AMD does or else why would they award the 2008 AMD World Championship title to this bike? So you know there has to be more than meets the eye, right, but let me tell you, the bike doesn’t even have an electric start. I guess guys at the AMD have realized that choosing a motorcycle for any category doesn’t mean the bike has to have very sweetly multicoloured with everything you can throw at or having the world’s best chrome paint on two obnoxiously long handle bars, customizing is more than that, it is that, but there is more to customizing a bike as Roger would make you believe with his creations.
All of Roger’s bikes are meant to be ridden and outperform its class (that would be really difficult in one way as his bikes are in a class which has only his bikes, anyway) and not only just perform, his bikes perform at the grandest stage of ‘em all, the Bonne Salts. How thus a bike averaging at 160 mph sound to you, I repeat averaging, not top speed. Well, that is what Roger’s customized Goldmember is capable of and has also ‘been there done that’. 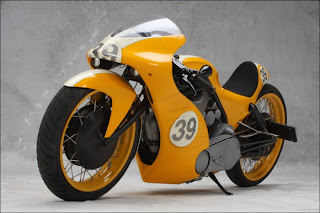 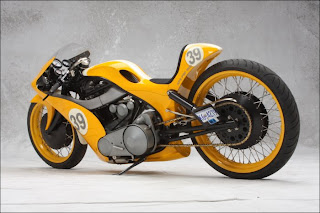 If you are not a first timer on the Goldammer bikes, you would probably start off with a long look at the stunning designs he creates. Okay, I lied about the ‘not having disc brakes’ part. I am sure you knew that too. Just like the Nortorious, both of the wheels have disc brakes beneath the specially designed hubs which give an overall image of having drum brakes. But believe me, you really have to kick start the bike.
So what goes inside the Goldmember? The Goldmember is equipped with a custom 960cc, liquid-cooled, single-cylinder engine using modified Harley-Davidson cases and a supercharger and nitrous in addition to its streamlined bodywork. Yes, he still believes in single cylinders just like his Nortorious and ExperiMental.
The gentleman from Canada that he is, he is known as a soft spoken person with a sense of humour and always eager with his inputs. His favorite bikes are the Dirt bikes and Sport bikes and it is not hard to tell but taking a look at his creations. What he builds is unlike anything that even remotely comes close. I am still repeating you need to go through the earlier posts to know how this man thinks and works. He has removed the staid image of custom build motorcycles as flashy chopper designs with a ready made HD engine with what actual custom designing should be like, radical to the extreme, yet very appealing and always carrying the core of motorcycles – performance. Many people just might lose the fact that his creations are a visual delight actually, what happens is that people are so taken back by his brilliant engines that one would often tend to look at the performance sheet and miss out the visual gratification. 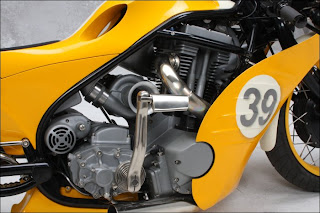 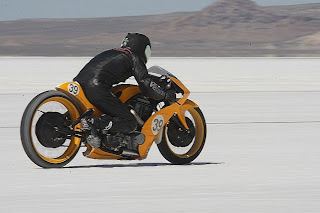 The Goldmember made an entry into the Salts at 2006 and that was before winning the AMD Championship in 2008. So focused he is on the performance front that for him, it is much more critical that his bikes have the performance to boast of. And when that is done, it also gets easy for the AMD guys to choose it as their favorite bike since visually it stands apart from the herd.
For the Goldmember, Roger specifically wanted something which had a real performance to speak of and yet compete at the highest level (the World Championships of Custom Bike Building), something no one has tried before, no, let me get that right, something no one has thought before and these kind of ideas come only to this man. Just close your eyes and think about a custom bike and think about the performance of the bike. What comes in your imagination is you in a chopper cruising along the desert roads, right. That is what Roger has broken away with it. That is what I meant by saying that Roger does what others don’t even think of. Before the world knew Roger Goldammer, performance and custom bikes were like poles apart. Performance bikes are plasticky bikes all covered up with not much of an appeal while custom bikes are usually all show and not much of a go. And the twain shall never met. At least till Mr. Roger Goldammer came along. It was along such a decision taken with a friend when they casually thought of a single rear cylinder mounted on the front with fuel injection and Roger added his thoughts as why should he stop at that, but rather a full blown, electronic fuel injected, intercooled, single cylinder H-D-based-engine running on nitrous. There you had it, this man just cannot think simple. So he thought of adding a supercharger too. 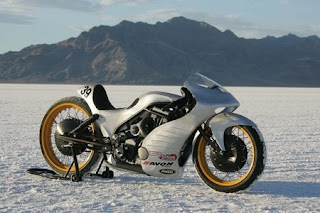 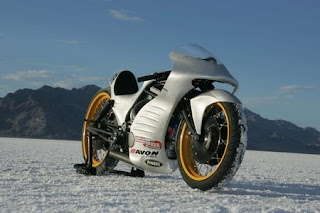 As expected, lots of in house manufacturing from the camshaft which was made out of two cams to changing the push rod angles went in the bike. The engine was rotated back 15 degrees and moved closer to the transmission. Of course those disc brakes in hiding had to be in house and so were the spoke wheels. Roger mentions that the wheel and its nearby including those hubs and brakes took a lot of time beside hard work and determination. Overall, starting from the frame to the front end which has ‘shock inside neck’ to the swingarm to both the wheels and brakes were made in house. Transmission is through a six-speed Baker gearbox of Baker. Roger usesd a Rotrex supercharged inlet pipe and the forward to provide sufficient air to create the highest capacity possible. The inlet on the body is designed as such to let in flow direction of the wind engine which will of course increase cooling capacity and maintain a temperature limit even if the vehicle operates at full maximum limit. I searched a lot on the net to know more about the engine, but came up with nothing more. If any of the readers have any information on it, please forward it.
Roger Goldammer wanted his Goldmember to look as simple as possible and that was the reason of those spoke wheels, disc brakes that looks like drums, a plain three quarter fairing, etc. But to do all thos in other words, to make the bike look simple was the most difficult part in fact. Probably that was a part which the AMD guys were impressed it and made it a winner. The engine and all, well that was probably the reason that stretched the gap between this bike and the runners up by more than 150 points. 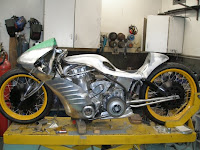 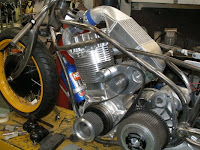 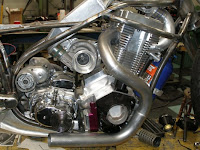 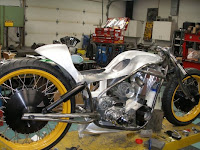 Visit the Roger Goldammer website but the site has not been updated and there is not too much info on it. Or if you live in Canada, you may visit him at his workshop cum home at Kelowna, British Columbia or you can phone (250.764.8002), fax (250.764.8022) or Email (sjgoldammer@shaw.ca ). Source of pictures and info for this blog were sourced from AMD Championships, Kick Ass Choppers blog and Bikernet.
The championship winning bike was painted in yellow with the number 39 by Jerry Ashley while the nickel plating and chroming was done by Southwest Forge.
Specifications
Engine Make / Size - HD V-twin based 965cc single cylinder.
Transmission - Baker 6 speed
Frame Make / Type - Goldammer chromolly
Front End & Swinarm - Goldammer- girder, shock inside neck &Goldammer
Wheels Front & Rear - Goldammer Buchannons 19" & Goldammer 23"
Front & Rear Brakes - Goldammer Internal disc
Rake & Stretch - 35° & None
Tires Front & Rear - Avon 120/70/19 & 130/60/23
Additional Info - Rotrex supercharged, fuel injected, intercooled, nitrous oxide injected single cylinder Harley-based engine, rear head on front cylinder, hand made camshaft, Pingel electric shifting.