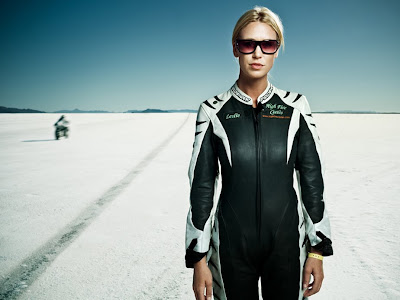 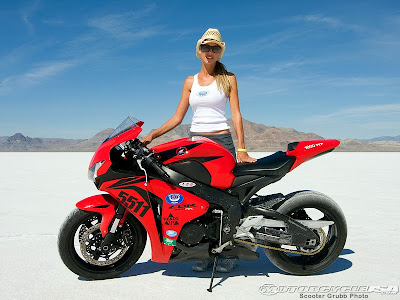 Tell me one red blooded male with hormones who doesn’t like bike and babes or babes on bikes. The girls are everywhere, from race tracks to being umbrella babes, from being calendar girls to Auto Expos to being brand ambassadors for big companies, they are everywhere and we love it. They certainly bring on the oomph factor. I mean, can you guess suited clean shaven boys or men standing by Rossi with an umbrella or smiling to you sitting on a prototype in EICMA! Not that we don’t associate these beautiful ladies with respect, but somehow they are more associated with being eye candy and bringing a smile to your face. The only place where they are less seen is atop these machines while running. But we still love them whether they ride or not. Just then there comes a distinguished lady with killer looks who can ride a motorcycle better than most men. And not only does she ride better, she has world records (records, not record) against her name, she owns a used motorcycle shop and she races on the Salts. This is where eye candy or smiles turns into admiration and respect and this is what Leslie Porterfield commands. 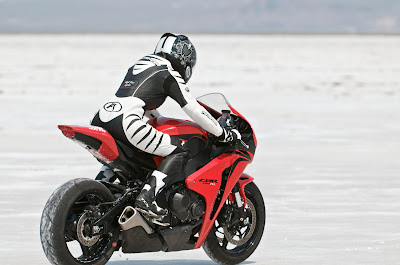 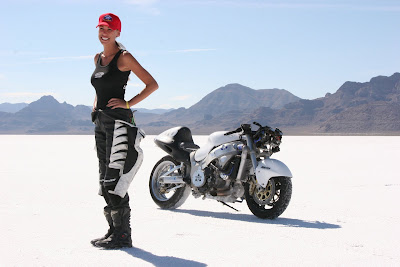 For starters, she is the 2008 AMA Racing Female Rider of the Year, she holds three land-speed records and is a member of the Bonneville 200 mph club. She is also the owner of High Five Cycles, a successful, used motorcycle dealership in downtown Dallas. And she has been riding since she was 16 and now she is only 32 years of age. How about that for a resume? So what does the beautiful lady prefer among 2 wheelers? Ms. Leslie rides a modified Suzuki Hayabusa, which she recently rode at the BUB Motorcycle Speed Trials clocking at 234.197mph, that’s 374.715kmph. No, I am not kidding; check the BUB website and the official timings. So what does that make her? Ms Porterfield is now officially the fastest female motorcyclist in the US. Of course she is also the first woman to enter the Bonneville 200mph Club on a conventional motorcycle (conventional motorcycle means motorcycles which can be road driven, not those streamliners you see at these trials). 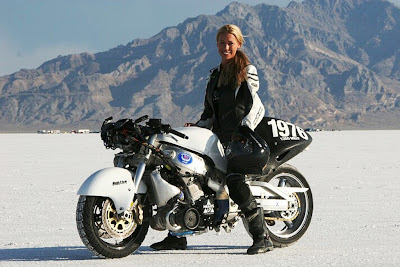 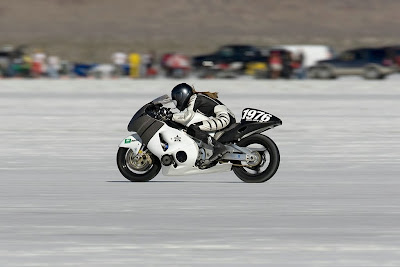 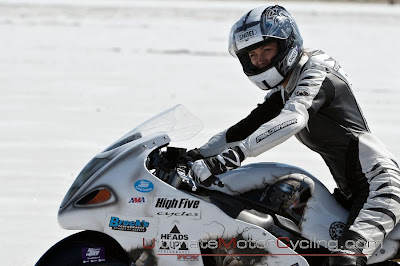 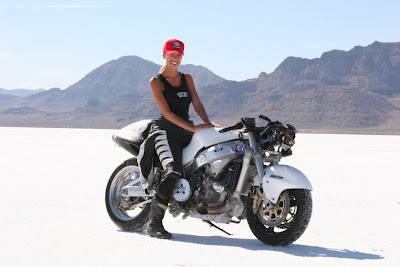 With that kind of a resume, Leslie doesn’t have a problem finding sponsors and if you look at her website, you will notice both sides of the pages flooded with sponsor which include some world renowned brands like Arai, Airtech, Falicon, WPS, Fieldsheer, Heads Up Performance, Apex Speed Technology, Worldwide Bearings, PMR Components, PMP Sprockets, and Spider Grips. 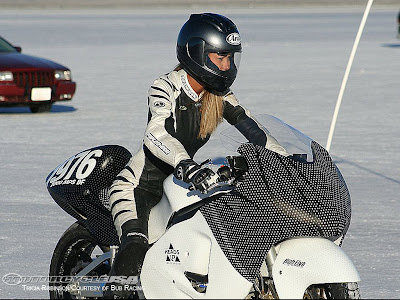 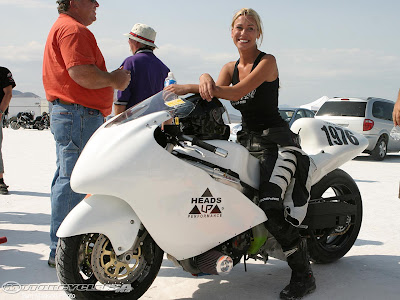 Her Busa is a 2002 model, modified by Scott Horner of Head's Up Performance and Rhys Griffiths of Apex Speed Technologies. The bike is turbocharged with Airtech bodywork and a ECU from Apex. She also has a Honda CBR1000RR (the one pictured in red) which she ran in 2008 in the production class which has only a few modifications since it runs in the ‘production’ class, so there are limitations. The bike was re-geared and a Bazzaz tuner was added and guess what! She clocked 192mph on the bike, which is also a world record. The charming girl also gets her hands dirty with the tools and oil and she is quite a capable mechanic and for that she thanks Scott of Head’s Up Performance. Rhys of Apex Speed Tech gives her lessons on the electrical and electronics front. She also helps the staff in her Dallas used motorcycle store, High Five Cycles, and says, “It's not uncommon to find me in my service department doing oil changes, cleaning carburettors, swapping chains and sprockets, or dismantling something we're sending to the painter. I've done a lot of car repairs, too - everything from changing starters to rebuilding an automatic transmission, to swapping rear ends." The girl knows the machines in and out. 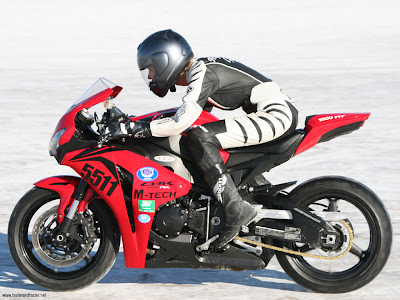 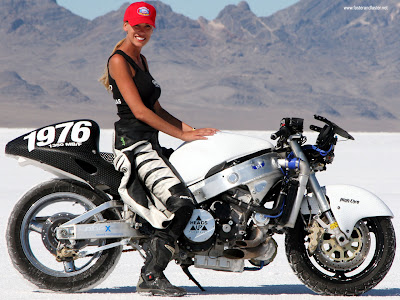 It didn’t start all very well for Leslie. In 2007, she had a crash speeding at over 100mph which resulted in seven broken ribs, a punctured lung and a concussion. Prior to the 200+ mph run on the Busa, she had touched 196mph which had her convinced that she could do a 200. But 2007, the year of her debut didn’t go well. But for how long can you keep talent done. So, after 1 year, she did what no woman had done before. Media pressure of course built up being the first lady in the Bonneville 200 MPH Club and again she showed that she is no flash in the pan with 2 other records of which one was with the Honda. The other record, well she bettered her 209mph on the Busa with a timing of 232 mph run on the turbo Busa. Along with the 2008 AMA Female Rider of the Year, she also won the Women’s Spirit Award at the BUB awards banquet. 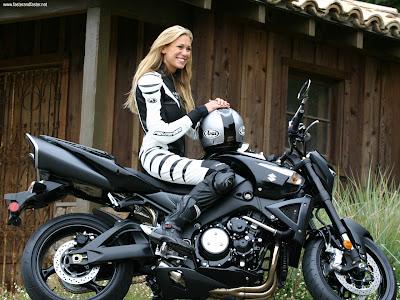 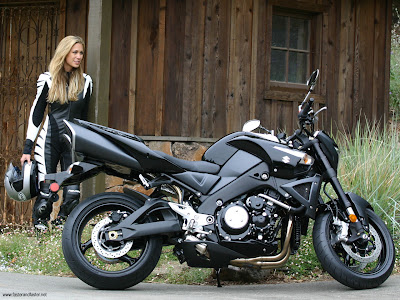 So how many bikes do the lady own. Nine in all. Beside those two, she has a Ducati 998 which she uses for transportation when she is at home. She had a few runs in drag strips and she loves motocross, but says she is terrible at it. She does own a CRF 450 motard on which she likes to have fun in the city. She did receive tickets (not the good ones, the ones you get when you over speed), but that has been in the past. And of course she loves MotoGP and admires all the riders. But her talent is not only limited to 2 wheels. She holds an SCCA car road racing license and have pre-ridden the Baja 1000 and looks forward to participating in the race. – would love to participate in the race sometime soon. 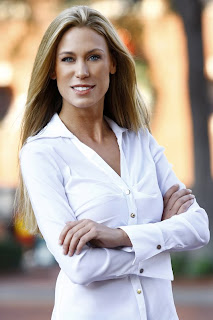 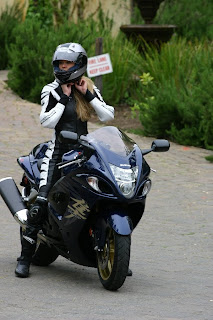 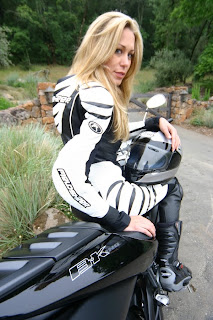 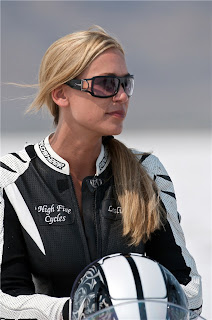 Faster and Faster had an Email interview with her and she came up as a really regular girl with no airs whatsoever. Here is the direct link to the interview post.
From the interview… She has a BMW Z4 M coupe which she is very fond of besides sinking her teeth at Pepperoni Pizza. The Audrey Hepburn fan, contrary to what her image could stand for (read tom boyish) is actually very girlie and loves romantic movies. But of course being who she is, she had to love ‘On Any Sunday’, ‘World’s Fastest Indian’ and the likes. In the interview, about her famous run in 2008, she mentions “I had to put those thoughts out of my head this year. After my first pass down the salt, I was back into the groove and ready to break some records. In all competitive sports, there are risks, and I try to minimize mine as best I can. I made a pass at 231mph to qualify for the record, and on my return run I was at around 240mph when I threw a rod through the cases. I was lucky and thankful that nothing locked up. I still managed to average 234mph on that run, which put my new world record at 232mph. It also earned me the title of the fastest woman in the world on a motorcycle. I was thrilled, even though I had a gaping hole in my motor!” 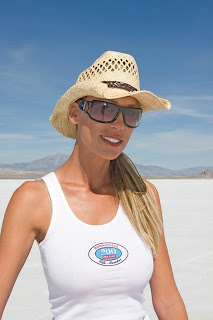 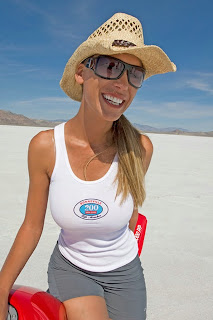 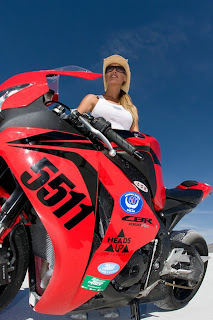 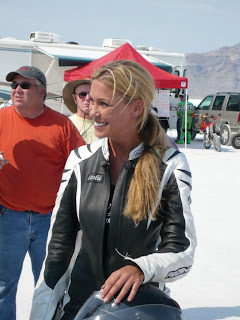 The 2008 speed runs were initially dampened by constant rain which made the run’s traction to a minimum and records were doubtful due to this. But conditions got better as the week came to a close. Worth mentioning is that on the meet's final day, when Leslie made the record, it was soon broken with just minutes to spare before the Speed Trials ended. Nonetheless, Leslie’s record run netted her the BUB Enterprises-sponsored Top Time Award for "sit-on" motorcycles (as opposed to fully enclosed "sit-in" streamliners), the first time this prestigious prize was won by a woman.
This elegant beautiful lady can pass up as a model any time. With deep and due respect to all ladies, she could easily have been a umbrella or pit girl or whatever she wanted in the glamour department, but she didn’t want to be one-of-the-ladies, she is a star, the main attraction and what a way to get noticed!
You can visit the Leslie Porterfield website which I guess she manages on her own and you can also have a look at the High Five Cycles store. For her records, visit the BUB website. Photo credits as per mentioned in the photos.