Yup, nice looking bike, that one! Very well customized. Would I be insulting you if I would to ask you the donor bike? If you think that will be insulting your intelligence, then I would surely challenge you. So now it seems that you are taking a rather detailed look at it. Yes, yes, go ahead. So you still think it’s the Duke or rather any of the KTM twins? I can assure you it is not. For a hint, how about that the bike is called as the most beautiful naked bike among all current bikes produced? A little down south from Austria where KTMs are made, you will find the country of its origin, Italy and that my dear friend is the Brutale ‘Bestiale’. Bet, you didn’t think about that! But it is a MV Agusta Brutale. Still not convinced, right? Neither was I when I saw it for the first time.
Now you must have heard about Mototuning, the French company who specializes in well, tuning. They have done their magic on some of the bikes featured here. But the better part is that they have a gallery and you can all post your modified bike there. If the post is too long to read, I suggest you go through the last para which will surely hold your interest. So, somehow I never visited their website and finally when I did, wow! To clear any doubts about that bike, just go to this link and you will be convinced. This Bestiale is designed bya guy named Yacouba Galle. Will most definitely make a special post on it. Changes include a Hull rear with new front lighting, radiator scoops, redesigned exhaust, new tail light and of course the new carbon body. If you notice the 5 star alloys does indicate the MV stamp, but overall at first glance, its impossiblt to recognize it. I think most of us would anyway confuse it for the KTM at the first glance, but the detailed carbon work is really excellent, the headlamp, rear panel and the side panels, all very angular and kind of diamond shaped.... it overall gives a very 'Italian' styling or would you say probably better, a la French! 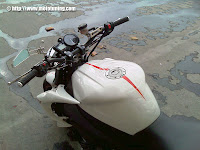 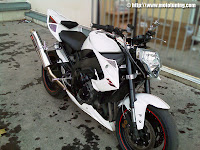 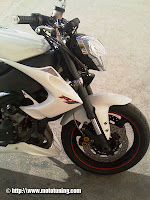 Now take a look at the above pics, again something very radical and you won’t be able to guess the donor even here. Take 3 guesses (its turning out to be a nice game, eh!) and then get this hint… it’s officially the best liter bike of 2009 in the Supersports category. Yup! It’s the R1, nicknamed ‘Philippe’ and 'R1 Street' respectively and I can sense the disbelief you are having, so here is the link direct to the page of Phillipe to convince you. Well, the names of the custom builders are not given. Changes to the original 2004 R1 include the rear hull from a 2006 Yamaha R6 along with the rear mudguard from a 600 RR while the front mudguard is retained from the original, Nikko Racing mufflers modified with aluminum, Harris Grips, fork head from a Kawasaki Z750 modified with stainless steel plate, custom foot rests, brake pedal, switches, etc.How can anyone say that this is an R1. The second R1 with the creamy white paint is taken from the new Fiat 500 (Fiat Yamaha, anyone!). It has aviation hoses at the front and a very fat handlebar for its Street Fighter image. The rear hull is from a 2004Honda CBR 1000 RR and those beautiful mirrors are accessorized from Rizoma. Looking at the Brutale previously and these two R1s, you get an impression that they are more into Street Fighter style modification. Wonder what they would do to the Ducati Streetfighter! I did search for it, but I guess its too early, I mean the Ducati Streetfighter has been in the market only recently, it would really be interesting to see what they could do to that naked streetfighter. Probably a chopper! 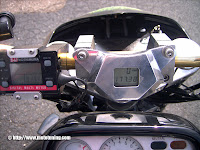 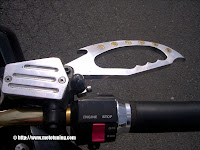 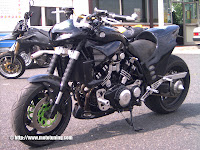 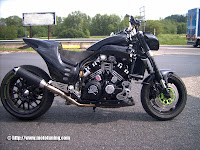 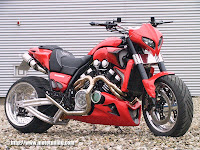 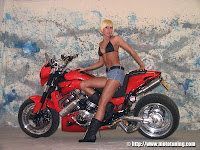 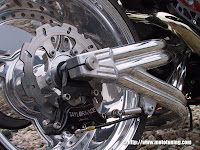 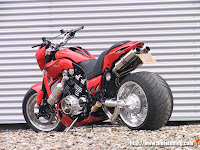 The above 2 should be easy; I mean the engine look gives it away. While the one in black is named ‘Matrix’ for obvious reasons, the one in red is called ‘Techno Bike Shotgun’. Now these are the bikes where Mototuning has done their speciality. They have made monsters out of these engines. A Dynojet Carb Kit Stage 7 (?) has been installed for boosting the power of the monster V-Twin. 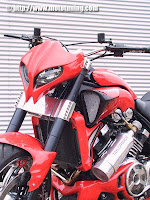 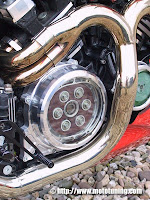 The website writes “Its engine block inflated 1500cm3 propels you in a parallel world without the need for blue pill.” Remember the blue and red pill from the original Matrix!OHLINS Mono shock from Kawasaki ZX-6R, a modified radiator from Kawasaki ZX-9R and look at those brace knuckle styled lever and the futuristic counter from Yoshimura. And if the Matrix is here, can Trinity be far behind :-)
The ‘Techno Bike’ has a inflated 1570 cc engine galloping with a whooping 205 horses! To support the mass, you will have Carillo rods, Beringer cylinders with Otec Cylinder sleeves and the monsterous power is delivered with the help of J.E. Pistons, a Dyno Jet, of course it would look tame without a NOS Nitro Kit, so there you go! It has handmade exhaust by Dave Leonard and special made silencers by a firm named M.T.C. The modifications are done by an unit named ‘Taylormade’, like those extra beefy yokes, the front wheel of size 4.5 x 17, rear wheel of size 17 x 12.5, the 320mm disc brakes, the 6 piston front brake caliper, the 4 piston rear brake caliper, those shot gun alloy swingarm, all in all, this is the perfect V-Max for those who love to drag race. 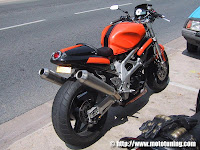 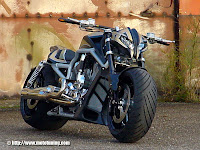 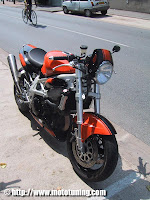 Mototuning works on all the major brands, including the Jap 4, Triumph, KTM, MV, Ducati, HD and they do a lot of choppers and custom bikes, I mean customs as in the ones we see on T.V. There are lots of home-designed choppers very very well done. There speciality of course still remain tuning not so mundane bikes to monster proportions. Look at the bikes above, these are the Monster 900, priced at € 25,000 all inclusive with the bike,then comes the Hornet 600 Matrix, which has been designed by MC16 in entirity, i.e. the whole bike has almost been transformed except for the engine, the front of the frame, the wiring harness and the radiator, rest of this HORNET has redesigned to give it the 'demonic' look. I found at least 2 dozen of customized Hornet all looking very different from one another. The third is my personal favoirate being a Cafe Racer and this is the TL 1000S Cafe Racer designed by Moto Champion and then we have the V Rod Techno bike which looks so futuristic although I didn't find any tuning if done on this bike. But look at it, it seems they have outdone the very beautiful V-Rod too. I although have one thing to confess. Mototuning as far as I know, is or at least was into tuning only. So I also have some doubts whether some of the bikes where no custom builders name has been mentioned are done by Mototuning themselves or that if these bikes are customized by the clients who wants to tune their bike at Mototuning. Actually the site is in french, so its little difficult to go about it, but what the heck, these are some nice examples of custom modification and since this blog is alla bout Visual gratification, it does serve its purpose! I would really be glad if someone can correct me on this. 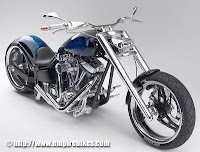 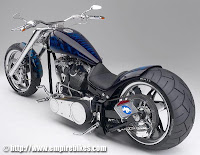 As I mentioned, they do a lot of choppers too. But not the mods, just the tuning. But the bikes look so good, I thought I just might post a few. The first one in red is the Krugger Street Machine, a Harley Evo engine of 1340cc. The bike has been done by Krugger, yes that famous guy who regularly ends in the AMD podium. You might remember a post here on his Half Day. The bike is named Cad 22 and is also featured in the Krugger website. The multi coloured very elongated chopper is the Santiago Chopper . Not much info, but that rear hydraulic shock absorber do stand out. You can visit the Santiago Chopper website, who specializes in Bobbers, Choppers and Trikes. Another of those 'Guess-The-Bike' is this amazingly done Buell S1 'Hen Robber', yes a Buell chopper. Rare, isn't it? It is customized by Dub Performance, another french custom builders. The last bike in pristine blue is done by Empire Bikes of Germany. It is nicknamed And look at that beautiful handcrafted mudguard. Visit their website for the amazing collection of customized and tuned bikes. They, of course sell accessories too and not just that, specialized tuning kits for your bikes. Visit the entire list of tuning kits available here. If you have a Jap bike, you will find a lot of things to enhance your bike performance. Thats why I said to read the last para of the post. Just take a look at the link. They also have a special on-line shop where you can buy your boots as well. Want DVDs, no problemo! Credits mention that it is a non-profit organization, I surely didn't understand that, if someone can make it clear, I would be grateful. Probably they mean the gallery featuring the bikes. Its a French website, so you will need google translator probably. Anyway, enjoy your stay there. Oh! Yes, some of the bikes are really really well tuned, you will know what I mean!