DUCATI Apollo - A Bike much Ahead of its Time 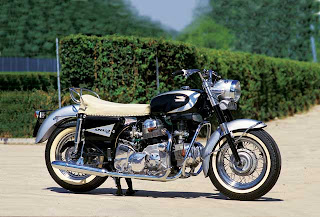 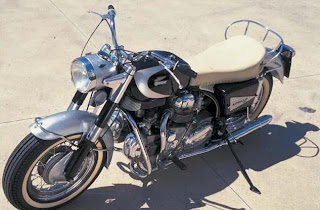 I guess not many have heard about it. Ducati to the current generation and my generation (Generation X) are symbolised with red or yellow super sports bikes with the distinguished front lights. But in the early 6os, Fabio Taglioni made a 1260cc V four which is all about the APOLLO. Only 2 of such engines were built, one of which is now on display at Ducati's factory museum in Bologna. No one knows about the second. Maybe because only 2 were made, the Apollo today enjoys a mythical reputation like the comic hero Phantom, revered and with awe. At that time, 85% Ducatis were sold in U.S. The Ducati U.S wing, lead by Joe Berliner was rich in finance and it wanted to make an impact in the cruiser segment, U.S favorite motorcycle segment. Of course Harley Davidson was a big star already and Ducati wanted to take the HD brand head on. Discussions went on with Ducati Italy and they agreed that Ducati U.S will provide the financial aid to its parent corporation in Italy in lieu of that U.S would be allowed to dictate the prototype’s specifications. The stipulation was that the bike should have an engine bigger than anything in Harley's range, which was then topped by the 1215cc FL-series models. The remainder of the technical specifications was left to Taglioni, who decided on a 90-degree V-four. 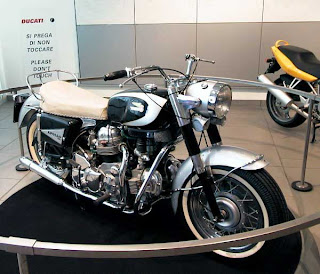 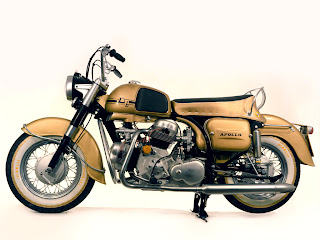 So what was the engine all about? The V4 had a perfect primary balance that negated a counter balancer, even with 180-degree crank throws (each pair of pistons rising and falling together) and separate, differentially finned air-cooled cylinders. The two valves per cylinder were operated via pushrods and rockers with screw-type adjusters, while the horizontally split wet-sump engine featured a single crank running in a central support, with each pair of con-rods sharing a single caged roller-bearing big end. Taglioni considered liquid-cooling but rejected it due to complications and bulk, and although shaft drive was suggested by Berliner, Taglioni didn’t incorporate it as he didn’t find the shaft drive trust worthy, so he went for a duplex final-drive chain. With the cylinders of the mighty 1256cc engine measuring 84.5mm x 56.0mm, the Apollo's V-four motor was the most oversquare design Taglioni had ever produced for Ducati. It was installed as a stressed member in a beefy open-cradle frame with a central box-section downtube between the front two cylinders. With specially developed Ceriani suspension, the Apollo's handling was certain to outperform Harley, which had only recently discovered rear suspension. The full-width 220mm single-leading-shoe front and rear drum brakes didn't promise much and what lead to it? We will see... 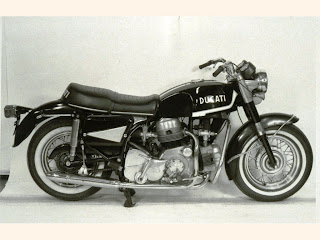 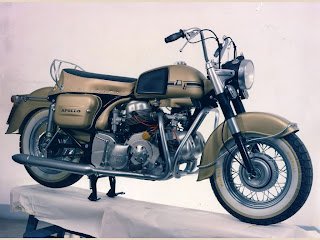 Anyway, an electric starter similar to the one used on a Fiat TV1100 was also featured. A massive generator was fitted in order to cope with the additional load imposed by sirens, lights and radios. Relatively compact, the alloy V-four engine allowed the Apollo to favorably compare with its Harley rival, weighing 596 pounds dry with a 61.2-inch wheelbase vs. the American V-twin's 62.2-inch stance and 640-pound weight. Ducati test rider Franco Farne was the first to ‘test’ it and he said "it handles like a truck,". “Perfect” said Berliner as this was strictly ‘The American Way’, and the Ducati Berliner 1260 Apollo, as the bike was officially known, was unofficially born. The engine had a helluva straight-line performance, delivering a claimed 100 horsepower at 7000 rpm (vs. 55 hp for the Harley) and good for a top speed in excess of 120 mph. Pretty impressive for its day. But also damning, for its meaty performance was the Apollo's primary downfall, a fact confirmed by Ducati tester Giancarlo "Fuzzi" Librenti, who was the first to suffer the heart-stopping experience of having the specially made 16-inch rear tire come apart at high speed on the autostrada. 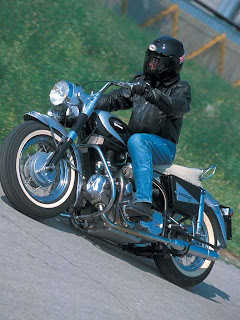 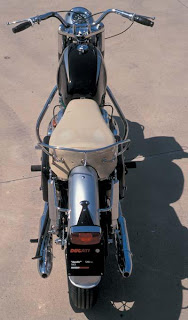 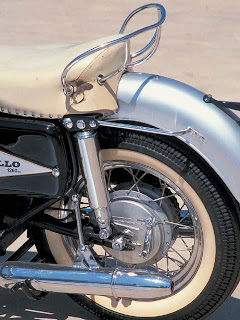 The agreement called for Ducati to construct two prototypes and two spare engines. The first of these, painted in ritzy metallic gold and sporting a huge cowboy saddle fitted with a chrome grab handle, was handed over to the Americans in a formal ceremony in March, '64. Ape-hanger handlebars, deeply valanced fenders and fat whitewalls completed the Italo-American styling, which made the Apollo look much bigger and bulkier than it really was. The second prototype looked more tasteful, with leaner fenders, altered side covers, and a more discreet black-and-silver paint job--albeit still with the Wild West seat. While testing proved the Apollo had plenty of power, it was quickly discovered that Librenti's experience was not an isolated incident. The V-four, combined with the bike's heft was too much for the 16-inch tires, even after power had been reduced to approximately 80 hp. Alarming stories of riders nearly killed in high-speed testing filtered back to Bologna. The solution was to detune the twin-carb version of the engine further (to 65 hp), adequate to meet police performance specs and still superior to the Harley, thanks to the V-four Ducati's lighter weight. This finally cured the tire-disintegration problems. But this effectively ruled out selling the Apollo as a luxury sport-tourer because its power-to-weight ratio was now inferior to the BMW and British twins that would have been its import rivals in the U.S. market. Joe Berliner was so confident in the bike's potential that he'd already begun marketing the Apollo in the States, and printed a brochure quoting $1500 for the touring version and $1800 for the Sport--substantially more than its European twin-cylinder competition and double the cost of the equivalent Harley. At that price, the Ducati would have had to boast an additional edge in performance to justify the extra cost, but in detuned form it could not. 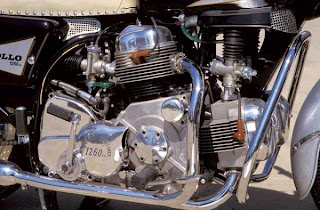 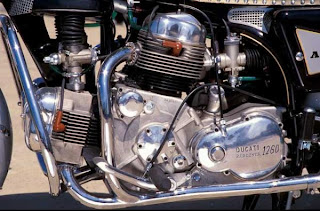 With the V-four set up to deliver the right kind of power to meet the marketplace demands, it would be lethal until tire technology could catch up. This situation provided the perfect opportunity for the bureaucrats in Rome to kill off a project they'd never had faith in and only agreed due to the U.S wing pressure. Citing the fact that the model was now suitable only for the specialist police market, the bureaucrats claimed sales would be insufficient to justify the immense tooling costs involved in gearing up for production. Berliner, who had already successfully demonstrated the Apollo to selected police chiefs, was appalled. He had promised that production of the reduced-power version would commence in '65, yet now the whole project seemed in danger of collapse. So it proved. Further funding for the Apollo was withdrawn, and Montano was reluctantly forced to cancel the project early in '65, leaving the second of the two prototypes constructed to head straight back from Daytona into the Berliner warehouse in New Jersey, where it remained for the next two decades in a corner of the storeroom--a sad reminder of a motorcycle killed by a mixture of government infighting and its own advanced specification. The Apollo was simply too much, too soon. As an indication of how proud he was of the design, though, the spare engine sat on display in Taglioni's office for 20 years until his retirement, a silent testament to his versatility and farsightedness. 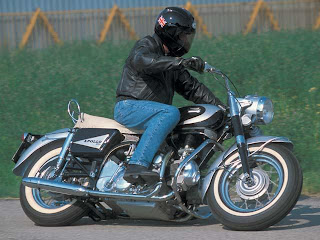 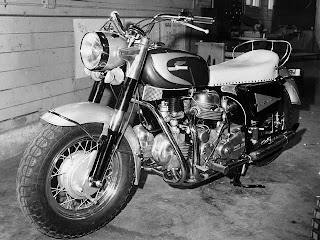 However, the memory of the Apollo lingered on, for as a prophetic article in Italy's Motociclismo magazine suggested when the existence of the Apollo was first revealed in '63, one half of the engine would provide a superb basis for a range of 90-degree V-twin models. Five years after the project's demise, Taglioni proved the worth of that assertion when he designed Ducati's first ohc, 750cc V-twin, closely inspired by the Apollo's architecture. In '86 Hiroaki Iwashita acquired the Daytona show bike, the second of the two Apollos built, Iwashita bought the Apollo for $17,000, big money back then in 1984 as top of the line Harleys presently cost that much. The bike was secreted to his private collection in Japan until '95, when he displayed it at a vintage bike show in Tokyo. This alerted Ducati to the bike's existence, and when the factory museum was established at the end of '96, it became a centerpiece exhibit. What a bike, it is most assuredly a million-dollar motorcycle in 2007. At just 29.5 inches high, the plush seat is low enough to throw a leg over easily. Bike journalist Alan Cathcart got to ride the Ducati Berliner Apollo for Motorcyclist magazine. ‘Once astride the Apollo, you're immediately surprised at how low slung and slim it feels. The high, pullback handlebar is very ’60s, and combined with the well-placed footpegs, delivers surprisingly comfy ergos. Just chill out and cruise,’ says Cathcart. 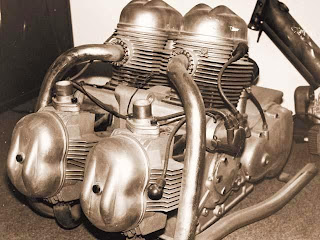 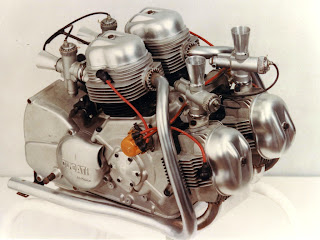 ‘The engine sounds like an American V8 rather than an Italian four, and the Apollo’s exhaust note is quite loud and very unlike that of any Honda V4. I was impressed with how smoothly the Apollo took off from rest, even with the clutch slipping slightly, though upshifting through the gears brought the Apollo's age to light. Once securely in gear, the Apollo thrusts forward eagerly with a long-legged feel, especially in the intermediate gears’ says Cathcart. He continues 'Compared with a pre-Isoelastic British twin or any Harley ever made, the Apollo is a sewing machine to a concrete mixer in terms of vibration and riding comfort, with only a BMW Boxer of the era delivering anything close to the same smoothness. Out of respect for the bike's rarity, and the lack of any spares, I didn't rev it out. But even at a higher rpm the same unruffled, lazy-feeling response we came to take for granted a decade later on any V-twin bearing the Ducati badge is evident on the Apollo.' 'At a time when there were no four-cylinder motorcycles of any type on the market, the Apollo would have established a standard of performance and rider comfort that, even a decade later, would set the benchmark for the Japanese. Truly, this was a bike ahead of its time,’ concludes Cathcart. 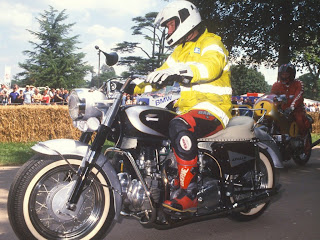 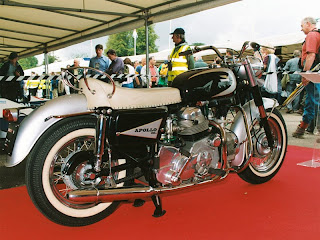 Those few who have ridden it says that “the four Dell'Orto carbs the Apollo wears (which indicate that this bike has the most powerful state of tune, not the restricted twin-carb spec) scorn the choke, but on a warm day the motor catches quickly, then settles down to a fast idle with an unmistakable cadence more akin to an American V-eight than an Italian four. The Apollo's exhaust note is totally unique, unlike any V-four Honda, and quite loud, too; the slender twin silencers don't have a lot of packing, and the result has the same trademark growl as a later desmo V-twin, only busier-sounding and higher-pitched. Once securely in gear, the Apollo thrusts forward eagerly with a long-legged feel, especially in the intermediate gears; there's great response from the light-action throttle, and frankly there's no way this engine feels like a child of the '60s. Top gear (fifth--at a time when practically all other bikes had only four-speed boxes) feels like overdrive and would have been ideal for freeway cruising. There's enough midrange to use the bottom four ratios as a means of getting into top gear and leaving it there, surfing the waves of torque available at almost any rev. Impressive. Compared with a British twin or any Harley ever made, the Apollo is a sewing machine to a concrete mixer in terms of vibration and riding comfort, with only a BMW Boxer of the era delivering anything close to the same smoothness. Even at a higher rpm the same unruffled, lazy-feeling response came to take for granted a decade later on any V-twin bearing the Ducati badge is evident on the Apollo." If it wasn’t focused on the police market, with its insistence on 16-inch rubber, and had instead conceived the Apollo as the world's first four-cylinder sportbike with tires and handling to match, even at the higher price the Italian V-four would have dictated, the U.S. market--and those in Europe wouldn't have had to wait another 10 years for Kawasaki to do the job properly with the arrival of the Z-1.