Letters for the NORTON 650SS 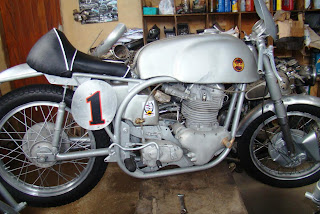 I had made a post of the bike you see here quite some ago. (Link to Original post). It was actually sent by one Mr. Pituco from Brazil who wanted to know thw origins of the Norton. Yes, the looks very well say that it is a mix up of Nortons, but he was not sure what went where and I wasn't either. I had requested for help if anyone knew anything or could put some light on the bike. I must admit I have never got so many mails in reply to a single post of my blog as this post got. One such mail was from Mr. Gary Parker who is the Canadian representative for the International Norton Owners Association, where he had detailed about the bike credentials. I also liked his justifications and put it on the blog. (Original Link). Recently I got 2 more mails commenting on the bike. As I am no Norton expert, I thought it would be best to just put the mails on the blog and I am also providing the emails so that you can put your queries through.
Email of Pituco, who wanted to know about the bike - pituco.com@uol.com.br
Email of Mr. Gary Parker - atlas65@shaw.ca
Email of Mr. Paul Wilson, whose post is attached below - pw2k@talktalk.net
Email of Mr. Joe Shmoe, whose mail is also attached below - sportspecial@hotmail.com
Mail by Paul Wilson

Hello,I was just looking at the pictures of the cafe racer, described as a 650ss project. I'm a lifelong fan of the featherbed framed Nortons and can give some information, based on what can be seen from those images.The rolling chassis appears to be Manx Norton. Definitely not 650ss. The Manx frames were made from Reynolds 531 tubing with brazed joints. The diameter of the curves to the upper rear frame tubes are Manx profile.

The forks, swinging arm, wheels and gearbox could well be Manx. I'm not sure about the front brake plate; but it does look like a nicely made item.The camshaft breather type is either Atlas, or early 750 Commando. The engine is most likely one or the other. Not 650ss. It looks as though there is a Manx type primary chain oiler, with the correct type of reservoir in the left-hand top frame tube. I didn't understand what you meant by: "....Commander crank-piston-air vents". but realised that you were referring to the cylinder fins (inclined on Commando; but horizontal on Domi/ Atlas). You can use different engine plates to achieve either with any Norton twin. The cylinder barrels look as though they are aluminium alloy; so may be another bonus with this project, assuming they are well made and in good shape inside. The Wal Phillips 'fuel injectors' are not bolt-on-and-ride-away accessories. They would take a long, long time to set up properly. Even then, they were designed for flat-out, short-track racing and would be a real problem to ride with for any more than 10 minutes!

Whoever made the saddle has never ridden a 'wideline' framed Norton! This could be a real good special; but will need a hefty wallet to finish it nicely.
Regards, Paul (Devon UK)

The front brake IS Manx. Not all year Manx bikes had primary chain oilers fed from the frame, some years fed them from the oil tank, so that is not a reliable method to throw out and say "that frame is a Manx or that is not a Manx", besides, anyone with any fabricating skill can add or delete frame features at will. ...if you look at the photos closely you can see that someone went over the whole bike with #1 a bead blaster, and #2 a spray-bomb of silver paint. Notice how the tach drive and many other alloy parts look "frosted", nothing on the bike has it's stock "as cast" finish. Notice how there are no nuts holding the cylinder barrel on, bolts holding the head on, no springs on the rear shocks, No tach cable, wiring or fuel lines or cables. Bits of silver overspray here and there. Contrasting this someone put a seat on with new
upholstery.
Yes there are a lot of Manx bits there, but they are beat ... and would need to be gone over by a real engineer. The cylinder is Dunstall, but Dunstall made 750 and 810 cylinders, so saying it is probably one or the other is more shit-talk. Also, Dunstall and the Norton factory, and other tuners put fittings and lines in the exact same location that the 750 Atlas breather fitting was to feed oil to needle bearing camshafts... I have been around Brit bikes ... do you want me to talk about having a featherbed Manx and at least one example of every model Norton dominator made since WWII?