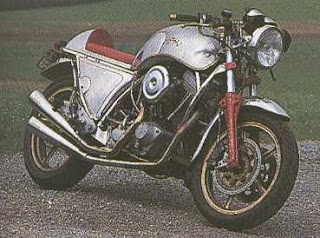 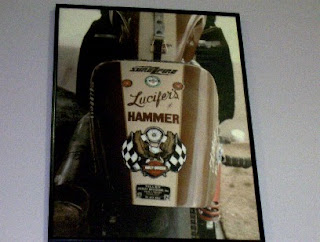 Thanks to Mr. Robert Conan from St. Louis who mailed to introcude me to a very rare Harley Davidson flat track racer. I have made posts of some ultra rare bikes like the NOVA, Apollo and the likes. From Mr. Conan, I got to know about another such rare bike from the Harley Davidson stable. I swear I have never even heard about it. A frantic search through my books, internet and phone calls to friends; I got some ray of hope as to knowing the bike. Oh! The bike, it’s called LUCIFER’s HAMMER. I searched for pics high and dry and landed up with only a few pics and very little information. Readers are welcome to add on and correct the information and of course will be greatly appreciated. So, the following info is whatever I gathered through books and the net. You must be familiar with HD racing, mainly the XR TT750 and the VR 1000. In similar lines, in the spring of 1983, Lucifer's Hammer was the first big twin for a decade to carry Harley-Davidson's famous black and orange racing strips. That year Jay Springsteen won the Battle of the Twins event in Daytona and the same year in October in Daytona again, Gene Church was victorious in the Battle of the Twins event finals. It all actually started one year ago in 1982 when Dave McClure rode a prototype XR1000 street bike at Daytona which indicated that HD is on to something special for the tracks, a full-on racer project. The team of Don Tilley (working on the engine), 4 times AMA champion for HD, Carroll Resweber (working on the chassis) and Peter Zylstra (overall design) lead by Dick O'Brien started together and they were also given the opportunity to see the machine as a test-bed and gauge the public reaction when HD plans to release the bike as a Roadster (XR1000) and it was also unveiled at the same Daytona meet. 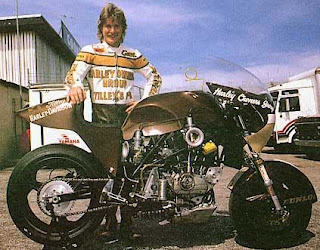 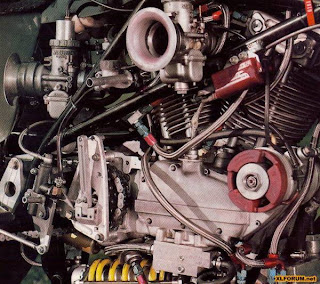 The engine consisted of a modified competition XR750 bottom end and light alloy heads mated to iron Sportster barrels. Twin 42mm smoothbore Mikuni carburettors took care of induction and for the 10.5:1 compression ratio, 110 octane aviation fuel was the choice. To improve combustion, each cylinder boasted twin spark plugs. In dyno tests, the engine was recorded belting out a monstrous 106bhp @ 7,500rpm, but Don working on the engine was not too sure whether the bike can hold all that due to reliability issues and so he imposed a rev ceiling of 7,000rpm, at which point the big twin was down… but by only 2 bhp, still pumping out 104bhp. The power delivery spread was also excellent with strong revs coming out from 4000 rpm onwards. All Don felt with so much power at such a small band, 4 gears are enough to take that all out and the gearbox proved to be more than adequate. The surprising part of the frame was that Carroll Resweber used a XR750 frame which was crashed by AMA champion Mark Brelsford at Daytona in 1972, fully ten years before the Hammer's 1983 win. Of course, the basic single spine and twin tube cradle was heavily reworked with extra gussets and bracing and it was mated to an all-new box-section swing-arm. The front suspensions were a pair of 40mm Forcelli Italia forks and twin Fox gas shock absorbers at the rear with Brembo brakes, twin 300mm floating-front disc brakes and single 250mm disc at the rear. The bike runs on 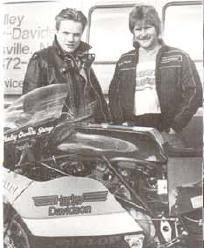 Campagnolo magnesium wheels, 16” front wheel and 18” rear, both shod with Goodyear racing tyres. It weighed at 130kg and the bike had a whooping top speed of 254kmph (158mph) and to think about it, it only had 4 gears! And a 10 year old frame! Wow!That was of course difficult to beat by any parameters and it shows! when it won in 1983 debuting in Daytona. After the successful debut, Gene Church and his Hammer won three AMA Battle of the Twins titles. The photo on the left is Gene with U2 drummer Larry in 1989.
Engine: 998cc. OHV, 4 stroke, V-twin
Transmission: 4-speed
Power: 104bhp
Weight: 130kg (2861bs)
Wheelbase: 1,420mm
Top speed: 254kph (158mph)
Actually that was not the only Lucifer’s Hammer. There was another Lucifer's Hammer and this was a Buell RR1000. You see the photo, that’s Gene Church with the Buell Lucifer’s Hammer and sans bodywork. The second Lucifer’s Hammer or LH2 was a marriage of an XR750 lower end with an XR1000 top end. The chassis was a Buell RR1000, the second RR1000 that Erik Buell made and Don Tilley still has it. What I couldn’t understand was that any company has to get 50 production versions of the bike to homologate it and then so how come there are only 2 LH? Somewhere I read #2 to #50 were all RR1000 but only the first bike was named Lucifer’s Hammer. As I said, not much history anywhere, so anyone with some more clarity would be really appreciated for their contribution. 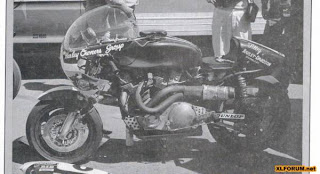 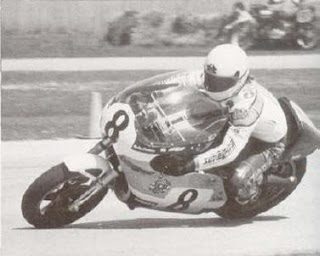 There is another version of the story which says that LH1 or the original was started when Harley saw the chance to compete once again at Daytona in the BOTT series. Springer raced a few times to a couple of victories and later it was given to Tilleyto work on it and he did a lot of good things to add power and also reliability and all this was done to break the dominance of Ducatis. In fact the Lucifer in one of the practice races even beat the VR 1000. Either way Don Tilley is the real story behind that bike. And the fact that the frame actuallt belonged to Mark Brelsford's TT bike is true. Mark's bike was called 'Goliath'.
And what's with the name? The name Lucifers Hammer, some says came from a legend, while some say it was named after a post apocalyptic novel with the same name. Okay, here are some other infos- The cylinders are made from XR750's, with a spacer on top and a LA sleeve pushed down through the whole set up. The spacers are made by one Mr. Duncan at Yankee Enginuity. Okay, now what was this BoTT? The AMA announced a series of races for two-cylinder bikes, the Battle of the Twins for 1983. And before that, in the early 80s, when Don Tilley started building race bikes for Gene Church was a promising young rider that worked in his shop. He had great success on racing the dirt track circuit and so the team decided to try road racing. It all started there and from 1983 to 1987, they simply ruled, in 1983 by Jay Springsteen and later by Gene. There is another story about another HD Race tracker by the name of Land Shark, but I guess it will have to be another post, of course if I can get some info on that, but for now take a look at what it looked like here which was a Mert Lawwill project. Most of the info I had gathered are from books I have and a brilliant XL Forum. The photo below here is that of the LH2. Any info on this post would be really apprciated. My email is at the bottom. 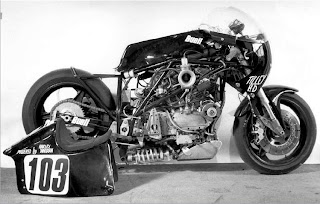 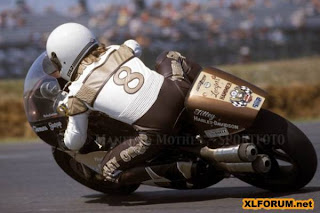