A Look at The CONFEDERATE Motorcycles

Founded in 1991 in Baton Rouge, Louisiana by Matt Chambers, Confederate Motorcycles has come a long way since Hurricane Katarina wrecked havoc in their New Orleans facility in August 2005. They have… as the saying goes… risen like a phoenix. Now having relocated to Birmingham (Alabama), post Katarina, they came up with the F131 HELLCAT.
Everything was lost in the floods, but luckily their machines escaped. Hellcat was in the last phase of R&D, so it was important to get it on road and thereby also announce that Confederate is alive and kicking. With a great show, it was launched at a price of $67,000. Well, if its too high a price, you could just deposit $15,000, fill a form and wait for your chance to get your hands on one of the Hellcats before stocks run out at 150 total. There was also a Hellcat variant, a.k.a Hellcat Combat with design specific hand ported and polished head design, ultra high compression, special camshaft grind, retuned intake system, which harmoniously result in a 12% gain in rear wheel horsepower and a 4% increase in rear wheel torque. 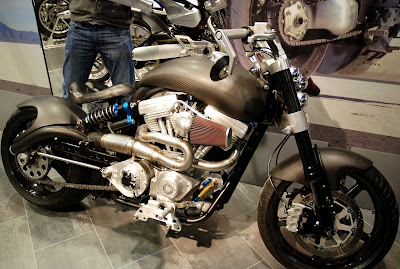 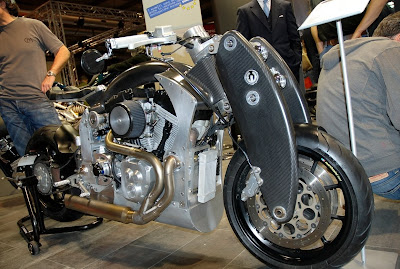 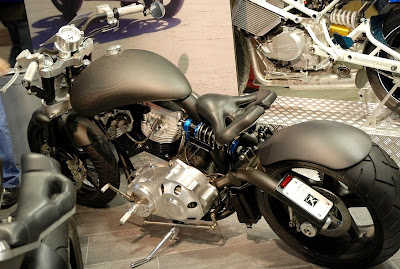 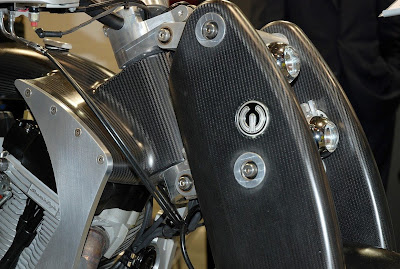 Why such a price? Well, if just not the look of it is enough to satisfy your answer, you can very well look at the specifications. Where else would you get innovative features like swingarm as an exhaust, saddle tank of carbon frame and oil tank moultes pieces cut into the body, luxurious components like Penske shock racing (50mm Marzocchi forks), both adjustable in all directions, rims in carbon fiber and so much of staff that you don’t get even in MVs and Benellis and anyway, these products are not for ordinary people like us.

In 18 years, Matt Chambers has made of Confederate and has taken it to the top of the world. I would rather call them a company, well yes it is, but I mean instead of putting them the ‘custom builder’ tag. With what we generally familiarize custom builders are building bikes on existing engines like OCC or even Goldammer, the king of custom bikes and even high high profile designers like Lazareth. Where as Confederate makes the entire bike, from the engine to the chassis and the finish, its just that production is very limited, only 100 odd or even less. The other company which comes to mind with the same credentials and probably equal repute is Ecosse. 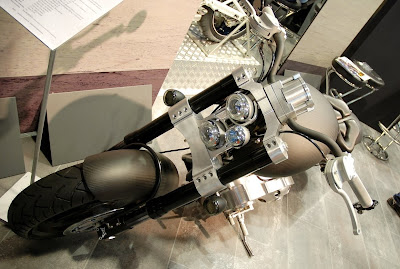 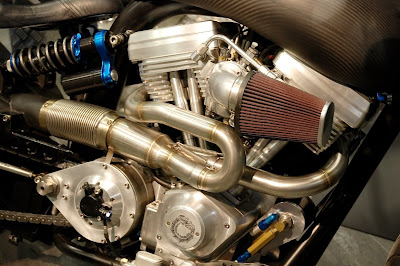 Confederate motorcycles have kind of become a celebrity show, you know Hollywood biggies have to have then and then they are featured in major Hollywood movies. The looks are so unconventional, yet there is probably no bike which draws so much awe, it’s like the 21st century Vincent, everything is perfect, from the engine, looks to performance, you won’t be left wanting or probably the only thing you would want is a little privacy once you are riding a Confederate. Look at the materials used, carbon, aluminum, titanium, all goes to make these high tech bikes very light. The chassis is made of carbon, the swingarm is made of aluminum, the forks are a combination of all three to give that lightness and extra rigidity.
The beauty is not sublime, it doesn’t want to be, it’s more of in-your-face and it will strike you everytime.
When the first Hellcat was launched, there were plans to make 250 of them and by the time they were officially launched, the number came down to 248. Well, by that time Nicolas Cage and Tom Cruise have already lightened their wallets. Matt Chambers clearly speaks his mind and his ideas are based on what Confederate slogan is… "The Art of Rebellion."

Then came the Wraith B120 and they released 45 C120 Renaissance Fighters last year. The Fighter’s chassis is made of aluminum and titanium and as mentioned production is limited to 45 only. But like all, for me it’s the Wraith which gets my adrenaline rushing, the ultimate show piece of machinery in 2 wheels. Its ‘conceived as a counterpoint to the golden era of 1930s’ it is luckily still in production and should you be able to buy it, and if you love motorcycles or anything that moves, this is just the absolute piece of jewellery you must have. Being a lifestyle bike, it has more power than you will need at 125 bhp and all those horses are for a mere 177kg machine.The F131 Hellcat Combat is heavier at 222 kgs and they are still available on demand. Of course, these bikes take time to sell, but for sure it has his takers. 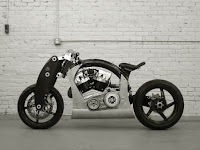 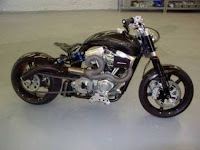 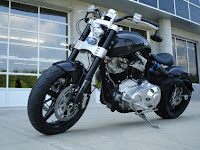 Their ambitious project Renovatio is on the pipeline and this was actually the model they wanted to start with. The preliminary specifications read a 1700cc 90 degree V-Twin engine at the heart of the Renovatio which will eventually pump out around 135 bhp and 125 pounds of torque. Of course prices are not set, so so is the final design. If you look at the images at the link provided, the seat has 2 designs, one as an engine extension and the second as a tank extention.
For all the Confederate models, overall, the objective cannot be any simpler. Just mount the engine on two wheels, just a framework, that’s it. Nothing more. You know when you haer a building with lots of room and lots of bed, it can mean either a hospital or a hotel. Likewise, a machine on 2 wheels for Confederate is like a 7 star super deluxe hotel.