Taking a Closer Look at the S1000RR

BMW is known for many things. Reliability & Value for Money being some of its characters. Ofcourse even in terms of performance they have been never found wanting and they are legendary in their touring capabilities. What they are not associated with is the MotoGP circuit and the tag of Superbikes because that tag is more or less limited to road versions of MotoGP bikes. But now all these has changed. With the launch of the S1000RR, BMW has got that tag and of course also made their debut in MotoGP. And although they are yet to make a mark in the MotoGP till now, it’s not about the relative success that is eluding them, but it’s about this new direction that BMW has taken. The expected goals are to garner top-10 results in ’09, then to log podium positions in 2010. The S1000RR has been very competitively priced to fight the Japanese market which means it’s not fighting against the European market ruled by Ducatis and Aprilias. Hendrik von Kuenheim, the General Director of BMW’s motorcycle division has long term goals for BMW Motorrad and is looking at a long-term involvement in this segment as he is confident of setting new benchmarks.
This inline-four engine offers the best qualities to meet the power, performance, weight, and package requirements to be fulfilled and has the power to belt out 190 crankshaft horsepower. The frame is a conventional aluminum perimeter layout with a banana-style swingarm working a single shock out back. The S1000RR will offer traction control a feature which is not found in any Japanese bikes. Other features are throttle-by-wire actuation and variable-length intake snorkels. 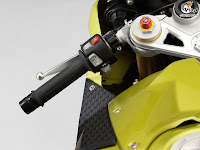 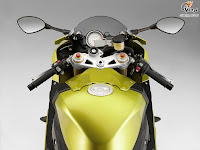 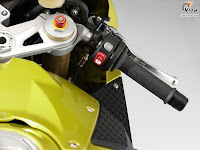 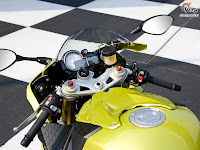 BMW has officially launched the S1000RRs month. This GP bike has been built in partnership with Alpha-Racing, a German tuning shop with plenty of motorsport experience. BMW Motorrad sales projection is an increase by approximately 50% by the year 2012 to 150,000 units which means that they are specifically entering market segments where BMW Motorrad was not represented so far.
193 horsepower at 13,000 rpm is saying a lot coming from a SBK weighing only 183 kg. And mind you, this one was the most anticipated motorcycles of the year. It is fully loaded with Dynamic Traction Control (DTC) and race-ready ABS along with Formula 1-inspired valve actuation. That’s an absolute tour-de-force in terms of its power-to-weight ratio and performance also. The cylinder bore of 80mm and stroke measuring 49.7mm with a short stroke/bore ratio of 0.621 gives an outstanding high-output power. And with its compression ratio of 13:1, the power unit of the S 1000 RR comes right at the top in terms of production engines, offering an ideal combustion process for optimum power yield and maximum efficiency.
Safety also, seems to be of paramount importance. There are various set-ups at the touch of a button like ‘Rain’ for wet roads ‘Sport’ for regular road, ‘Race’ for race track with supersport tires and ‘Slick’ for racetrack with slick tyres. And for a balance standard of performance and safety, you have race ABS and Dynamic Traction Control are combined with the respective riding modes and coordinated with one another. The riding mode last chosen is always retained when you restart the motorcycle. Like riding on a wet surface meaning reduced grip, if you put on the ‘Rain’ mode, it automatically reduces maximum output to 150 hp. This mode also provides a particularly homogenous power and torque curve, with engine response and power build-up by the engine being extra-smooth and soft and so when riding on a dry surface the Sport Mode provides full engine output of 193 hp. The Slick mode is intended exclusively for racing on the track using slick tires and contrary to the Race mode, the Slick mode allows Dynamic Traction Control to cut in permanently only from a side angle of 200 which allows the rider to wheelie for up to five seconds when leaning over to an angle of less than 200 while ensuring optimum acceleration and pulling force when accelerating out of a bend. 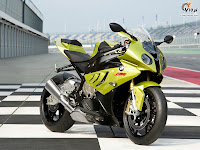 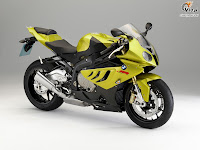 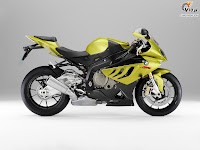 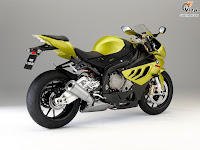 The whole bike is new. There is nothing from the other BMW series. The water-cooled four-cylinder inline power unit chosen to provide these qualities is brand-new from the ground up revving up to a maximum speed of 14,200 rpm. Maximum torque of 112 Nm comes at 9,750 rpm. Taking a cue from BMW ’s Formula 1 engines, there are two intake and exhaust valves per cylinder made of extra-light titanium are operated by very small and equally light single cam followers. In conjunction with the short sprocket driving the camshaft via an intermediate gear, this ensures supreme revving qualities at the highest speeds as well as exact maintenance of valve timing combined with very compact dimensions.
It is also the lightest machine in the litre class category. One of the features that ensures this light weight is the aluminum bridge frame integrating the engine tilted to the front at an angle of 32° as a loadbearing element for optimum torsional stiffness on minimum weight. The front wheel runs on an upside-down fork with a fixed tube measuring an ample 46mm or 1.81" in diameter. The spring and damping action required is provided by a central spring strut pivoting on a guide lever. The rear frame section of the S 1000 RR is a welded light-alloy structure belted to the mainframe, combining low weight with superior stability and a high standard of robust strength. The rider’s seating position is typically race inherited, i.e. leaning forward. BMW has also paid a lot of focus for superior ergonomics in a manner suitable for all sizes of riders.
There is also the ‘anti-hopping wet clutch’ with a total of ten friction plates of diameter 132.4 mm helps meet all the requirements of supersports riding. 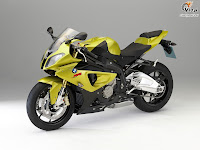 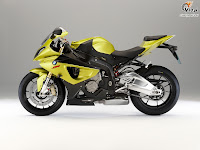 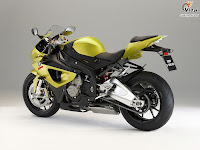 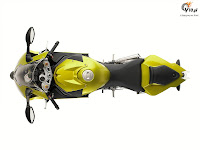 Tyre dimensions are 120/70 ZR 17 at the front and 190/55 ZR 17 at the rear, the front wheel comes with a double disc brake incorporating two steel brake discs in floating arrangement and measuring 320mm in diameter. The braking power of the engine in overrun is transmitted to the rear wheel by the clutch only in part, that is only to a limited extent. When braking hard and shifting down at the same time, this prevents the rear wheel suddenly running under much less load due to the dynamic distribution of wheel loads from abruptly locking and juddering, keeping the motorcycle smooth, stable, and easy to handle also when applying the brakes.
For that free-flow performance, the gearbox and transmission system have been kept compact and short as possible with the primary and secondary shafts positioned on top of one another, thus saving a lot of space which also reduces the overall length of the engine and allows the use of a long rear-wheel swing arm for better traction. Fuel is injected individually in accordance with the intake stroke of the respective cylinder into the intake duct and the S 1000 RR comes with highly elaborate intake manifolds varying in length which improves the torque curve and depending on engine speed an adjuster motor is fitted on the airbox that varies the length of the intake manifolds through map control in two stages. In terms of design, BMW was never a benchmark, but this time, they have also focused on the overall look but has all the BMW traits like asymmetries twin headlamps used intentionally in the design of the machine the so-called Split Face, are design features characteristic of BMW Motorrad now featuring on the new S 1000 RR. 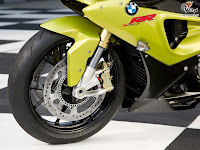 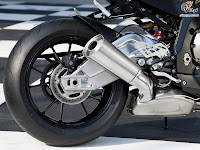 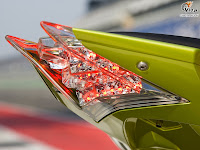 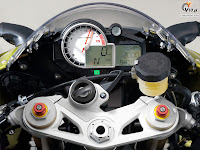 The slender fairing giving the S 1000 RR an extremely sporting appearance and accentuates the overall design of the machine with its short and low front end, the high and compact rear. The low-slung front fairing, the high-rising muscular rear with the tweaking look through the headlamps gives it a very aggressive yet smooth image. It’s slender, dynamic proportions beholds the supersports image.
BMW has also wisely focused on the overall aerodynamics. To start off look at the large centre air intake clearly demonstrating that on this machine the wind rushing by is converted into additional performance. Even the overall dimensions of the machine and specific parameters such as length, width, and height, it has been made in such a way that the rider will be a part of the total packet. BMW has no done something very extra ordinary, but like a typical German firm, has executed a machine without any compromises that can take on the best head on.
On the GP front, let’s wait and see how they fare this year and if they will be able to live to their expectations, but on the consumer front, this seems to be a bike which will give the rider happiness for every ounce of hardwork that he or she did to garner that well spent money on this machine. The “S” in S1000RR stands for Supersports, and rumours are that they might get a 675 cc engine too in this category in the near future. 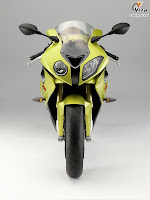 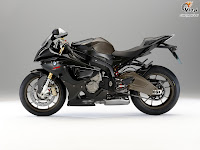 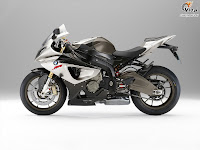 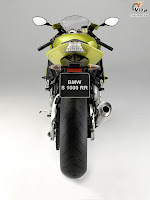