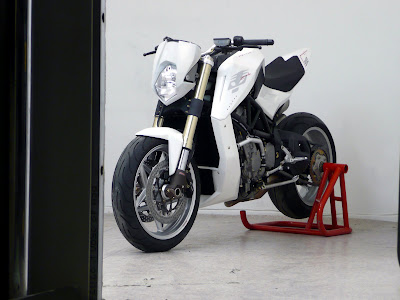 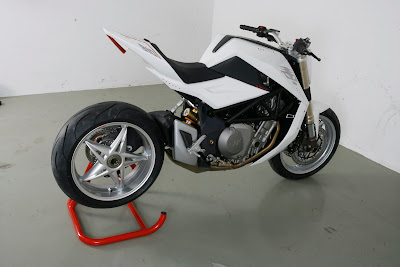 How can you make a very good looking thing even more good looking? Well, thats easy, just design it, right. Now if a certain thing is considered to be a benchmark of its class in terms of beauty, how do you make it look even better? Umm... maybe you give it to a ... French designer, after all the French are known for their style, right. But do you think that an object universally considered as the most defining beauty of its class that is designed by a legendary designer can be done anything better or will it take the sheen off?
Yacouba Galle has set his project on a similar lines and tried to justify his work. The project here is beautifying the MV Agusta Brutale. Now hold on, dont just jump to your conclusions that it is oure sacrilage to even think of doing something to a enigmatic beauty of the class of Brutale. I too agree with all others that the Brutale is the most beautiful naked roadster ever built and who is to question that, after all it has been designed by Tamburini. Yacouba also very much shares the same feeling and what he has tried here is actually pay tribute to the greatest bike designer of our times. He doesn't even try to outdo it, but its a pure homage to the designer.

So who is this Yacouba Galle guy? Well, he is a French artist, not a premier bike designer and he actually is a designer per se, meaning he will design everything and he does, from a brillaint Brutale to your luxury yatch and even your home and his work exudes elegance only as the French can. Born in 1978 in Niamey (Niger Republic), he choose France as his homeland in 1990 and turned pro in 1998 when his illustrations were featured in Moto & Motards magazine. And there has been no looking back since after he joined the same mag's edotorial team in 2000. By 2004 he had his own brand of clothes and by 2007 he designed his masterpiece, the Bestiale.
So what he does here is take the $18,000 bike and give it clothes to wear which can be bought over the counter for $7,770. Dressing up the sexiest looking motorcycle is no mean feat at all, but Yacouba has tried. This powersports enthusiast worked up the Brutale in 2007 and lets see what he finally got. First and formost the most basic thing... he got it right. he didn't try to mould the Brutale in any way. What he offers is a bolt-on kit for Brutale owners meaning it can be taken off just like that and the original Brutale can be restored instantly. But its easier said than done, right. I mean, an add-on kit that completly gives the Brutale a new look is something most of us cant even percieve in our minds and thoughts. It was not easy for Yacouba also. It took him alost a year to get that perfect look and now its available for any Brutale owner.

This kit is applicable to the entire Brutale series of 750, 910 and 1078.
Yacouba has named the kit as Bestial which means brutal. So what is in that kit that cost more than a 600cc bike? Well, the Bestial kit consists of eight different elements. The front mudguard made in fibre, the headlight along with the entire case made in fibre and this is computer generated, the long hoof or fairing also made of fibre, the fibre tank with a capacity of 15 litres, the seat, the rear hull with integrated LED tail lights, an aluminum bracket to support the registration plate and tubular steel cradle. It is ofcourse limited to 20 for production as initially planned but later on raised to 50 for excessive demands and comes only in pearl white colour.
It was first presented in Paris Motorshow in 2007 by Yacouba Galle and his business partner Laurent Dupas to gauge the public reaction and of course as expected after recieving an overwhelming positive response, the kit was made available in 2008. 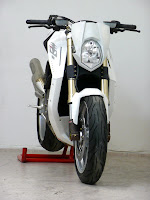 The best thing for Brutale lovers is that he hasn't even touched the engine which means performance from this monster can be expected as per the original model. All he has done is make eight changes as mnetioned, And how this changes have affected the bike? Well, I wouldn't have even believed that this is the Brutale even if you have told me so. It looks similar to a KTM, but you can make out that it is not. the only thing that gives away are the exhausts and the star alloys. When you think of the Brutale, the defining images are its naked body, the beautiful headlamp and of course many other things, but what Yacouba has done is covere up these things to give it a totally new look. Of course he never wanted to take the focus away from the Brutale and it wouldn't have been wise move either, after all if you are riding a Brutale, you want people to know that you are riding a Brutale, so Yacouba has the left the engine exposed too. So what you get is an original Brutale, but with more aggresive looks with those angular cytting designs. This is a rocking roadster with loads of attitude and aggresive written all over it and it has ben justified with its name - Bestiale, a Brutal aggresive beast. Now tell me, what do you think about the Bestaile? Yacouba maynot have outdone Tamburini,and he never intends to in the first place, but he has done the unthinkable. He has given the Brutale a whole new look and this kit by no way takes away anything from the beautiful Brutale. Visit Yacouba on his website to see his creations and there is a altogether individual link for the Bestiale.