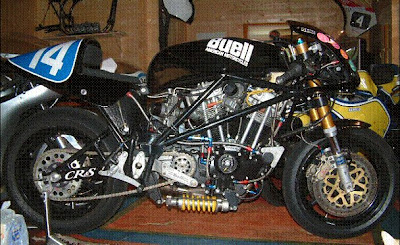 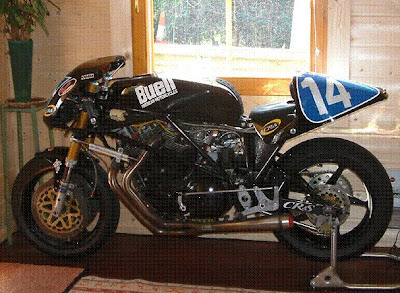 Regarding Homologation query raised in a previous post: In the mid 80's to achieve AMA homologation a manufacturer had to present a bike largely complete and meeting existing regulations, in this case to the AMA and demonstrate financial and manufacturing ability to build another 50 machines. However the AMA might have allowed a little latitude to an American manufacturer using Harley Davidson engines to take on the might of Europeans manufactures in BOT racing!

A little history: In the early mid 80's European manufactures had successfully argued that the CC limited should be raised from 750cc to 1000cc thus allowing Ducati, Moto Guzzi and others to race their bikes competitively, however this made Lucifer 1 (750cc) too slow to be a front runner against bigger capacity of the European works bikes. Lucifer 1 need to grow a little therefore, the engine was enlarged mating (as you state) XR750 bottom end with XR1000 top. The extra power produced demanded a better chassis and Erik Buell was asked to build the chassis which later became known as the RR1000. The bike was developed / raced showing great promise and made some "what might have been" headlines but ultimately failed to win a major in the USA. Alas Gene Church got hurt racing LH2 and ultimately retired from racing and Don Tilley's interest in the project waned. When manufactures successfully argued a reduction in the engine capacity limit from 1000cc to a new limit of 900cc the Buell / XR750-XR1000 was effectively outlawed and ended BOT racing and Buell Lucifer 2 story. There was some thought of reducing the capacity of the Buell framed bike to maintain eligibility but I don't believe this happened. The final variant of Lucifer 2 using the same configuration XR750/1000cc engine but in a XRTT chassis was not to my knowledge raced in BOT due to the CC limit but was successful in other classes (possibly BEARS). 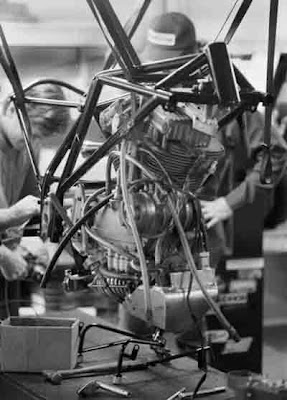 I have a great interest in the Lucifer 2 Buell story or rather the bikes whereabouts. Let me explain.
Some years ago I bought an early Buell, the chassis is an RR1000 and has 02/86 forming part of a short chassis number; Note all of the production RR1000 carry a full VIN number but mine does not. Erik described this chassis in correspondence (c1991) as one of two lightweight chassis he built for his own race efforts in 1986. These two chassis predate the RR1000 road bikes and from a variety of sources I have been told that RR1000 chassis 2 went to Don Tilley and became Lucifer 2.
My chassis 02/86 including swing arm, front fairing sub-frame, engine mountings castings, isolastics and tie bars, Ohlins rear shock, breather / separator, seat and a complete race prepared XR1000 engine, primary, gearbox and exhaust came from Erik Buell in 1991/2; basically a bike less forks, brakes and wheels. The bike pictured was completed in 1993 and competed in the Italian round of the Battle of the Twins championship. I purchased the bike from builder / owner in 2004.
Several years after purchasing the bike and in an attempted to locate period race parts and advice I sent an email to Don Tilley. In a response from Tilley Harley Davidson; Don asked another to respond on his behalf they stated that their Buell project only lasted a couple of years and that they had "nothing left" and suggested I speak with Henry Duga of Buell. What exactly Don's statement "nothing left" means I don't know but it does sounds like he doesn't have the Lucifer 2 Buell variant or at least the chassis. I do know that the second incarnation of Lucifer 2 (XRTT framed version) does exist and Don's workshops reassembled this bike quite recently using the original engine (I am advised). If this is the case then rationally the existence of Lucifer 2 Buell variant is not possible as the engine can only ever be in one chassis and very recently Lucifer 2 using the XRTT frame was being paraded at the race meetings in the USA.
On the evidence I have; my early Buell chassis 02/86, correspondence supplied when I purchased the bike, emails, some rational and educated guessing I think I might have Lucifer 2 Buell chassis but I can't be sure. I do know that my chassis is one of 2 preproduction bikes and the debate surrounds the interpretation of the chassis number; either 02/86 refers to backup or race chassis 2 or 02/86 refers to the second chassis To be produced. In my limited knowledge the 1st chassis made is always stamped 1 and so forth.
Some time back I was sent some photographs of an RR1000 chassis under construction with a modified xr750 fitted and the low oil tank (road RR1000 had their oil tank under the seat). Henry Duga has confirmed that these photographs are of Lucifer 2. Using the head stock length and diameter and also known engine dimensions as data points I scaled off frame dimensions and tube positions and compared them to my chassis: The dimensions are the same. Also comparing later photographs of the completed Lucifer 2 and comparing bracket positions e.g. coil and fairing sub-frame again proved to be the same.
I have been in correspondence with the Buell factory in an attempt to establish which bike I have but Henry Duga advises no records exist of non VIN bikes so establishing which chassis went where is difficult therefore but I am sure there is someone out there who could shed a little more light on this subject.
My bike is currently being rebuilt, the engine is overhauled and the black paint removed, the manifolds and inlet ports are being reworked. A Motoplat ignition is being sourced, new under sump oil tank and fuel tank are being manufactured, I have Dymag wheels, correct forks and AP brakes. I have also fitted and XRTT fairing which has been trimmed and now fits great and looks superb. I just need to decide on the colour scheme. Any suggestions?
Dear Steve,
Best of Luck on your project and if it is not possible to create LH2 without Don, we are very sure with your dedication and passion, we can expect Lucifer's Hammer 3, the Steve Ledsham creation very soon. All the best. And yes, can we have more photos? Please?
Also requesting any reader if they could anyway help Steve. You can reach him by email at lledlaw@aol.com or you just might want to write to him to know more about the project.