The BEAST from Target Designs 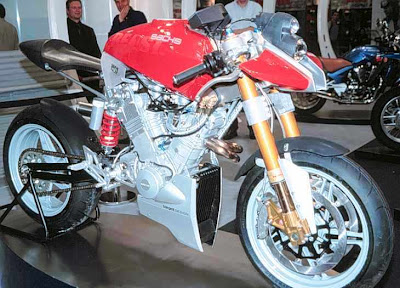 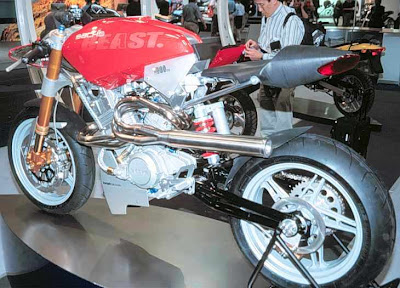 This is the BEAST 1000 from Target Design. This German styling firm has a simple concept of bikes with the bare minimum, no frills and accessories, just the minimum essentials and with this kind of a vision, it is one thing that it is difficult to make a designer bike but to make a designer bike that stands out is really wishing for the stars. But Target Design is good at getting the stars! The Beast 1000 is short, is a 100bhp bike weighing 145 kilograms! Beat that! No doubt, this is a radical motorcycle concept with the motto of the firm to keep to the essentials while giving out the maximum driving pleasure. With this kind of weight for power figures, it is a ‘quantum leap in motorcycle development’. The Beast made its debut in Intermot 2000. It looks like a muscle bound mayhem wrestler who had just gone further on a weight loss programme.

The machinary, engine and ergonomics have been greatly detailed. There are some great innovations that have gone in designing the Beast. The peculiarities of the Beast for example, consist in the fact that the cooling air is transported inside the aluminum box frame, the cooler can therefore be moved from the front end to a rear area, and then no longer acts as a disturbing porch. The Beast 1000 cc rides on a V2 with a cylinder angle of 60°. It also has a compressor version, which the firm says has a much higher performance than the base engine. The weight of the complete engine was visualized to be less than 50 kilograms which would be cutting of almost 50% of weight for similar engines. Usually only SBK engine weigh this much as they are made of ultra-lightweight components and so as expected are correspondingly expensive. To continue the purpose of designing a light weight bike, the box had a monocoque frame and the wheels made with magnesium. There is no conventional steering head, the two camps are located respectively above and below the frame and it allows for a fully open air inlet. The central aluminum box frame is cooler and internally has separated air box, a fan in the rear frame providing adequate ventilation at standstill.

The prototype/ concept model at the Munich exhibition consists of an aluminum frame, the plastic parts are made from GFK (Glass Fiber Komposit - GFK is a plastic reinforced with Fibre Glass, it uses plastic resin). Xenon lights provide the illumination, and miniature wings for aerodynamic efficiency.
Target Design made a name for themselves in the motorcycling world when they designed the futuristic Katana for Suzuki as early as 1980 and then again in 1990 with the BMW R100 GS Paris Dakar, they created a new motorcycle category. Besides bikes, they are into a lot of other things, both automotive and non automotive. They have shared a long standing partnership with Sachs motorcycles and I am sure you remember the MADASS 500 that they designed for Sach, based on the Royal Enfield 500 that made as a concept in Intermot 2004. It was “a motorcycle without plastic” according to Target Design. It had a tremendous response and it becomes a new cult! And before the Madass and the Beast, there was the BigRoadster V3.8 which debuted at the Intermot 1998.
Target Designs are having talks with smaller similar motorcycle firms like Sach to take the BEAST 1000 from its concept to production.