So much has been happening in the motorcycle world recently that it is difficult to keep pace with the new things. Just wanted to put some new 'things' that got attention of the world in the past one and half weeks. I am sure you must have caught the info and news, but in case you haven't, links are provided of the original source for full stories. 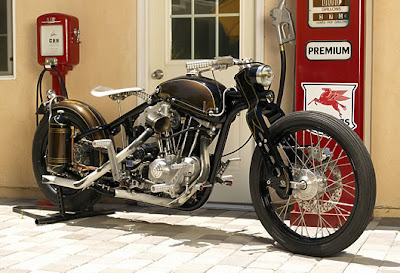 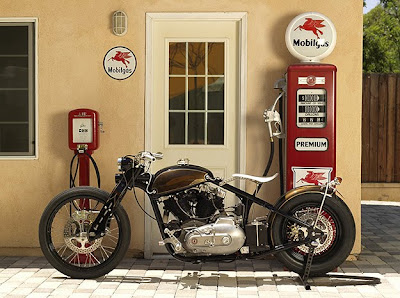 After the recent AMD mind blowing beauties, here is another one which should have easily gone to the AMD. It's so beautiful, it is almost unreal and of course credit goes to photgrapher Jim Gianatsis of Fast Dates for depicting the beautiful handcrafted bike in such fine visual delight. OH! the bike... Yes, this is #6 (that's the name of the bike) from Seattle-based Chris Flechtner. And his approach got a big tick from the judges at last month’s Calendar Bike Building Championship in Long Beach as it walked off with the Pro Builder trophy. The bike was three years in the making at Speed Shop Design, and uses many hand-crafted parts. Sitting in the custom frame is a 1978 Sportster motor—a 38mm Mikuni VM carb supplies the gas, and air arrives through a modified horn scoop from a 1936 Ford. The front suspension, an 18” internal springer, is a Flechtner one-off. Chris Flechtner is a builder, has been for quite some time, starting out with RC model cars, then hand built bicycle frames and then a custom from a Honda CB350. The tank is a heavily modified Yamaha RD200 unit. He kept building while earning his MFA in design and metal arts from Cranbrook Academy of Art. Then he apprenticed under one of Japan’s most accomplished sword polishers and restorers, Tatsuhiko Konno, where he is still involved in the restoration of priceless samurai swords and armor. It’s not the usual path to custom motorcycle building but it lays a great foundation. Visit SPEED SHOP DESIGN although currently, it is inactive but has a flickr link for more photos. But you can also vist Chris Blog.
Source: BIKE EXIF & Knee Slider. 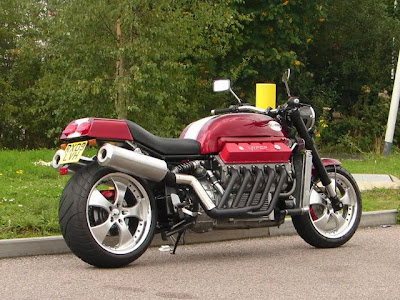 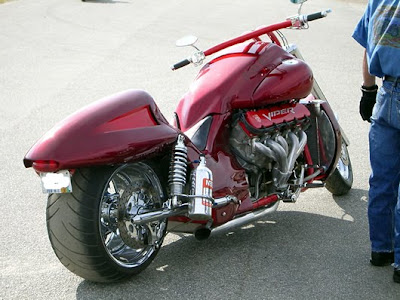 Brit bike builder Allen Millyard has launched his biggest and best machine yet - a 500bhp monster powered by a V10 Dodge Viper supercar engine. This is a street-legal motorcycle that’s powered by an 8,400cc motor. The V10 really needs no special tuning to get that output so all you have to do is fit the engine into a frame, Millyard has built a lot of interesting customs over the years, like a V12 Kawasaki from two 1300cc straight sixes, among others. Source: Faster and Faster through MCN.
Well that was the first one. Though not as massive as the Millyard motorcycle, the second one is a Arizona Boss Hoss Viper V10. It was posted in Kneeslider and one of the reader, Nawitus sends the link of the official source of this Arizona Boss Hoss. Apparently, these guys sale a lot of monster bikes and trikes. It’s really amazing how different the two bikes look while using the same powerplant. Visit the Arizona Boss Hoss websit to have a look at their lineup. including a 6000cc, 425 hp freaking liquid cooled V8, made from a Chevy, the 57 Chevy Trike. Sweet! 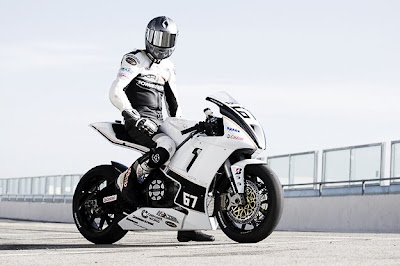 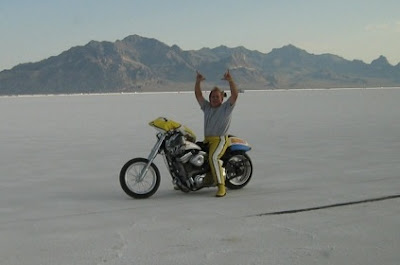 There is a new Superbike firm in the news and this is something similar ro the HD Roehr firm. Meant only for racing, very very costly as expected and what stunner to look at. A Superbike has hardly looked this good before. The stylish machine is the AV1 from Kalex Engineering. This is a limited production track weapon with space-age chassis engineering—and the Rotax V990R motor from an Aprilia RSV bored out to 1100 cc. Described by Performance Bike magazine as 'The best bike since the Britten', it was created by Alex Baumgärtel and Klaus Hirsekorn for trackday enthusiasts and riders in the European ‘Sound of Thunder’ race series. The AV1 is about to be joined by the Kalex Moto2, which is on a drawing board right now in Bobingen, Germany. It’s being developed for the Moto2 race category, which uses modified 150 bhp Honda CBR600RR engines and will replace the 250cc class in 2010. Source of info: BIKE EXIF and you can visit Kalex Engineering for more details. Pssst! They are also working on a customized Triumph.
And here it is. The fastest bike in the world. this is a V-Quad engine from Nelson Engineering. V-Quad sets new world record at the Bonneville Salt Flats then breaks that record too! The final record speed is now 164.172 mph. Mike Maggio rode his V-Quad bike to the new record on Wednesday 8/12/09. The V-Quad engine, basically a side by side V-Twin, that Greg Nelson produces, was installed in a custom motorcycle built by Brouhard Design for owner Mike Maggio. They took it to Bonneville recently and Maggio ran 164.172 mph for a new record in the APGU class. This is an open motorcycle (no fairings or streamlining), push rod, gas, unlimited engine size above 3,000 cc’s. This is the production V-Quad engine you can buy. Greg says they’re already working on an upgrade with plans for 180 mph in October at El Mirage. Mike Maggio's twin turbo V-Quad is on the cover of September's issue of America Cycle magazine. Check out the V-Quad website for lots of interesting stuff and all the details of the Carl Brouhard built award winning custom and there is also a video of the bike on the Salts.
Source: The Knee Slider