Feel the 80s with HESKETH Motorcycles 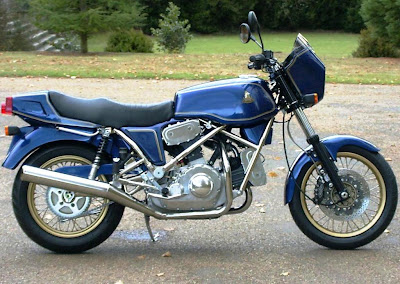 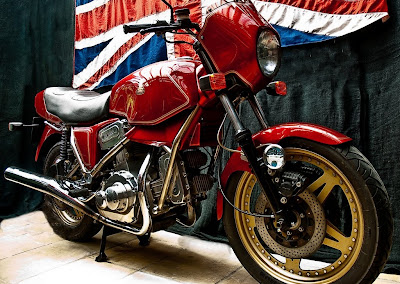 Picture of 'red' Hesketh - Johnny Doome Flickr
Are you a bike lover of the 80s styling? Would you buy a bike which has 80s styling, is from the 80s and still produced, yes brand new 80s styling bike! Well for a premium, you can get one, thanks to Hesketh Motorcycles. Never heard of it?
Well, probably because only around 200 have been built so far since 1982. But don't worry, you see the beautiful blue bike above in the 80s styling, you can have that. It has '0' kms on the odo and it is factory produced.
So what is with Hesketh motorcycles? Lord Hesketh of Great Britain hit on the idea to build a bike as the British motorcycle industry was falling in the early 80s. James hunt was the rider when a private firm won the Formula One Grand Prix for the last time. Built on his skill and experience, Lord Hesketh had a prototype running loosely based on the Vincent. It was the Hesketh V-Twin V1000 and it was the first brit motorcycle with four valves per cylinder and twin overhead camshafts. It was styled by John Mockett who later went on to design the Triumph Rocket III. The bike was air cooled. After 2 years in the making and not able to find partners, Lord hesketh launched Hesketh Motorcycles. However, there were problems like the bikes were heavy and not really reliable. There was overheating due to the lack of air flow. The press ripped it apart and after the 139th model, it was stopped. 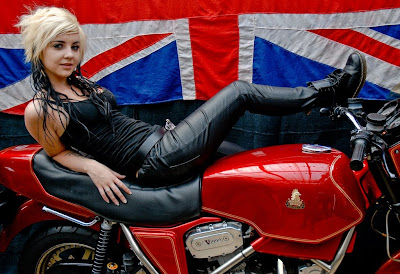 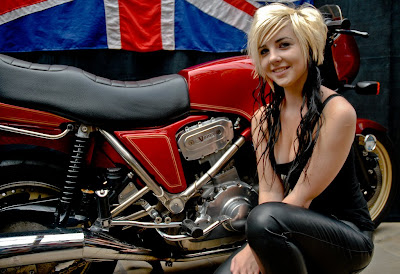 Above pictures source - Johnny Doome Flickr
Again in 1983 Lord Hesketh formed a new company with Mike Broom, Hesleydon Ltd to manufacture a revamped V1000 with a full fairing, called the Vampire. This was with better airflow to keep the engines cool. The fairing was again designed by John Mockett. But other than that, it carried all the faults of the V1000. Only 40 or 50 were produced before the company closed again in 1984. Now Mike Broom was a long time associate of Lord Hesketh and in 1984, Hesketh sold his company to Mike and he formed the Broom Development Engineering. It is still producing the Hesketh motorcycles, all of them hand made and as such on an average only 1 per month. That is also the demand generated. The Hesketh V1000's uses a Reynolds tubed frame, which lets the motor hang from its swingarm pivot and front downtubes. This was indeed a clever piece of engineering and even in the new models from 2004 onwards the bikes get fully adjustable suspension front and rear and yes, new alloy rimmed spoked wheels too.
There is a V1000 EN10 which is actually a V1000, but with oil cooling improvements developed by Broom engineering, mostly including oil radiator to cool rearward cylinder. Mike Broom has made around 60 machines since he took over. Then, there was the Vulcan, a V1000 EN10 with a series of modifications including a bored out 1200cc engine. 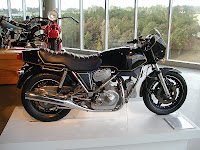 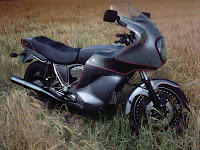 The V-1000, VORTAN & VAMPIRE
Now as mentioned, Mike is delivering these hand made motorcycles in the form of the Vortan. The Vortan is a bored out 1100cc, sports version of the V1000 with highly modified chassis. But till now, only one has been made and it is for sale for an astronomical £20,000 (USD 33,000). The Vorton has been made as a mark of respect to Lord Hesketh 20 years after the first V1000. Evolved from the Hesketh V1000 it retains some of the better qualities of the earlier British motorcycles with more modern material and design. the engine is the same, bored out with a longer stroke, steel crank, different ignition, cams and cylinder heads. The chassis is completely new to give better performance with lighter components and steering. You can see that the styling has moved from the 80s to new European designs. But if you want a pure 80s style, well you can still have a V1000 for £14000 ($23k), a Vampire for £15000 ($ 25k), a Vulcan for £17000 ($28k) or this Vortan that you see here for £20,000 ($33k). 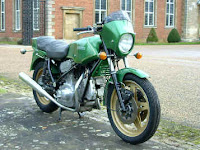 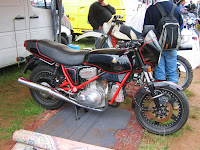 The first photo you see of the blue bike is actually a 2006 model of the Hesketh Vulcan. The bike has been vastly upgraded by Mike Broom and the chasis has been beefed up. Thisis the new range for the model and major developments include increasing capacity upto 1200cc to increase torque, the oil management system has been reworked to increase engine longevity. The new overhead valves have improved cams to reduce noise and increase efficiency with unleaded fuels. A digital computer ignition system has been installed, the gear problems have been looked at with the introduction of two-dog gears to provide quicker gear changes. As mentioned, the new chassis has adjustable front and rear suspension along with new spoked wheels with alloy rims. The styling is retained in those classic lines. This is not a modern machine by a long shot and even Mike says that the bike is not built for speed. There is no justification for the price, but you can get a custom made bike with a little bit of history and so there is a place somewhere where you can throw your money!
There is also the only Hesketh Club which can help you with a new bike and also check the Gallery of the club. 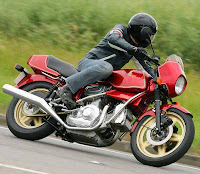 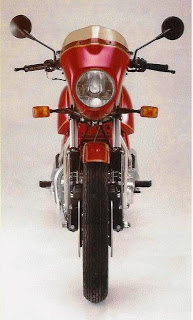