Another GUZZI 'Diamente' from Barbacane 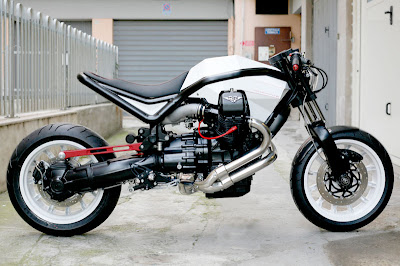 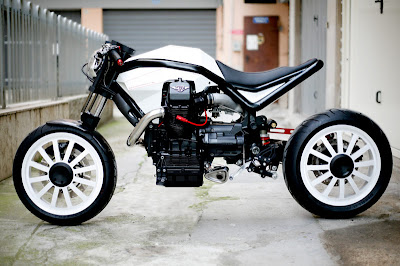 At the first look, it reminds of the Yacouba's Bestiale somehow, but after a few seconds of hard look, you realize that this is different, in fact, very different. Cannot recall seeing a bike with this kind of center of gravity. And that is what will grab you when you see the Diamante for the first time. Diamante meaning diamond in Italian is Filippo Barbacane’s latest creation. Babacane has already made a name for himself with his edgy futuristic styling and the Diamente is no different, probably only better. I am sure you remember Barbacane and his Firestarter Garage. He had also worked with Ghezzi Brian on the remarkable Kimera. This looks like a new gen street fighter. Like most of Barbacane’s creation, the Diamente too gets a Moto Guzzi donor, and this time it is a Moto Guzzi Griso 8V.
It is not hard to guess how the name was derived. You see the faceted bodywork resembling a diamond in its shape and actually the bodywork also helps to bring in air to cool the engine. The engine is of 1420cc and it has a maximum power of a whooping and stunning 140 bhp. Wow! This is through addition of a new kit of pistons and connecting rods, new electronic injection and enlarged oil cooling, with the radiator positioned under the steering head. And if you think that is wow, see the multitude of tell tale features it brings to the road. In the factory born twin Mandello, the Grislo 8V 1200cc engine has been bored by Lombard Millepercento, a lover and Guzzi dealer. The talk of the bike has been the unique single arm front fork from Gilera CX 125, yes the futuristic bike from Gilera which was doing the rounds in the early 90s.The CX125 was a liquid cooled two stroker and to see what it looked, click here or here. Why that particular choice, well Barbacane just felt it would look good on it! But since the donor had to so far bear only with a 125cc engine, so it was heavily reinforced to deal with the added weight (it required addition of a special plate and major changes to the structure and the steering head with relative bearings), while the fuel tank has been repositioned under the custom rear subframe, leaving room for a huge airbox with a top-mounted intake. You see those wonderful embossed forks, they are also from the same bike which has been also modified. What remains from the original Grislo is the frame, which has not been cut or adjusted in any way, the finalshaft drive and a few things like the tyres and the rear brakes. The front brake isa disk of 320 mm with a bloated 4-piston caliper. 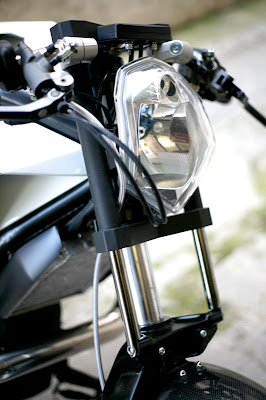 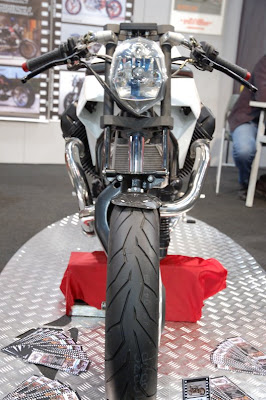 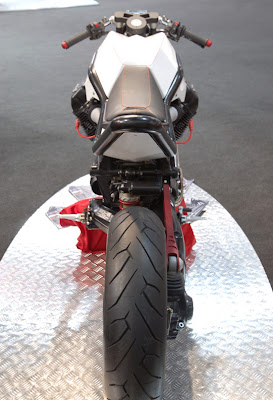 Overall the Diamente gets sharp edgy styling which takes away all the look of the original and if it was not the engine case, it would have been difficult recognizing it as a Guzzi, forget the 8V model. It has a definite forward leaning appeal in the stance. The rear end is just for the rider to seat, absolutely nothing at the rear. I wonder where the number plate will go. It has a minimalist but thick rear subframe. The rear suspension is the progressive link suspension on the single-arm transmission of the Guzzi original CARC. Overall the only black and white colouring is very distinctive and it further accentuated by the bright red wires and the bright red final drive section. The tank has been beautifully crafted by Barbacane and hats off to him for pulling that one so beautifully. Also adding to the ‘diamond’ look are the sharp air conveyors in front

It made its debut this year at the Motor Bike Expo in Vienna. Barbacane will be producing only 30 of these. So if you are looking for a stunning one-of-a-kind street fighter that is light, damn powerful and of course a sure shot head turner, you know where to look! This is one mean looking streetfighter which seems to have spent some rewarding amount of time at the gym.
There are two previous posts of the Grislo in this blog and they are linked here and here. Also there is a previous post of Barbacane and his Firestarter Garage.

Source of information and photos: Racing Café Blog & Solo Moto 30. You can also visit the Firestarter Garage or Barbacane’s Blog although I couldn’t find the Diamente in his blog.