The MV AGUSTA F4CC and the 2010 F4 Official Video
The 2010 MV AGUSTA F4 made its world premier at the EICMA on the 10th of November, 2009. This post is about two F4s which have preceded the new bike. What we have here is the F4CC. This is supposed to be one of the most respected and lusted bikes in the current motorcycle scenario. No wonder it is from the stables of MV AGUSTA and more so, it has something which even MV Agustas usually do not have. The bike has a certain Mr. C. C inscribing his initials on the official name of the bike. Yes, this is the MV AGUSTA F4CC designed by the company’s Managing Director, the creative genius, Claudio Castiglioni. This is an exquisite piece of machinery, THE bike of the generation and it comes with quite a heavy price tag. Well, the F4CC is priced at $120,000. Yes, you can get a lot of bikes for that money, but if you want even ‘One’ F4CC, you would have to pay that specified amount. Well, I guess that makes me out of being one of its potential buyers if if it means I can never have THE bike of my generation. But wait, I do have a chance somewhere. Because for a fraction of its price ($24,995, well not exactly a fraction, but think about the original and this price seems very very reasonable, right!), I can get the F4 RR 312 1078. 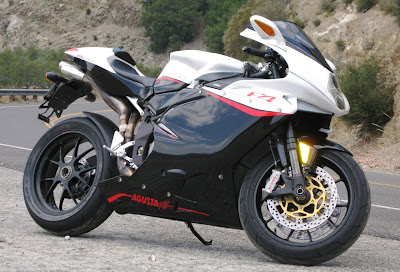 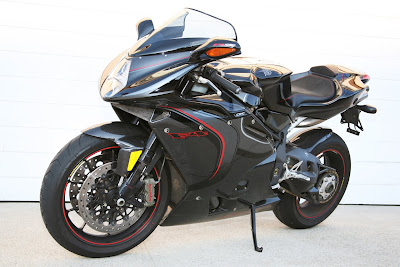 So, why should I pay so much for a bike which is a product of THE bike? You know I can get The V-Max for 20k. Listen Son, this ain’t no Japanese bike with due regards to Japan (which makes the finest production and ‘practical’ bikes in the world), this is Italian and we are not really talking about practicality, are we? But this is not a ‘Show’ bike either. It can make rounds around the V-Max while the V-Max is just getting started. How does a 190 horsepower, 1,078cc inline-4 with radial valves, six-speed, cassette-style gearbox, slipper clutch, 50mm inverted Marzocchi forks with rebound-compression damping and spring preload and large Brembo brakes sound? Good, no! Well, it can also take you to a whooping top speed of 300kmph. But again, for less than that, I can get the DUCATI 1098S, can’t I? Yes I can and why shouldn’t I? Well maybe the brand DUCATI is the ‘Ferrari’ in motorcycles, but MV Agusta is most definitely the ‘Rolls Royce’. 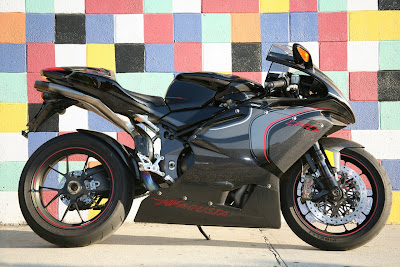 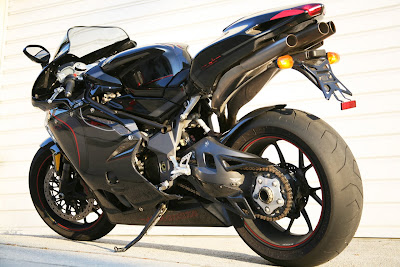 It also sounds good to know that the F4 RR is a mix between the super exclusive F4 CC and the F4 R 312 Why an additional ‘R’? Well, for that you need to take a look at the spec sheet. Well for the RR, it is not exactly for the World SuperBike Racing as its engine capacity is 79cc more than the upper limit in the tournament regulations, at least as of now, but MV is working for its homologation. So, basically, the F4RR is a pure racing beast. New things going on the bike’s engine is an improvement at the peak torque levels which are reached at 8200rpm, a substantial drop from the earlier model which had to reach the five figure digit for its maximum torque. New bling blings include a new headlight, smoked screen and the trademark four pipes which are little bit more stubbier and MV liken them to a ‘slice of salami’. Inherited from the CC are the Sachs steering damper and the amazingly good lookin’ Brembo monoblock callipers which are Brembo racing items as seen in World Superbike, but with an additional dust cover for street. It has aluminum alloy swing arm and CrMo steel tubular trellis frame. 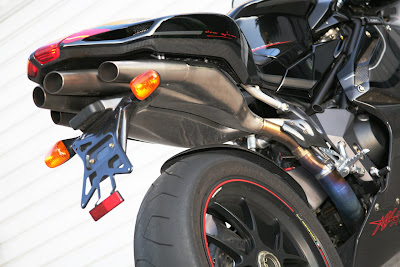 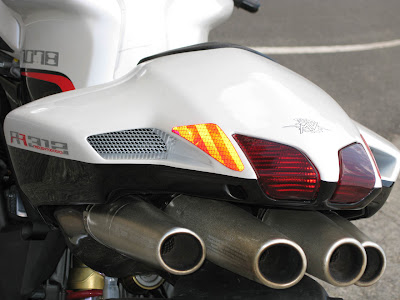 This is one fast talking Italian dude which even after being a copy of THE bike will be hard to beat in exclusivity and it has got some real sensuous styling going for it. Not to mention, it has all the Italian traits like those famed tight handling, crackling acceleration and very high quality finish. It is a bit heavy for a racing bike at 423 pounds, but officially this is a street version, so I guess we can live with that. One thing however may get to you is the heat from the underseat exhaust especially on your inner thighs. But look at the bright side, you will lose so much flab from that region that has been lying idle! So what did it lose from the CC? For starters, it is without many of the F4CC tweaks. Also missing are the cosmetic carbon fiber bits that make the F4CC a gorgeous piece of machinery and in place of carbon fiber, we have plastics. Ouch! And various reports have mentioned that the fit and finish is not the same of what you would expect in the CC, but then again, this is the RR and not the CC. Also the tweaks in the CC gives the exhaust a more ‘roary; sound than the copycat, but the RR sounds good too, in fact, very good to be precise. Also the power delivery is said to be less linear than the CC. I really don’t think we need to be concerned with that, after all how many of us would ever get to actually ride the CC in this lifetime? So, if you leave out the comparisons, the RR will stand ahead of almost any bike that is currently available in the market. And we have already discussed about its awesome power earlier. 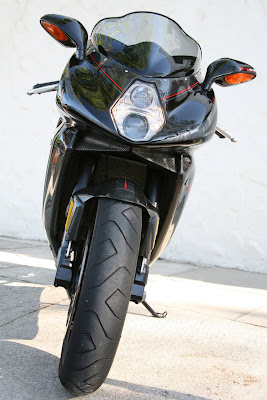 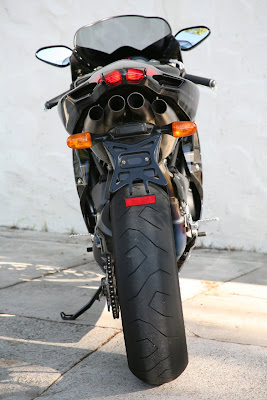 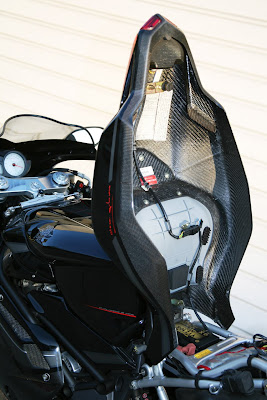 Also it is very unfair to compare the RR with the CC. The CC started off as a one-off bike for which Mr. Claudio Castiglioni commissioned his team to build the ultimate racing superbike without any compromises. The F4CC is not even a bike. It is THE Bike. Let me tell you why. Which bike would have radically arranged titanium valves with components so light that they cut weight by big measurable proportions, have 90% handmade one-off pieces, including brake levers, foot controls and steering damper, among others, multi-adjustable Sachs rear suspension, have things we don’t even imagine like titanium mesh grilles at the engine intake points and not to forget, the bike is made up entirely in carbon fiber including the fairing and bodywork. And make note of this only 100 copies of the MV Agusta F4CC will be ever built which I believe majority would end up in the garages of Hollywood celebrities and International Sports persons. 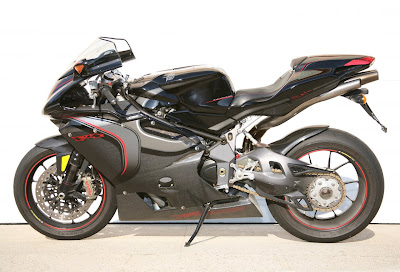 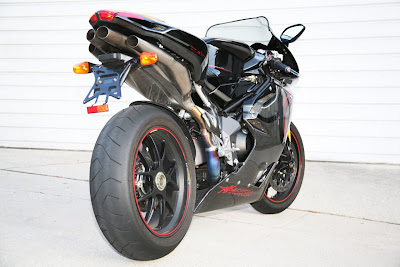 It has the best components available on God’s Green Earth or God’s Technical Earth. It is hand built. The CC is of course based on MV’s F4 heritage. It has been built on the 998cc in-line 4. The 998 cc engine has been further bored to add 80 cc and it produces a pulse beating 200 bhp at 12,200rpm. Just imagine the sound of it! The engine has been developed in collaboration with Ferrari, and the talked about tweaks include polished ports, new combustion chamber geometry, lighter pistons and re-worked con-rod geometry. Extensive use of magnesium components helps it to drastically reduce its weight. The engine is mated to a one-off mechanical slipper clutch and a cassette-style, 6-speed gearbox and all these are housed in the beautiful carbon fiber bodywork. Dual 320mm floating, radically mounted 4-piston Brembo monobloc brakes up front and single 210mm 4-piston rear Brembos does the duty to provide more than enough confidence and security to the rider. And all these components are having the racing gene working underneath their skins. The 50mm Marzocchi fork is treated with carbon nitride. Why? Because it reduces friction, did you ever know about this? Even the single sided swingarm is a one-off piece and take a look at those gorgeous forged aluminum Marchesini wheels wrapped in 190/55 and 120/70 Pirelli Dragon Supercorsa Pro rubber.

Response from the engine is razor sharp, torque is more akin to a MT-01 or a V-Max, it will literally shoot off from standstill. The spread of the torque curve continues throughout the powerband and that is due to the engine's variable length intake runners and of course the tuning done by the finest. It might be not be agile as the Desmosedici, but you will feel super confident on any turn or twist, it is agile and we are not really suppose to talk about the handling, suspension, etc. Or even the Brembo brakes. It’s a compact sleek bike built for a purpose. Race! And beat everything in its vicinity; blow the competition to dust… A look at the gauges and you will see a digital speedo and an analog tachometer and that’s about it, no extra gizmos. The saddle is done in Alcantara. What is Alcantara? Find it here. But let me tell you, it will add up the cost of whatever you are making. Almost all the materials come from CRC (Centro Ricerce Cagiva), a component of Caviga which lends off the F4CC's sharp exterior. If you don’t know what the F4CC sounds like, take a look at the video. The sound is enough to add up a couple of thousands to the price.

Of course the F4RR is not a practical bike and no way is the F4CC, it was never meant to be. And by practical, I mean, you may find the Fireblade or R1 to better handle than the F4RR, but then you again might not, the thing is the F4 is above all that. The Italians are not known for their ‘practicality’, what they are known for is the style to go with the power and all these through very good handling and these F4 bikes are the epitomes in all that. Power, Style and Handling. And there is just no equal. If you think this as an incentive, well MV is gifting a €15,000 Girard-Perregaux Laureato EVO3 F4CC wristwatch that is numbered to match the bike. Yes, each of the 100 bikes are/ will be numbered and it will be written on a special plate adoring the handlebars. MV will also gift a Trussardi F4CC leather with the bike. Good incentives, but it is just that THE Bike is not for me and I really don’t think buyers of the F4CC would care too much about the watch or the jacket. Those who will buy it or let us put it this way, those who can buy it will buy it for its exclusivity. One can always settle for a Fireblade or a R1 that cost one-tenth of the CC and rest assured these Japanese bikes are as good as the F4 in the performance department, but then… you know where I am getting, right. Why repeat the same. And maybe you got a little irritated as I kept on mentioning the F4CC as THE Bike, well there is a reason, this is THE Costliest bike ever manufactured. See this post.