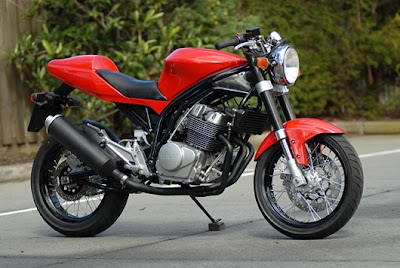 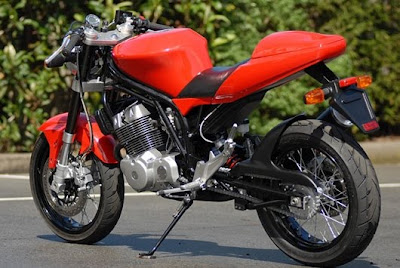 Found the link in The Kneeslider. What seemed initially like a small nicely done up cafe racer turned out to be... wait a minute... that machine has 3 cylinders and it is definitely not a 80s Kawasaki. What is this? This is Vento. But not Vento U.S, the small scooter and cruiser bike manufacturer. this is a Chinese company who sells their products in Australia. Did I say chinese? yes, but Chinese means imitations right, well actually no, there are a few companies who does more than that. Remembar Johnny Pag?. Well, this Vento 400 Cafe GT comes from the company by the name of PTS Motors. You may be thinking this bike looks like a home made cafe racer. Well, maybe it looks that way, but the engine is interesting, I mean I have never heard of a 400cc in line 3. "PTS Motors is one of the few China-based manufacturers of mid range displacement power vehicles, specializing in out-of the box products of International performance. Leveraging global design talent, we are attempting to provide top-notch styling and design solutions." proclaims the website.
So the company started in 2002 mainly to support overseas customers and importers of Chinese scooters, motorcycles and ATVs and going by the website, they seem to have done pretty well as till date they claim to have exported more than 300,000 units of vehicles worldwide from China. The guys seem to be pretty serious about their work and straight forward. According to them, it was the lack of high displacement engines and vehicles from China and Taiwan that encouraged them to invest in a 400cc triple cylinder engine development and they are hopeful of international recognition and acceptance in the future. They are totally focused on exports which mean these small machines are not available in China. But if you really like them, you can shoot a mail to them and they respond quite quickly and positively. They have their own R & D centre in Australia.
Like many other manufacturers from China, they have also started venturing in ATVs and the company has an ATV with the same 400cc 3 cylinder engine. According to them, this is the first motorcycle with a 400cc triple cylinder engine. And I cannot challenge them with my limited knowledge. 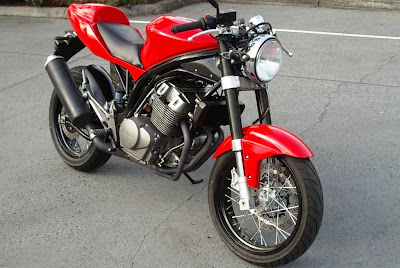 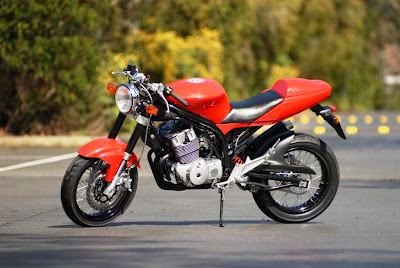 But why a 400? The answer to it is quite simple. Why not a 400? If you want a 600cc bike, you will be lost among the options, from single cylinders to 4 cylinders. But if you want a smaller bike than a 600, most of us would need to settle for the single cylinder 250cc to 300cc Honda, Yamaha and Suzuki models, besides a Ninja 250 or a Hyosung GT250R. And there is nothing in between save dirt bikes and the likes. So if you want a bike in between these options and more so, if you want a bike which shouldn’t be overwhelming like a CBR600RR, something affordable, yet fun, light and easy to handle but something not exactly in the learner class, then it is the Vento 400 Café GT. This is a light 348 pounds, nimble more-than-a-commuter which has a reasonably good power output at 34 horsepower belting out from the 3 engines with a total cubic capacity of 400. If you are thinking that the smaller Ninja 250R makes the same amount of power, then you have not got the picture. A twin cylinder with 250cc disposing 34 horses and that too coming with a racing gene and an in line 3 with same power but bigger capacity are as different as enduro and a street tracker.
According to The Kneeslider, the engine was designed by Ian Drysdale in 2004 for the same company for the Vento Reptile ATV which entered production in 2007. The machine was designed by Nic Butti, Mario Cisneros and Richard James who worked on the model via emails! as they operated from China, U.S and Australia respectively. In joined Drysdale in 2008 and he showed the guys how to work on a triple and the prototype was developed at the Drysdale Motor Co workshop. The second prototype was completed this year summer. Cisneros of Vento tested the bike in Australia and now the bike is going for production.Vento’s concept is that for an able urban vehicle, what you actually need is good handling, balance and reactivity with adequate amount of power because you may have a radically designed engine with hundreds of horsepower, but where are the roads to drive in a normal urban setting? And if you still insist on wringing the throttle, the long arm of the law just might be waiting for you. So Vento designed the Café GT to make the rider feel comfortable and relaxed when sneaking through traffic and the model is especially aimed at young riders and female riders. And according to them (and it makes sense) 35.5 bhp is ‘adequate’ enough for city driving. Remember, it has 3 engines, so definitely it will be smoother than a twin. The engine is a simple air cooled unit and the design is very simple with nothing radical on the bike. Although the pictures here show a bike with no graphics, do expect a few, at least the brand name on the tank and that would probably enhance the appeal as right now, it is a bit too staid. They have knowingly stayed away from the plastics covering up the bike and as they have named it, have tried to keep the café racer originality on the bike without copying any classic model.

"Riding your 400 Cafe GT to your appointment and parking it there will let you feel (and look) better. Lock the helmet on the side of the removable passenger’s seat cover (production feature) and forget about scooters." The last line definitely confirms as to which crowd they are targeting. 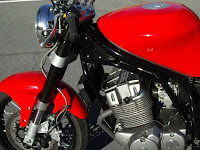 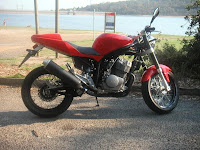 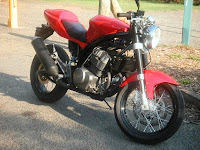 Cost of the bike is expected to be low as Vento has used most of the components from China. Not that it anyway means it is going to have inferior quality, the thing is that labour charges in China is very low and this gives a very good cost cutting edge in any made-in-China products. So Nic in China got all the cycle parts from different Chinese production houses. Test rides have reported that the Vento Café GT is a competent machine on the road with its 6 valves. The 400 Cafe GT is proposed as the first of a range of motorcycles that will be based on this engine with each model styled for a different market segment. So far, there has been no mention of its price, but you know this is not going to cost much. It is a simple ‘fun’ bike on the lines of say the Honda VTR 250 or the Yamaha SR400, rest assured, this bike will definitely bring a smile for the targeted audience.Take a look at the Vento 400 Café GT in the PTS Motors website. There is also Caffe Tripol 400, a very beautifully done website on the bike.