There have been a few mails that I would like to 'show-off' which you may deduct it as an act of 'self gratification'.

One such mail came from Jay Leno, yes you read it right, Jay Leno. I had made a post on the wonderful collection of classic and modern motorcycles that Mr. Leno has and apparently I had given out some incorrect facts which his longtime associate Ms. Helga further corresponded detailing

"Jay Leno asked to let you know that he has owned most of his motorcycles for a very long time, in fact a lot of them for decades. Your article might create the impression that Jay is purchasing these bikes recently and adding a lot more frequently than what is reality.
Thank you for your consideration".

I haven't rectified the same and yes, I need to correct that pronto. For obvious reasons, it would not be proper to post his mail ID or phone number.
Then there was another surprise mail and this was none other than Mr. Clay Rathburn, owner of Atom Bomb Custom Motorcycles and in the subject line was 'Thank You' and I knew it must have been for the post I made on Atom Bomb Motorcycles.
Mr. Rathburn wrote

I just came across your blog and the very kind words you had to say about my motorcycles, so I thought I would drop you a quick word to say thank you. I'm glad that you dig what we're doing, it's very rewarding to know that people are enjoying Atom Bomb's Motorcycles.
Just so you know, I actually work by myself most of the time, Chris Mizak only does the paint work (and lends moral support!). He has a regular job and does Atom Bomb paint at nights and weekends. That's why you will only see two or three bikes a year from us!
Thanks again, and very kind regards,
Clay Rathburn
Atom Bomb Custom Motorcycles
5039 Bradshaw Rd. Salem VA 24153
http://www.atombombcustom.com/
540.580.2231

Of course I replied to the mail, what do you think?
And then there was a mail from a gentleman Mr. Tommy Norton from Belfast who had owned 3 DUCATI Indianas and currently owns a Indiana and also has 2 frames which he is thinking or rather already set his mind on to customize into a bobber and a trike. One of the images he sent has Dave Hailwood sitting on it and as I read the mail, although I read Dave, my mind was reading Mike so when I saw the photo, I knew that it was Dave and not Mike Hailwood. Not too sure who Dave Hailwood is and I am really sorry for my ignorance, I have mailed him Mr. Norton back today wanting to know about Mr. Dave H. In the mail he wrote, 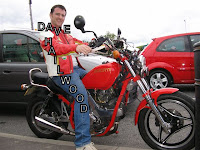 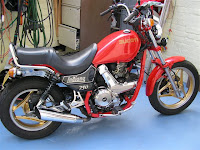 Hello Diesel,
I was looking through the web trying to get the right colours to paint my Indiana, when I came across a photo of 2 of the black Indiana bikes on your web-page. I did have 3 Indiana. As you can see in 1 of the photos I have sent, Dave Hailwood is sitting on 1 of those Indiana after it had been repainted red. I told Dave Hailwood to tell Mr. Ducati there should never have been any black Indiana. Yes there were only 2318 built in total, (over the 3 year run) 800 of 350cc, 1014 of 650cc, + 504 of 750cc. I still have 1bike and 2 frames left so I am changing my Indiana into a red bobber type for the road and building an Indiana trike later when I get the funds. I like the old Indian bikes used on the “Wall of Death” stunt riding, so red + cream seem to be a good colour option for me. Enjoyed your site. I hope to get out on the Indy tomorrow for a spin if it doesn’t snow.
Take care, Tommy

One more mail which I am proud to mention is from BIKE EXIF.

Hi,
Hope all's well in the Visual Gratification world. Loved the Roland Sands piece, I'm a big fan of his stuff.
I wanted to ask you a question: I'm going to be on holiday soon, and I'll only have intermittent internet access and spare time during that period.
Rather than put Bike EXIF on hold, I wondered if you would be interested in writing - say - 5 posts on sporting/retro/racebikes before Christmas? Given that we both have a very similar taste in bikes and your writing style is close to mine.
Cheers,
Chris 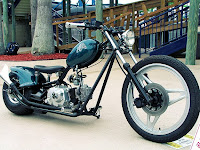 Of course, I was more than happy to oblige. Chris has done a great job in posting information on rare bikes each and everyday for the last year and a half or more and BIKE EXIF has also become a favorite among many bikers for its daily mail.
I have sent 5 posts to Chris and two of them have appeared in BIKE EXIF, one on SUNBEAM S7 and one on Lil'Dog. It was interesting to post a small write up on rare and customized bikes, but what I found rather difficult in 5 days itself is finding such rare bikes everyday which should be interesting enough to maintain the high standard set by Chris and he has been doing it for quite some time now. Hats off to you.
P.S - The mentioned posts have appeared on the 24th and 27th of December and the next posts will be appearing on 30th December, 2nd and 5th January.