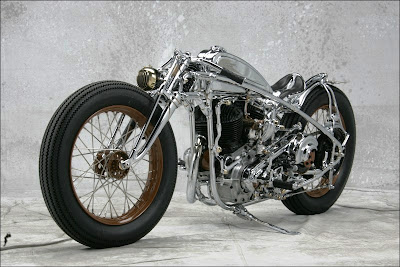 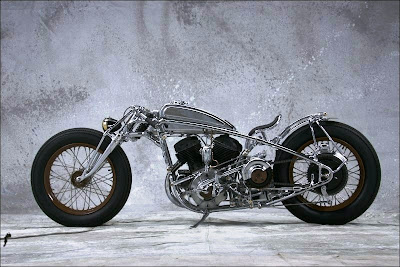 These bikes will cost you a cool million dollars. Yes and that is the good part of it and if that is the good part, what could be the bad part? Well, you cannot drive it! Welcome to the world of Mr. Chicara Nagata. Mr. Chicara is a biking designer extraordinaire. He is from Japan. Besides being the hub of motorcycling world and sushi, it seems Japan is also a haven for extraordinary designers. I am sure you remember Ritmo Sereno. It is not that anyone had ever any doubt about the Japanese being such elegant designers, and if there was, Mr. Chicara is all out to prove the world wrong.
These non rideable bikes are meant for visual pleasure or better say, visual gratification. What is doesn’t hide is the deep passion and undying love for motorcycles in the land of the rising sun. When it comes to art, we have seen the Japanese Custom designers, but Sereno and Chicara takes it altogether to a whole new level. Mr. Chicara Nagata is the owner of the Chicara Motorcycles firm located in Saga, Japan. The bike you see as Art 1 (Chicara Art) has actually made it to production of course I mean as a prototype design and Chicara was voted the 2006 Official World Champion Custom Bike Builder in the ‘Freestyle’ category. In 2007, he finished second with the Art 2 bike. For the record, Mr. Chicara has built 13 bikes to date.

The ‘Chicara Art One’ is a hand-crafted steel, aluminum and chrome tribute to the 1937 model U Harley-Davidson. Why it stood out in the AMD was because of its originality, concept, high precision level and very high finish level. Not to mention the engineering involved with cues of retro styling that must have swayed the votes for this beautiful thing and just for a note, it beat the second prized competition by a whopping 239 points. Such was the overwhelming response for the Chicara Art. The engine is a V-Twin 1200cc unit obviously with a handmade Chicara frame and front end. The wheels in the front and rear are both early steel wheel of size 18” and the tyres are Firestone 4.50 size. The brakes at the rear are stock. Chroming and plating has been done by Fukuoka electro plating while the high quality paint is courtesy JUN paint box. Ignition is via Moris Magnetto. Flywheel and connecting rods are also stock and so are the engine cases, heads, gearbox and valves. The exhaust, front suspension, hand brake kit, foot clutch, throttle and transmission are Chicara originals, gas tank, oil tank, steering bar, tailight, chain tensioner kits, kick arm kits and kickstand are all handmade. The bike gets inspiration from Marlon Brando’s The Wild One.
‘Chicara Art Two’ which came second as mentioned in 2007 is a flathead powered chrome covered custom that has a similar style reminiscent of Chicara but that is about it all. This is also a American Motorcycle inspired design but heavily differs from Chicara Art One. This is also not a running model but of course you knew that given the extreme riding position. All chrome, a sexy and awesome front suspension and a very unusual frame that is suspended with a single shock on the rear were enough to draw the Chicara Art Two to a respectable second position. The bike has a four-speed box from a Triumph and typical of Chicara, he finished off the bike with a set of 28” spoke wheels. It looks so bare bones but think how much of brain storming must have gone in designing the engine itself? And doesn’t the small cycle seat look so nice on it? And hey, how can we not see the beautifully crafted front suspension? 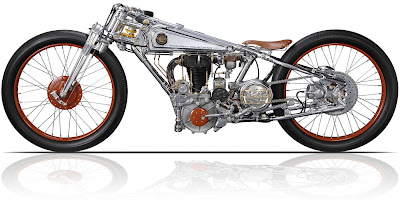 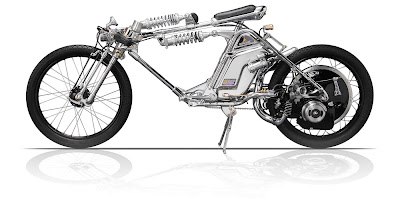 The ‘Chicara Art Three’ is a 2008 product based on a 1950 Meguro Racing Motor. The engine displacing 496.5cc produces 28 hp@5500rpm. It features a OHV, stock displacement with stock connecting rods. Also stock on the bike are the heads, valves, pushrods, cams, lower end and flywheel. The pistons are from BSA/ JP (0896 std). It also has a Moris Magnetto ignition and the carburetor is from Linkert, Chicara works his magic on the carb cover and the exhaust. The oil pump is from a Honda XR250 while the gear box is from a 1950 Triumph and so is the trans sprock. It has 4 gears. The engine Sprocket is from Bob Newby Racing. The rear sprock is an original Chicara 4 Unit Frame. It features a rigid frame with a handmade fork. The shock absorbers are from Ohlins while the front suspension is an original. Also the hand brake kits, hand clutch kits, rear brake control kits, foot shift control kits are all in house items. By the look of it, you know that the gastank, oil tank, steering bar, headlamp, primary cover, brake & clutch levers, oil reserve tank, tailight, belt tensioner kits, chain tensioner kits, kick arm kits, and kickstand has been artistically designed by the man himself. The front and rear wheel rim are MTR-Cycle clincher of size 28" X 3" while the front and rear tyres are Coker Classic all black rib of size 28" X 3". The painter is Junya Tsugama using the JUN paint box.
The ‘Chicara Art Four’ is a interesting concept using a 1966 Honda moped engine with a output of 1.5 hp coming from the 50cc unit. This project also belongs to 2008. It does look more of a cycle than a motorcycle if you know what I mean. The displacement is stock here again and just like the former 3 products, this machine also uses stock pistons, lower end, flywheel, connecting rods and engine case. The heads, valves, valves spring, pushrod, cams are all stock too. The gearbox along with the clutch is from the original bike. The engine breathes through a Keihin carburetor with an in house carb cover. Again the exhaust is also designed by Chimara.
Of course, the frame, front suspension and fork bear the distinctive Chimara look. The handles bearing both the front and rear brake are chimera originals and so are the gas tank, electric box, steering bar, headlamp, chain tensioner kit, center stand, taillight kit and license lamp kit. The front wheel rim is of size 2.00" X 17" while the rear wheel rim is slightly bigger at 2.25" X 17" Tyres are Michelin of similar size like the rims. The painter is Junya Tsugama using the JUN paint box. 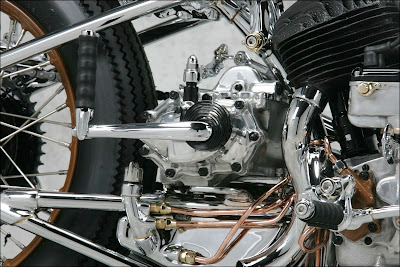 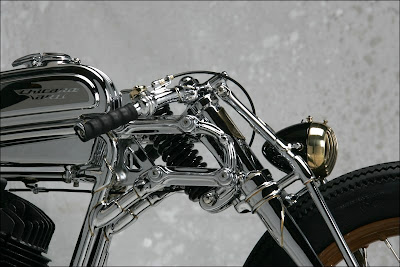 The last photo on the post shows all the bikes which means all four of the bikes have come out of paper to being in material although I couldn’t find single photos of the Chicara Art Three and Chicara Art Four. All in all, Mr. Chicara’s bikes combine vintage engines with ethnic styling (if I can use the word) with the major parts like the frame, drive train, suspension and steering components built in house, all hand crafted.
The bikes may be subjected as impractical, but that is of course beside the whole point of their creation. For example in look at the Art III Classic, here the fork connects to the main frame by a flexing linkage that houses a shock absorber. This definitely means that Chicara has not though about the riding pleasure while designing the bike nor has he thought about the performance. To repeat myself, do not look at the bikes as some sort of machines which are just custom bilut. These are subjects of art. The bikes have beautiful copper and brass fittings and after you concentrate on any of the model, you start realizing how these designs have have come forth. His inspirations from early Harleys, the engine-strapped-to-a-bicycle models of a century ago all molded in modern high tech machineries of today. Past beauties recreated in new age designs seems to be the underlying objective of Mr. Chicara Nagata. 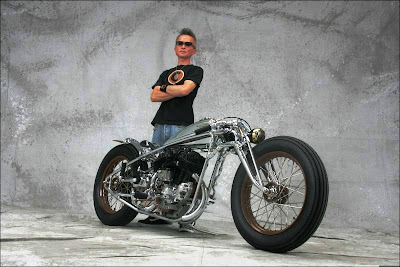 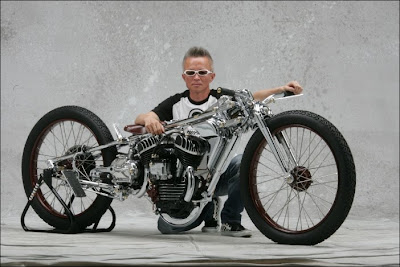 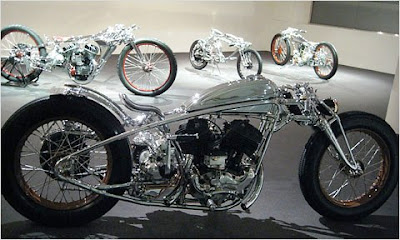 I was really curios to know what this gentleman was doing before he shifted gears in his profession and it seems the man nearing 50 now started his career as a graphic designer. Always fascinated by American motorcycles of the 40s and early years, he finally gave shape to all his innovations a decade ago when he started off his Chicara Motorcycles firm. His motorcycle were displayed at a show event named Ippodo which was an event for designers. The event was organized in New York from November 08 to January 09 and his stall was named Chicara Liquid Chrome. Born in 1962 in Saga which also has his firm, he established his firm CHICARA in 1992, but that started as a graphic design agency. One year later in 1993, he started customizing Harleys and also participated in a Harley Custom show in Japan for the first time in 1998. In 2005, he participated in Harley custom show in Belgium, Germany, and France, winning a total of six awards. And then came his world wide recognization in the AMD Championships. He had also participated in the AMD Asian Championship held in Malayasia in 2007 and won the event. All these would not have even happened in the first place had he not survived a horrific accident when he was just 16. Oddly, during his recovery period of 8 months when he underwent many blood transfusions, he soul searched his motive for his second life and he knew what he needed to give back to the society. His art is his expression of gratitude to the people who donated their blood and worked to save his life.
He says that there are around 500 parts to each motorcycle each of which he has hand crafted personally and each bike took about 7500 hours to build. There is no large machinery in Chicara's atelier. Other than the antique Harley Davidson engines, the almost 500 parts woven into his motorcycles are each crafted by hand, with each bike requiring approximately 7,500 hours to build, that’s 930 odd days of normal 8 hours work or 42 months of yours and mine regular work schedule. Imagine the patience of this man! Yes, it is difficult to imagine that one person could complete such a work alone, but this guy have moved on and on with projects after projects and all oh! so good.

Chicara’s technique is exquisite and his imagination is wild but beautiful (actually it should read wild and beautiful), this man is a visionary. Whether his bikes are rideable or not, it hardly matters. Look at these beauties as a piece of art. This is meant for decorative purposes, I for one would not like to spill even a speck of dust on it by making it run. And not that I could afford one either. But if you look at the website, it is written on the home page that “Design and handling are focused on their ultimate goal” and even on the Ippodo website, it is written that the bikes are functional, probably which means that the engine will start. But whatever it is, I mean, it is for $1,000,000. Good Lord! I could jolly well buy Jay Leno’s garage with that kind of money, imagine a garage with Ducatis, Harleys, Vincents, Nortons, Agustas and all the Jap machinery and you will still have loads of money to burn or you can settle for just one non-running Chimara! There, this time I lost it! But the bottomline for those who can afford it, this is surely a lifetime investment.
Source of pics and info – Chicara Official website, AMD Championship and Ippodo Event