I would request you to turn on your speakers and watch the video if the images of this custom bike haven’t already fascinated you. And if it has, then I would recommend you to watch the video for an even greater impact. And despite my request and recommendation, if you have still not watched the video, then I strongly suggest you do it now! What? What bike is this? We will get to that later, just watch the video. Okay… now, I am sure you know about the bike and in case if by some reason if it failed to imprint itself in you, this is the Overmile by Fred Krugger.
Now that we are pass the initial knowing-each-other thing, lets get to some basics and the reason being that this seems to be a bike which can be yours.
Okay, I probably got that wrong and by now you probably have fallen off your seat laughing hysterically. What I meant was that this bike can be made. Haven’t you heard that imitation is the best form of flattery? And how best can you flatter Mr. Krugger but by making an imitation of his beautiful Overmile. I am saying that this bike styling can be imitated to a great extent. Of course you cannot replicate it, but you can get close. See it is basically a very simple bike, right? 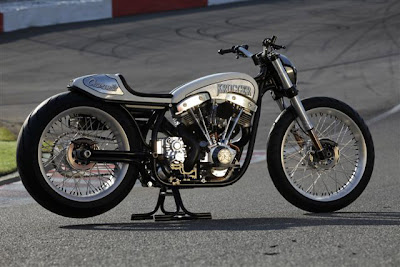 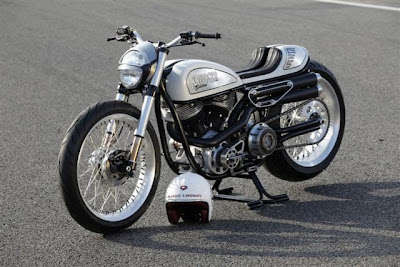 Or so I (and probably by now, you too) thought. Okay, you need to get that out of your head, this is not just another custom bike, this is the bike that was placed third in the Freestyle category in 2009 at the AMD Championships, where Krugger (as you know) is a regular. The bike also won top European bike builder in the competition and the top ‘streetfighter’ award at the famed Rat’s Hole Show. I would admit that initially when I saw this bike, it of course looked very beautiful but something which probably can be worked out. But the guys at AMD are not people like me, they are pros and they know a beauty when they see one. If you think you could make a bike this elegant, then probably you wouldn’t have been reading a blog but instead would have been working with the spanners. 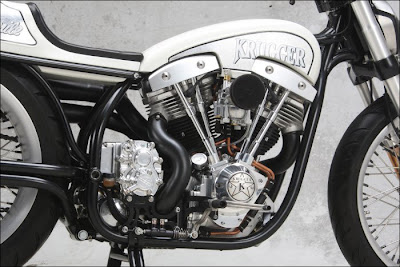 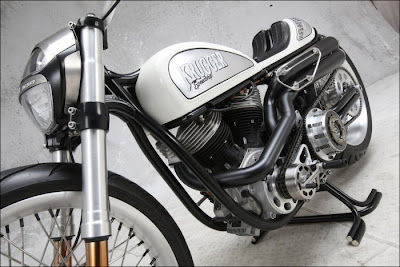 Krugger’s favorite bike is the HD XR750 and this tribute to the legend. The resemblance is of course evident at the engine but there is something more which tells you it is the XR 750 yet difficult to point out exactly what. Overall, the Overmile has been given the new ‘in thing’ treatment of retro looks with modern technology. Easier said than done, its getting the act together which separates the men from the boys and one look at it and you jolly well know that this is ‘the real deal’. Of course having the XR750 on its genes means that this is also a performance powerhouse, but Fred has gone a few steps ahead in adding some more detailed work to the bike to substantially increase its power further. Getting to the creative details, in his words, “It’s powered by a 103' S&S, flipped Baker 6 speed, air ride shocks, Beringer In board braking, stainless steel exhaust… Gasoline is on the back fairing (2 gallons), oil tank is on the left side cover (0.8 gallons), air compressor, 25 amp battery and some electrical stuff on the right side…” 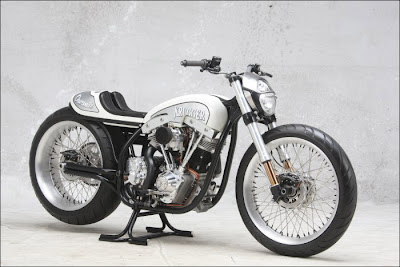 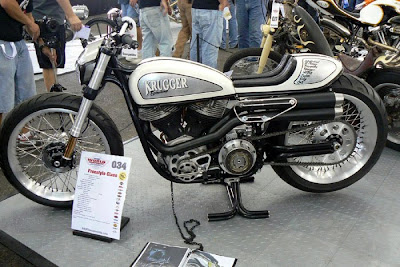 Let me give you a very brief on what S&S Cycle does in case you are not that well informed. S & S Cycle has been a leading manufacturer of Proven Performance v-twin motorcycle components and engines for over 50 years. Founders George Smith and Stanley Stankos became friends way back in 1958 and their respective name initials made the “S & S “company. From ported heads to big bore kits, S & S is one of the most recognized brands in V- Twin performance kits. This means the Overmile with a looks to die for body has an equally head banging engine beneath it. Now if you don’t find any disc brakes, don’t be alarmed. No not that it relies on drum brakes, but both front and rear hubs have Beringer Inboard brakes. (Now what are these?). Beringer Inboard brakes are using new technology which weighs less and offers better braking capacities. Taking a cue at the design, just see how beautifully the tank has been crafted and the cut in the tanks to accommodate the rocker boxes. The engine is black and nickel and complimenting that is the whitish colour adoring the tank and the rear hub. The Ohlins front forks and the single retro styled head lamp (or is it a twin, one placed over the other?) has a touch of silver which gels extremely well with the tank colour and breaking the monotony of the white colour over the tank and hub is the name Krugger written over a silver finish stroked in black. The seat has been split in two and on the left side of the bike, you see the twin scrambler styled stainless steel exhausts. The frame and swingarm are obviously home built by Fred Krugger. The bike’s suspension is aided by Fournales airride with integrated compressor. 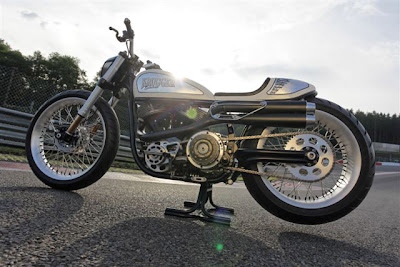 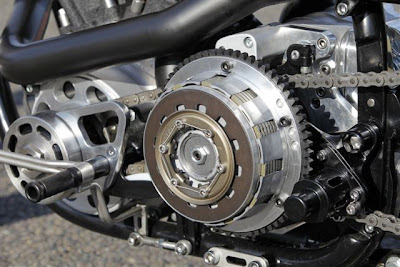 There is a mix of café, scrambler and road styles and overall the naked retro styled bike will most definitely score a perfect ten in terms of look. Somehow, for me the highlight of the bike has been the wheels. Cannot exactly say what it is, but the spoked wheels looks absolutely delicious. I guess performance would be hampered by the fat rear tyre, but it looks and compliments fabulously to the overall design of the bike. The 21” front and 20” rear wheels are from HD and wear Avon tyres 120 and 220 respectively.Fred of course is a well known figure in custom designing and he knows how to keep it simple, rather how to make it look simple. See his other well known beauties like Halfday and Racer for example. Of course, all the bikes are not similarly styled, you can see that the Goodwood is on a completely different platform altogether.

To understand a bike, more so on the performance front, Fred has an advantage as he himself is a former Enduro & Motocross Racer. Born in 1970 in Malmedy, Belgium, Fred’s first motorcycle was the puny Honda CR50 and by 1986, just 16, he has his first brush with customization when he worked on the engine of a Suzuki ZR. By 19, he already had multiple titles inhis country’s Enduro racing circuit. He has also had his hands on car rallies and is an experienced coachbuilder (sheetmetal repair, metal shaping, etc) and that shows in his products. It was only after he became a full time parent to his two kids that he shifted his interest to custom building bikes and the Racer was his first creation.
It has been a real good move that Fred took up custom designing or there would have definitely been one major talent untapped in this field.
All in all, from the Royal Enfield inspired handlebars to the two minute tail lights at the rear, this is one beauty you can draw aspiration from. I am not saying to replicate it or imitate it, but the fact if you can gel simple things together and make something beautiful, maybe you should try your hand in custom building. Of course, it may end up as something bizarre, but then… you have to start somewhere, right? Just to get an inspiration, see how you react after watching the video, if it doesn’t raise your hormones, you need to change your field of interest.
Visit the Krugger website to look at all the beauties and you can also know more about the Overmile.
Pics and info sourced from AMD Championships, Krugger Overmile website & if you would be interested in knowing how from makes his bike from scratch, here is a nice link.