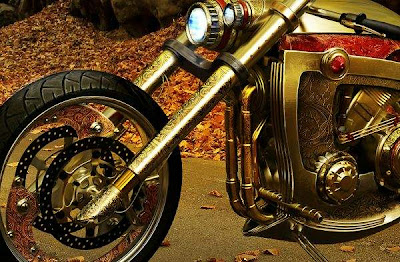 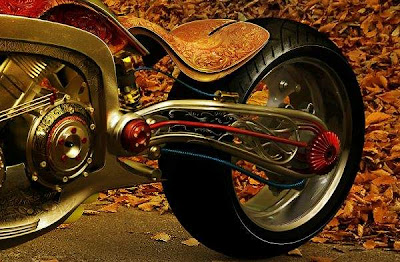 Man, here is a bike worth in gold. Literally. This bike is made with gold and yes, you read that right. Of course not all of it, but you can see pure gold being etched on many parts of the beauty. We will come to that later. Let us start off with the creator, a certain Mr. Mikael Lugnegard, who in my limited scope of knowledge has been a total stranger. Hence forward, this will be a name to remember. Mikael is only 31 years old, he hails from Umea, Sweden and is a sketch artist and he himself admits that he is very passionate about designing. Although he has a background on industrial design, he considers himself more of a concept designer. To give wings to his passion, he created Lugnegard Design in 2005.

Okay, now getting inside his latest creation, Mikael call this thing of beauty ‘Seraphim’. Seraphim means a class of celestial beings as mentioned in the Hebrew Bible (wiki) and there is also a mention of Saint Seraphim (of Sarov, Russia), who was/ is one of the most renowned Russian monks. So anyway you take the meaning, you know there is something heavenly about the bike or to sound cliché it looks out-of-the-world. Maya is the name of his workshop. Okay, now on to the bike. Overall it is just so muscular that the first impression has to be a Wow! And muscular with just the right proportions in the tank and around the engine, not edgy like the Ducati fighter, it very well rounded, muscular like it goes to the gym just to maintain its naturally endowed figure. It’s semi naked and so the looks even more beautiful. The headlamp is extended from the tank giving it a short but muscular neck. This is the type of bike where the Hollywood superheroes, the big guys like Batman would look fantastic, don’t you agree?

The long front bars should have given it a chopper styling, but the short handlebars and its compact design makes it more like a cruiser. Look at those beautifully designed wheels, I don’t know which metal has taken the place of alloy or if it is also made in gold, but it look so good. The engine finish is also crafted with a golden finish and those shiny things are probably precious stones. Also one more thing, just using the golden colour will never or can never make a bike look this good, you have to get the entire package right. Of course, the golden bit does elevate the overall appeal but even for that you have to get the groundwork right. And Mike has done just that. The double cradle frame, a saddle-shaped seat, the bent swingarm, everything complements each other and that is the secret of making a great looking custom or even a prototype. Mike (as he is called) states that he is heavily inspired by luxury time-pieces, hand-made western saddles and the kind of engraving you´ll find on, for instance, the legendary Smith & Wesson that was used by Wyatt Earp.
This is really one-of-a-kind motorcycle and although it is open for everyone, we just jolly well know what kind of clientele would be inspired to get this bling bling thing inside their garage. This is a bling bling and Mike has not even tried to hide it, but what additionally it brings out is the desire of a true artist. Really, it is just so good looking. See the other picture, the Seraphim in black metal, Mike wanted to give the seraphim a Mad Max style look, the apocalyptic look and no one can say it looks even a shade inferior to the ‘Golden One’. Then there is the seraphim Alpine Star edition and it also looks good. The point I am trying to make (which you must have got it by now) is that the design is so correct that you put any finish to it and it will look good. Just imagine it in fluorescent green and I bet you, it will look good in it too. 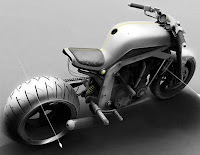 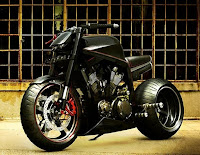 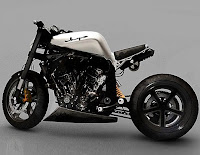 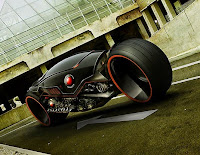 Surprisingly, this project was ordered by CmiVFX as a online training material. I use the word surprisingly because I wonder had the company didn’t order the design specifications; we would have probably never seen the beauty. Check out his website, Lugnegard Design, its chic, its cool and it is not just about bikes, you can learn quite a few things about designing if you are interested, there are tutorials on something called ‘prismacolour’, don’t know what that is. There is also another bike ‘The Slugger’ with its grey variant featured on his blog although no details are posted. Then there is also the Red Scarlett. You can visit his wordpress blog to have a look at his designs. He has created a google blog also though it is not very regular. Mikael has also shared his knowledge in the Designer Techniques website. Also scroll down the page and there area few more links which you might like.