NCR Designs the World's Most Expensive, Exclusive and Exotic Ducs 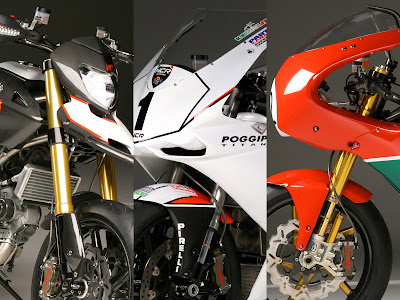 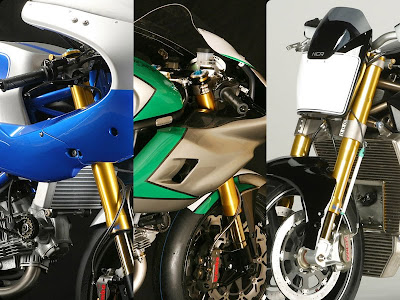 The Italian factory NCR makes one of the world’s premier racing bikes from stock Ducatis. In case, you are not very familiar with the NCR Factory, let me give you a brief of its background and related work. NCR makes racing bikes as mentioned from stock Ducatis. They have been doing so since 1967 and their bikes as expected are very expensive. So far, they have made 6 designs out of which one is for the road and the others are only for tracks. Of course, some of the race-only bikes have now been customized for production. Racing bikes itself are pretty expensive and I do not mean Moto GPs. Just track racing bikes are very expensive and add to that Ducatis acting as stock with engineers from Italy working on it, you can well imagine how expensive these bikes can be. In fact, one of the NCR bikes (I will come to the name in a short while) will cost you upwardly of 6 digit figures in dollars and even the others are very near to the 100, 000 USD mark. Bottom line is NCR is a factory which customizes Ducatis into very high end exclusive bikes which are very costly. Can not be clearer than that! So what are these bikes made of and how do they perform?
Again, a little history. NCR was born in 1967 in Bologna, Italy under the guidance of Giorgio Nepoti, Rino Caracchi, and Rizzi. N C R comes from the initials of their names. Later Rizzi left the trio but the name NCR was retained with R standing for ‘Racing’. They created (way back then) a mechanical shop which was tech driven and much ahead of its time. They started out with what they are still doing, converting stock Ducatis into racing bikes. You can well imagine their expertise by now since they have over 40 years of experience on this job. Surprisingly Bologna, as you know, is also home to Ducati. And just to give you a taste of their success and what they have achieved, how about the magnificent Ducati 900NCR on which Mike Hailwood won the 1978 Formula 1 World Championship in the Isle of Man. I am over sure, any motorcycle enthusiast would know about the NCR 900 or at least seen it in some magazine even if you failed to recognize or recall the bike. 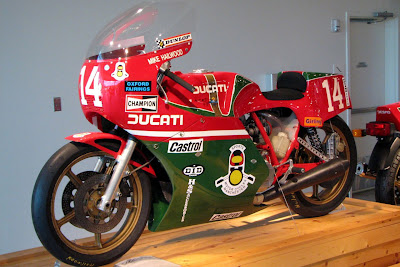 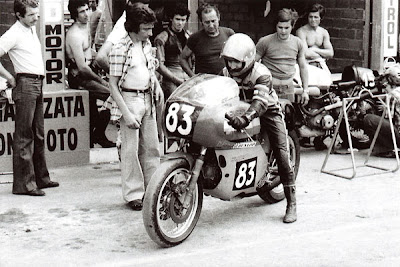 First Pic: The hallowed Mile Hailwood Ducati 900 NCR, Second pic: Archeive
In the 70s, Ducati didn’t take part in racing, at least directly. What they did was give parts of their bikes and also parts of their chassis to racing engineers. The engineers would further make the frames lighter and make the engines more powerful. So it was NCR’s responsibility to turn the not-so-timid Ducatis into race monsters. The NCR team was of course the first official racing team of Ducati and as such since the very beginning Ducati-NCR stands for racing… with a passionate heart and technology driven head. Ducati NCR became quite synonymous with racing and of course success and so people all over the world started to sought for these bikes and so NCR became a professional production unit from being a pure race firm, but only in numbers, that is they reproduce their models only on client’s demand.
Since any racing bike has to be 100% accurate from the materials involved to the tuning, NCR develops almost all the parts of the bike that needs modification from a screw and a bolt to anything above. Of course there are other parties involved who had been a part of NCR previously or currently especially the Poggipolini Group and they also are equally responsible for the NCR success story. Every part of the bike that needs modification or alteration is hand built with space age technology and the common aim of all involved is the attention to detail. In 2001, the ‘N’ and ‘C’, that is Nepoti and Caracchi retired and the Poggipolini Group took over but of course retaining the hallowed initials NCR. 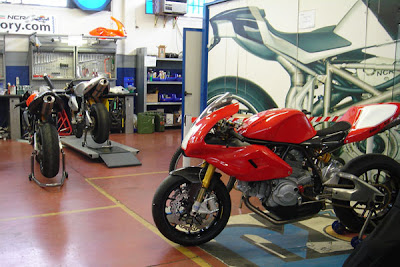 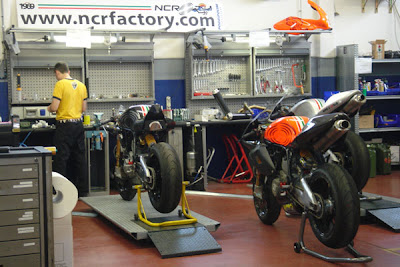 The NCR Factory at Bolagno, Italy
Led by Stefano Poggipolini, the group specializes in lightweight alloys such as Titanium, Magnesium, and mixed metals like special steel and other components and they have been supplying these high end quality products to different markets including Formula 1, MotoGP, Aeronautics and Marine industries. This means they know as well as the world knows what they excel in. And what better than to make an impact in racing motorcycles also under an esteemed brand like Ducati? But Stefano also wanted to make production bikes, road legal and it was only in 2005, that NCR were permitted to make road legal production bikes. Obviously, it wouldn’t be just any production house, I mean, Ducati itself is elusive and customizing Ducatis according to client’s needs means we are looking at exotic bikes and that is what Stefano always wanted. But having his heart always in racing whether it is F1 or MotoGP, his goal was to manufacture exclusive bikes and to create a R&D wing which he did. 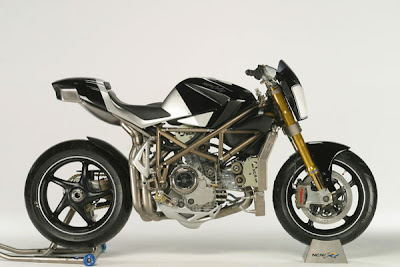 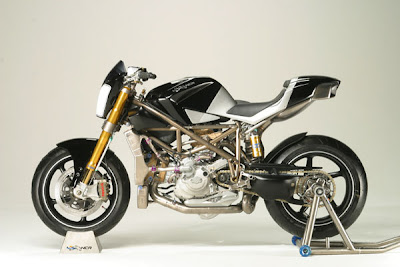 Now, since we are done with the history lessons, let us get into the juice. Till the Poggipolini group took over, NCR was involved in making very high quality racing bikes. After the group took over in 2001, they started with concept bikes and prototypes. By 2004, there were 2 running projects, MILLONA and MACCHIA NERA. Just so that you know, now if you have the money, you can drive the MILLONA, yes, it is now in production. But it is the MACCHIA NERA Concept that is the crowning jewel of the NCR factory. That also of course means that it is the costliest bike ever coming from the factory at a whooping $200,000 making it the most expensive production bike (if you overlook the 4-wheeled Tomahawk).
This bike is built around a Ducati 998RS engine and Stefano’s goal was to create an extremely high tech motorcycle that would be “the ultimate track bike”. The stock engine is fitted with lightweight metals and alloys like titanium and aluminum and also carbon fiber and in this naked bike, you can see the exposed belts and engine components, so that it is “simply beautiful and beautifully simple”. Unfortunately, it is a concept still and not in production… yet. It has Poggipolini’s design and R & D from their vast experience in F1 and MotoGP. Macchia Nera in Italian stands for “Black Spot.” The bike is really unique in its exposed look, nothing like what a custom bike should be or for the matter even a race bike should be and a lot of credit in the design of the bike goes to Italian designer Aldo Drudi who was called upon this project and the gentleman also happens to be Stefano’s good friend. This aggressive looking bike weights a paltry 135 kgs and the 998 engine develops a whooping 185bhp. 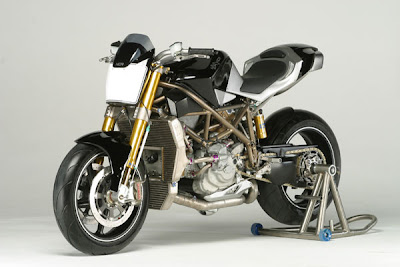 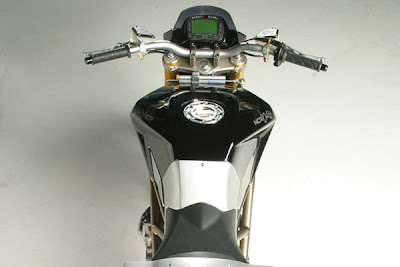 The machinery going to the 998 Testastretta engine includes titanium rods, tubing and fittings. The wheels are made of magnesium with Dunlop racing tyres of size 3x50 X 16.5 and 5x50 X 16.5 in the front and rear respectively. The frame uses Grade 9 titanium frame of 25/28/33 mm diameter and weighs just 4 kilograms! The braking system uses dual front discs ventilated Brambati Racing 305 mm with Brembo radial racing and aeronautical hoses. As for the suspension, it uses Ohlins racing fork and Ohlins racing shock absorber with spring titanium handlebar, chain and ring. Lots of racing gizmos are incorporated like ECU 6 electronic control unit, NTK oxygen sensor with automatic mapping, data acquisition capability up to 8MB for lap times, etc. It can control its water and oil temperature, it has electronically programmable sequential gearbox and a 3 programmable injection mapping. 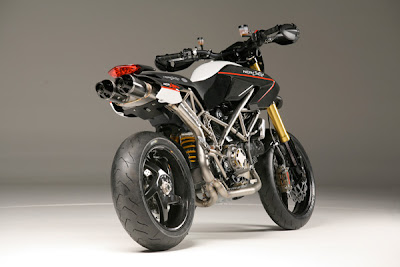 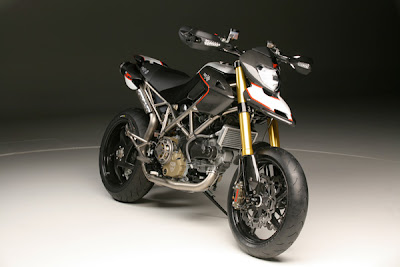 The only bike that is street legal is the LEGGERA. The LEGGERA is evidently from the Hypermotard which many believe is the ‘best bike’ to ride. So one of the world’s most practical bikes just got better. That is what you see. Underneath the beauty, NCR has applied all their racing experience to this bike and yet managed to keep it street legal. So, if you can read between the lines, the Hypermotard gets a shot of adrenaline not because it lacked anything, but because it would be more fun that way. Okay, coming from NCR, you know this ain’t gonna be cheap, so how much? Well, well, it will cost you the same amount at which you can buy 5 stock hypermotards! The LEGGERA will cost you a whooping $76,000 and more if you want. Why such a steep price? For starters, it comes from the house of NCR. Then you get a Grade 9 titanium main and sub frame weighing a total of 6.3 kg. The stock hypermotard (DS1100) is in itself a high performance bike with a stock output of 95 bhp and 102.9 Nm of power and torque respectively. But to even refine it further, NCR outsourced Ohlins to work on the suspension components to offer even more functional and adjustable components. Ohlins has used titanium nitride coated 46mm full adjustable forks with NCR Corse valving, adjustable offset triple clamps made in NCR Avionic aluminum for the front and for the rear there is NCR Corse billet fork bottoms monoshock, fully adjustable Including low and high speed circuits. Then the brakes you see are Brembo alright but even those are specially made for the LEGGERA, so the monoblock calipers you see are just not Brembo, they are specialized Brembo! 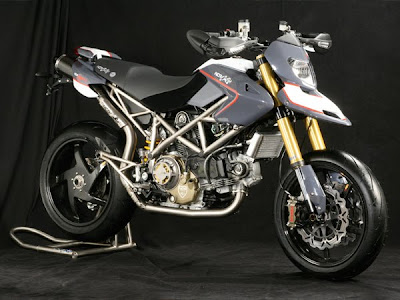 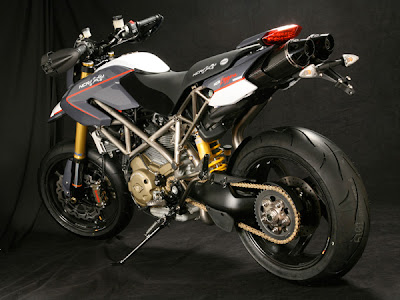 At the front, you get 2 x 300mm Braking WAVE rotors, radial monoblock Brembo Racing calipers with 4 pistons and 2 pads and the rear has a 200mm Braking WAVE rotor, Brembo 2 piston caliper. The carbon fiber wheels (3,50 "x17" front, 6 "x17" rear) are designed by BST to make it extra light. Other high grade components include NCR adjustable triple clamps produced from billet, fork bottoms, gas cap, rear sets and even titanium pegs and passengers peg holders. All these modifications and the overall weight of the bike is bought down from 180 kg to 157 kg. Add to that the robust engine and what do you get? According to the NCR website, “this attention to detail results in a street legal motorcycle that is hyperLIGHT, hyperFUN and hypercompetitive”. All these for $76,000. Now if you have more to spend, there is ample of scope. NCR can work their magic and bring down the weight further to only 137 kg. They will increase the engine power from 95 bhp to 125 bhp by boring out the 1100cc to 1160cc if you pay a little more. Or you can go for the 1200cc engine with the full NCR treatment with even more power at 132 bhp. A Ducati Hypermotard (read real high performance bike) with 25% weight reduction and more than 25% power gain and it is street legal. Then there is the exhaust system with catalytic converter and lambda systems. Exhaust is in titanium and the mufflers are in carbon. The 2x1x2 exhaust is built in titanium and the mufflers are built with carbon to bring the weight down of the exhaust system by 45%. So now, does the price for this hand crafted bike seem justified now? And then there is a race-only version with more inputs. So… there is never enough, right!
There are 4 more versions to come and we will continue by the next post. In the mean time, visit the NCR website and also take a look at the MACCHIA NERA and LEGGERA.