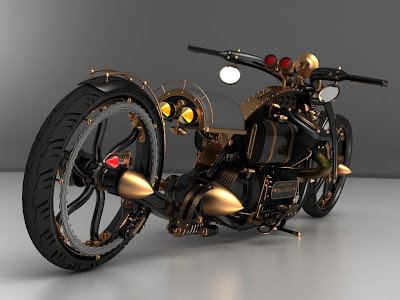 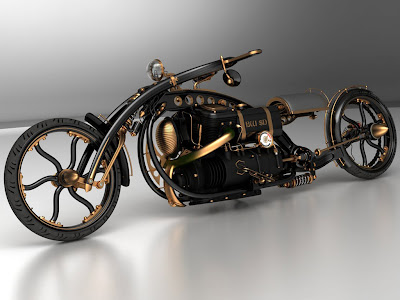 There is this gentleman by the name of Michael Smolvanov who can do some really amazing designs on 2 wheelers. And as is already evident from the pictures, you can jolly well make sure that ‘amazing’ here is really in a different plane altogether. His breath taking prototypes has often been much talked about over many forums and blogs and why not! Very sublimely, he translates his creations from motorcycles to work of art blurring between practicality and prototype. Michal Smolvanov is from Russia and goes by the pseudonym of Solif and he showcases his designs in his blog Solif Design
His designs are really unique, in a way that it is difficult to categorize it even as a ‘prototype’. For example, look at the ‘Black Widow Steam punk’, overall the model is so elegant in the matt finished black and golden colour. Look at the frame, like a few other recent custom designs, it doesn’t support the fuel tank at all, the swingarm is extra long to the fact that it will be probably a problem riding this bike even to show events. But then the vintage headlamp and accessories, the low stance, the un-describable single seat, everything is so drool worthy that even if it is just a prototype, you feel like getting one. The engine somewhat seems to be based on a boxer twin, but then it is just my guess, can not really make that out. Somewhere I read the designer describing the Black Widow as "frame, suspension and steering grown from organic substances," and to "destruct the organics and process the carbon of the frame, leaving a strong and lightweight structure”. It has something to do with being eco friendly but more than that, I am yet to assess what that means, I don’t even wanna try, but whatever it is, the final product is definitely something any bike collector would love to add to his collection. 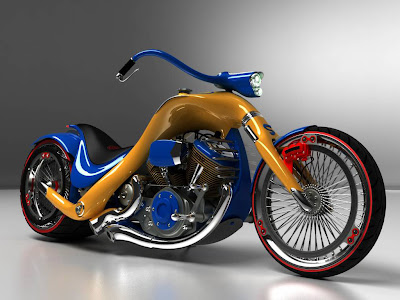 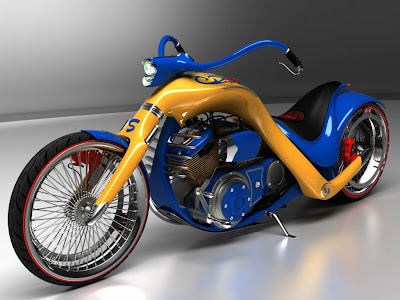 Then there is the ‘Styrr’, a name as radical as the prototype itself. Designed in blue and yellow, the first ‘styrr’iking thing you notice is the stance of the bike. It’s more curvy than Jennifer Lopez was at her prime with twists and bends at all the expected places and also where least expected. Okay, this is based on a V-Twin, that is evident, but hey! What’s that? No front forks! But wait, there is something shiny shiny besides the front swingarm. It may be that beneath the cycle styled front arms, there just might be the forks hidden. And to supplement them, those brakes (I am failing to recall the name and where I saw similar designs, please help me on that) on both the wheels. With that wide a rear tyre, I wonder if the bike really needs a side stand. It is weird, but looks fantastic. 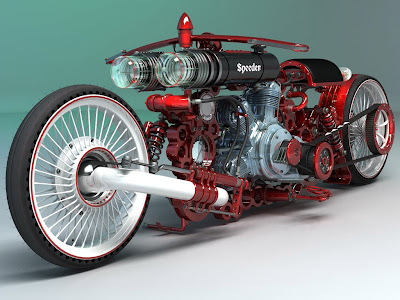 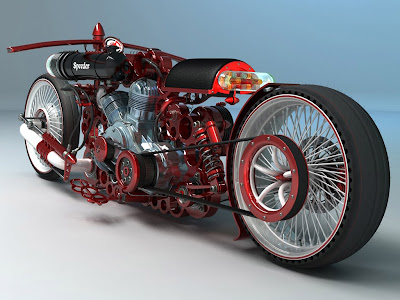 And then if you think you have seen it all, wait… here comes the hot stepper, the ‘Speeder Mechanicus’. Once you figure out whether it is going or coming (meaning the front from the rear), you will either love it or loathe it. Well I liked it. This is different to say the least. Okay, one thing ‘not good’ about the whole Solif thing is that there are absolutely no inputs or write up anywhere in the net. The blog also has no write ups. Not even in Russian. Absolutely no idea where or how the idea generated or how it came into being. So it is little difficult to guess what is inside the bike. Anyway, you can figure out that this has a W3 cylinder, similar to the Fueling. Anyway, why does the bike remind me of a locomotive engine, dunno, there is something very eerily similar. Maybe the elongated hub centred steering along with the belt drive, it reminds me of those connecting rods on the metal wheels. The bug eyed headlamps are extended from the supposedly tank and there are a lot of crimson red round metal objects connected to one another. Of course they are here for the visual effect, but tend to look beyond the visual glory, maybe this prototype has a futuristic producable stage of course with a lot of remodelling, but think about it, those glass item lights in the front and rear, those wonder years just might be back! 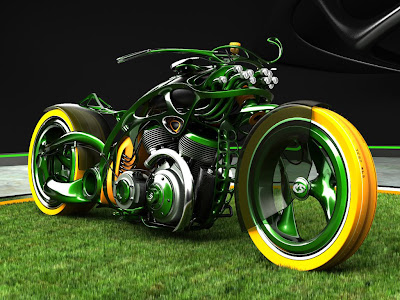 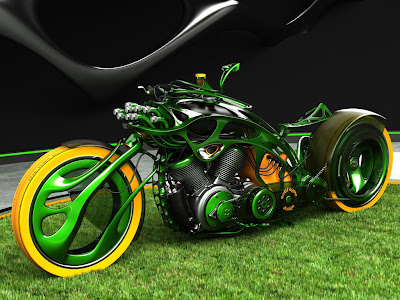 My favourite is the 'C-Org', a unique concept. This bike looks real close to being 'made-able'. I dont know how the forks will work, but otherwise, we have a generous looking V-Twin engine with an almost real tank, the handlebars doesn't look like they are out to kill your back and the seat is almost ready. Solif has been very radical in the use of colours and here too the green sticks out with the yellow tyres, but in a very good way. I probably would have dreaded the idea of riding a grenn bike as green as this (The Kwacks don't even come close!), but look at this bike, so stylish, you almost feel like streching out your leg over it and see what it can do. You might remeber the million dollar Chicara Prototypes, compared to that, this seems to be pretty tame. And of course, those oh! so gorgeous headlamps, I am sure they have been thought of as projector lights, it looks like those Hollywood films aliens with tentacles ending with eyes. You just might miss another unique feature of the bike. Try looking at the front mudguard! What did I tell you, this truly is a unique concept. 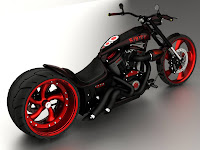 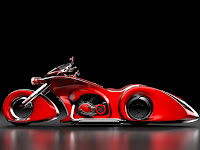 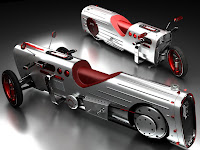 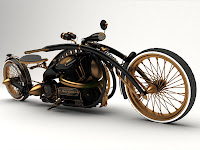 This guy is really a genius. At least I have never heard about Solif before. The world sometimes seems so big that so much talent really goes unnoticed. Check out his blog, he has lots to offer. The first bike above is the SapFire, then there is his latest creation, the Spirit of Design, which seems to have been inspired from the Victory Vision 8 Ball, which made a lot of news recently, the third one is Arx 3 Trike and he has Ark 1 & 2 motorcycles too. The last one is the Steampunk Version 1, from which the Black Widow is derieved. Visit his blog Solif Design to see some amazing designs on motorcycle and some cars too.