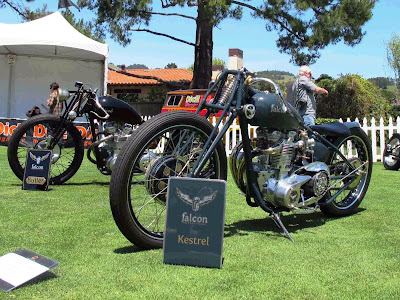 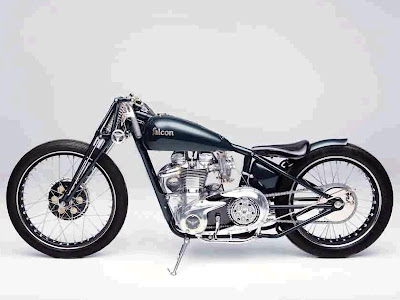 This came in the mail today written 'For immediate release'. The subject was 'Falcon Motorcycles' "Kestrel" Unveiled'. So, I am just copy pasting it as it came. Before you read on, for those who are still unaware of Falcon Motorcycles, Falcon is the brainchild of a couple, founders Mr. Ian Barry and Ms. Amaryliis Knight and what they do is get any piece of a obsolete British motorcyle and build it on that. To understand what I am saying, you may visit the Falcon Motorcycles 'What Makes A Falcon' page or read a previous post on this blog. Anyway, below is the letter and of course will do a full article on the bike once details starts coming in. For the record, today's post from Bike Exif features The Kestrel.

THE KESTREL IS UNVEILED
Is Falcon Motorcycles redefining the custom motorcycle?

Falcon Motorcycles’ Ian Barry and Amaryllis Knight unveiled the Kestrel Falcon at the Quail Motorcycle Gathering on Saturday, May 8, in Carmel, California, where it won the award for Best Custom Motorcycle. The Kestrel made it's début and is photographed in current "racing trim" (no head light, tail light or license plate – to be added later), ready to be raced at El Mirage, California, at the end of May. The Kestrel Falcon is Ian Barry’s final bow to a decade of building custom Triumph twins. The 'heart' of the Kestrel started as an engine with a damaged gearbox from a 1970 Triumph Bonneville. Ian cut the unit-engine in half, remove its damaged gearbox and completely re-engineered to fit and function perfectly with a BSA A-10 transmission. The engine was then carefully reshaped with new contours and aluminum-welded together to various pieces of his new design, using a jig that he made for the engine case. Apart from ten inches of the original headstock and down tube, the frame was built from high-tensile steel tubing and lugged together with solid aircraft-quality steel ingots, machined in house.
Another custom made cast iron and aluminum jig was designed and made in-house to assure safe geometry and perfect alignment. Apart from a few of the original castings, the girder front forks were also designed and built from scratch in-house and matched to fit a heavily modified and reshaped Triumph hub.

Overall, more than 2,000 hours of hand-machining, stretching, hammering, rolling and hand-carving to create the rest of the motorcycle. The gas and oil tanks started as hammered sheets of metal hand-formed around wooden molds, the exhausts, handlebars, levers, seat, fender...even the bolts were created from scratch from blocks, sheets and rods of steel, brass and aluminum.The 750cc twin cylinders were designed to taper the round fins at the bottom to the original Triumph diamond-shaped heads, and was machined in-house using a 5-axis CNC machine and a solid block of 7000-series aircraft-grade aluminum. Form and function being mutually exclusive has been a long running argument in the custom building world. Die-hard riders often scoff at the idea of a custom build because of a deep seated understanding of the road, a need for practicality and the understandable concern that custom built motorcycles are not built for either.
Ian has never seen motorcycles as a mere form of transportation. While he has gone many years of his life with a motorcycle as his only form of transport, and he has refused to build bikes for people who he felt weren't going to appreciate them or ride them, his underlying belief is that motorcycles are about the experience and not just a way to get from A to B. "It would be great if everybody who loves motorcycles were able to build their own expressions of what the ultimate Triumph, Velocette or Norton could have been if the limiting factors of the industrial revolution hadn't constrained design and possibility" says Ian. "They use them to go off for a solo ride on weekends or in the evenings, a way to escape the mundane, the current fads and fashions, the plastic cookie cutter world we often live in, and experience the road in a way that was made for them, and that nobody else will be able to -with guts, speed, reliability, and a personal, unique but timeless style." While Falcon Motorcycles are not intended as touring bikes, the function and engineering of the motorcycle is definitely Ian's primary focus when building his motorcycles, which have been likened to works of art, due to their high levels of craftsmanship. "In my eyes, there's no point in building a motorcycle that is purely an art piece. Unless it functions safely and handles beautifully, I wont let it leave my shop. The biggest challenge, and the thing that ultimately drives me is assuring reliability and safe engineering while figuring out new ways to engineer flowing, classic lines that draw attention from the pure functionality of the bike. It's not easy to do, and often a lot of ideas have to be flushed out before getting to the point where form and function actually do meet. I am really lucky to have customers that truly love motorcycles, and are willing to pay what people with money would normally pay for a collector's painting or a sculpture for one of my motorcycles. I'd never be able to this otherwise. As somebody who's been obsessed with motorcycles my whole life, it's an incredible subject to be able to really delve into and explore. Production bikes have to be produced by shaving cents off the dollar wherever possible, and it means that the purest aesthetic of the motorcycle, or of what it could be, will most likely never be discovered. I design my bikes around engines I've always loved, and try to make the motorcycle into the purest design it could be, without having to compromise for any reason." It's the art of the motorcycle, but it's still a motorcycle.The Kestrel is the second in a collection of ten custom motorcycles known as “Concept 10,” using legendary British engines. The first, the Bullet, was awarded Best Custom Motorcycle at the 2008 Legend of the Motorcycle Concours by Jesse James, and was commissioned by skateboarder/actor Jason Lee. All engines Falcon used will be salvaged – no functioning bike will ever be dismembered. To become a Falcon, the essence of these classic bikes will be distilled and filtered through the Falcon aesthetic.
Their next motorcycle, the Black Falcon, is underway and is based on a 1951 Vincent Black Shadow power plant. It is expected to début in raw metal (before being painted) at the Quail Motorsports Gathering in August.