Fastest Man on Earth with the Curtiss V8 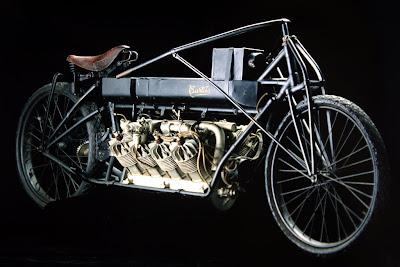 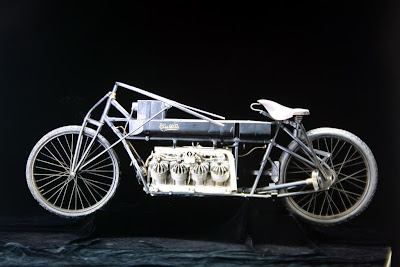 The name ‘Curtiss’ somewhat vaguely interprets in my mind as something to do with aeroplanes and something of having a tussle or an association with the Wright Brothers for some issues I can’t recall what I might have read years ago. Well, hence forth from now on, at certain age of my life, even if I forget the name of the Wright brothers, I will not forget the name of ‘Curtiss’. Of course I never knew that he was also given the name of “The Fastest Man on Earth”.
So, Glenn Hammond Curtiss was a pioneer in aeronautics and we will get to a brief history about that, but before venturing into aeronautics, Glenn H. Curtiss began his career by working with motorcycles. In fact, it was due to his innovative ways in creating motorcycles, light and powerful due to which his expertise was sought in the field of aeronautics. But the reason this man is featured here is because in the field of aeronautics, he had built a light and powerful V8 engine and later he converted the engine to a motorcycle engine. And we know which age we are talking about if we are taking about the Wright Brothers, right!. Yes, that was the 1900s. Think about it, a V8 in early 19th century. Exactly, Mr. Glenn H. Curtiss built a Boss Hoss in 1906.
The engine was there, so basically Curtiss and his team needed a chassis to holster the massive powerplant. They ultimately built a product that weighed 275 pounds and, was almost 8 feet long. Curtiss took the motorcycle to the Florida Speed Carnival in 1907 and recorded a speed of 136.3 mph (218 kmph, yes, in 1907) which gave him the title of ‘The Fastest Man on Earth’. And mark this, the record stood for any, repeat any land speed record and not just for 2 wheelers. The black and white pictures with the man are from that speed run and that was also the man’s attire. A gentleman wearing a leather cap and a trimmed moustache could do that, well I could have never imagined or believed had I not read about that. It was January 24, 1907 to be precise at the Ormond Beach (now called Daytona Beach) in Florida when the record was set and it was after 11 years another land speed vehicle broke the record and 23 years till another 2 wheeler broke the record. 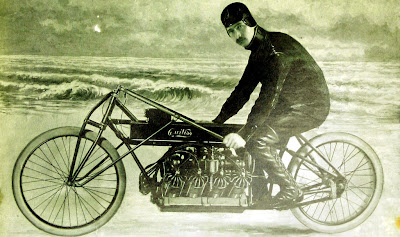 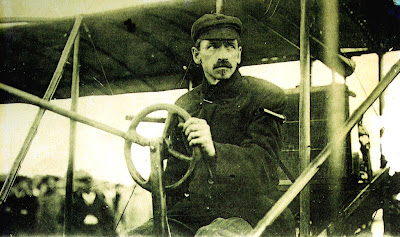 Before getting on the bike, a little history to know the man. Glenn Hammond Curtiss was born in Hammondsport, New York in 1878 and even in his teens he was quite the boy with his restless spirit and his ability to work with any mechanical item. His genetics for speed was evident from the fact that he was a champion bicycle racer. By the time he was 24, he already had his own motorcycle company by the name of ‘Hercules’. There was a gentleman by the name of Thomas Scott Baldwin who was a famed balloonist and he asked young Curtiss to make a V-Twin engine to fly a very light plane. The engine was ofcourse a success and shortly in 1904, using the same engine, California Arrow became the first successful American dirigible. And thus, Curtiss came into the field of aeronautics and was introduced to a club by the name of Aerial Experiment Association, a club whose another member goes by the name of Alexander Graham Bell.
As I started reading Curtiss biography, I was curious to know why the name of the Wright brothers crossed my mind whenever the name Curtiss went through my mind. And so it was, there was a link. The Wright Brothers had by the time already had a successful stint in ‘controlled’ flight, but was done in secrecy and although people were assuming, there was no media coverage. They wanted to refine the vehicle as far as possible. The Aerial Experiment Association (A.E.A) had their first public stint of flying before the Wright Brothers. On March 12, 1908, Casey Baldwin of A.E.A flew for 20 seconds covering a distance of 318 feet before it crashed a wing and later in May, Curtiss covered or rather flew a distance of 1017 feet in ‘controlled’ flight. What the A.E.A did to the plane that Casey Baldwin flew was add horizontal rudders to the wingtips Later Curtiss made several ‘first’ records including flying a world distance record of 24.7 miles. In fact he was the first man to fly the first officially-recognized, pre-announced and publicly-observed flight in America and also earn the unofficial title of America's foremost aviation pioneer. In 1910, Curtiss flew from Albany to New York that gave him world wide recognization and was also the first to make use of the aeroplane as more than a luxury time pass activity when he introduced it as a possible war machine and a practical passenger carrier. But planes and motorcycles were ot his only passion, in fact as mentioned, anything mechanical and with speed inspired him and he pioneered in the design of seaplanes and flying boats too. Later in his life, he became a land developer and developed Miami so much that he was awarded a honorary doctoral degree for his contributions to the development of the Miami area. He died at the young age of 52 due to complications resulting from an appendix surgery. It would take an entire post just to cover the list of accolades he gathered during his life. Please check the links below to know about the great man’s varied inventions and contributions. 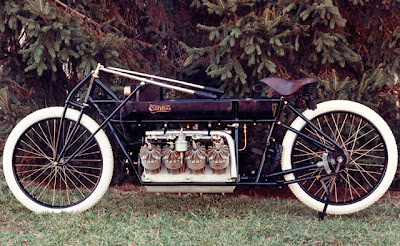 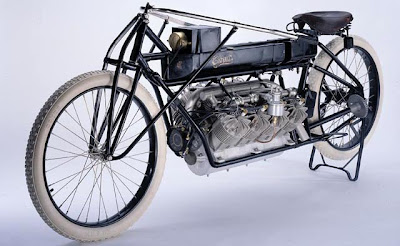 Source of 2nd photo - National Air and Space Musuem
Yes, Curtiss became famous for his contribution to aeronautics, but it was motorcycles that bought him into the spotlight. In 1901, he began motorizing bicycles with his own single cylinder internal combustion engines. In 1903 he became the first official American motorcycle champion. By 1905, he set the world speed records for one, two and three mile events. That handlebar twist grip we call it as throttle and which we really really like to twist and God knows what a certain Rossi would have done without it, well, we need to give credit to young Mr. Curtiss for advancements like this. Curtiss also developed a triple cylinder engine designated the W-3 which was basically a V-twin but with a third cylinder which Curtiss designed again to proclaim himself as the producer of the fastest production motorcycle in the world. Before he made his mark on the fateful day in 1907, young Curtiss have been designing single, V-Twins and in-line fours. For the monstrous V8, the configuration was made at 3.25 x 3.25 inch bore x stroke that displaced 269 cubic inches equivalent to 4000cc. His earlier V-twins had 50 degree angkes but as you can see the V8 has a 90 degree design utilizing cast iron F-type heads. The engine was supposed to have power output figures of 36 – 40 hp @ 1800 rpm (Imagine the torque figures!). Inside the monster, doing duty was a solid billet steel crank and a dry sump handled the internal lubrication. The inlet valves were activated by atmospheric pressure while pushrods actuated the exhaust valves. The engine was fed by twin carbs which were designed by Curtiss himself. Look at the handlebars and you will notice that the throttle cables were hidden inside the handlebars. Custom designing started by Curtiss then, eh? Very interestingly, the electrical system was energized by dry cell batteries. Considering the size of the engine, it was superb engineering to finish the bike within the 275 pounds mark. The bike with that massive engine settled for a 64-inch wheelbase. The bike was shaft driven as a conventional chain-and-belt transmission would not have been able to handle the power of the Curtiss V8, there was no clutch and so just one tall gear. So you just keep twisting the throttle! At the beach, the four mile course was broken into 3 parts, the first 2 miles were building up the speed, the next mile was recording the timings and the last mile for slowing down. Of course, what did you expect, there were no brakes, so one mile just to slow down and stop. 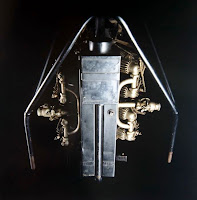 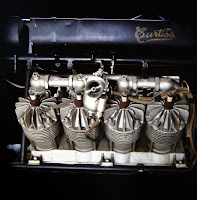 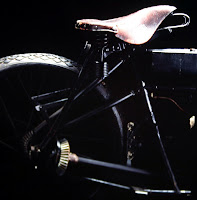 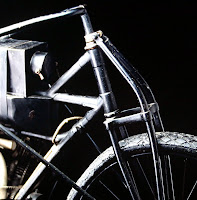 I wonder what it sounded like! And yes, it took two well built guys with Curtiss sitting on the bike to start off the machine. The seat was mounted behind the engine so as not to burn the rider and so extra long handlebars were used so the while steering, the hands wouldn’t be near the hot engine. Thinking about the stance with these dimensions, you can vouch that it must have been an arduous task riding the monster. And think about what the body went through since in the name of suspension, all it had were springs located beneath the seat just like a regular bicycle. Anyway, during the run, he also established a record of covering 1 mile in 26 2/5 seconds. Actually it was recorded by several persons on the beach that the bike covered the marked mile within that specified time and it was calculated that to cover that distance at the said time, the bike must have run at a speed of 136.3 mph. And after all this, the record was considered ‘unofficial’. Yes! It still is an unofficial record. Why? Actually, the bike cracked the timings as mentioned and it was recorded but ‘officials’ didn’t record it. It was a test run recorded by many non-officials. So there was no doubts that the bike had actually clocked 136.3 mph but as I said, ‘officials’ didn’t record it. So why didn’t Curtiss drive it for the second time? Well, he couldn’t, the bike started falling apart as it was slowing down to 90 mph. And he was not the man who would again build the same thing. That was not just exciting enough. But the following month in February, a journal by the name of Scientific American did mention the whole incident and also mentioned why the record was considered ‘unofficial’.
And so where is the original real deal, the big poppa? Well, as it is, with lots of parts missing, it is the main attraction at the Smithsonian Steven F. Udvar-Hazy Center located adjacent to the Dulles International Airport in Chantilly, VA. A replica of the original ‘bolt for bolt’ was built by Mercury Aircraft Company and is on display at the Curtiss Museum. The Curtiss Museum is located at Hammondsport, New York and incidentally, the H in Mr. G. H. Curtiss standing for Hammond is a short form of Hammondsport. The museum features all the contributions that Mr. Glenn Hammond Curtiss made to our wonderful world, from bicycles to motorcycles to aircrafts and all. For a boy raised in near poverty and after having lost his parents at a young age and also dropping out of school at 8th standard to getting a doctoral degree and a museum created to honour the name, this is surely a Hollywood blockbuster movie storyline.
Source of info and photos Glenn Curtiss Museum, Wikipedia, Motorcycle dot com, Smithsonian Center.