There are legends and then there are legends. Some become legends and some are born legends. Born legend? Yes, born legend. The moment they arrived, they became the pedestal. Kawasaki Z1… Yamaha RD350… and then there is the Honda VFR750 a.k.a the hallowed RC30. These are bikes where even the tag of legend doesn’t seem to do justice because they were more than that, they defined technology, they defined a revolution, they defined a generation, they became instant classics. And the Honda RC30… well it seems it is just a step ahead of all these.
Before we start off, just for the record, the RC30 was the first race-replica that was also a real racer for the World Superbike series.
Looking at the bike, you realize that a race bike just can’t be more minimal than this, the bike is well… just a race bike, there are no aahs and oohs, but yet you cannot keep your eyes off because you know somehow that once this thing starts there is a whole new world out there. There is this uncompromising look that is telling you ‘Try me… I dare you’ and you know this bike is not going to be easy to master. And the bike is just that. Too refined, too much power and too much talent to be tamed. Again just for the record, it won the World Superbike championship in its first two years and the SBK series was not the only ground for this raw talent, it was a master in endurance and TT racers as well. Yes endurance too. 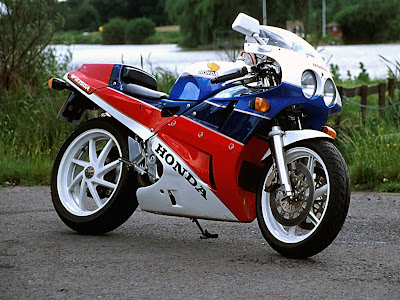 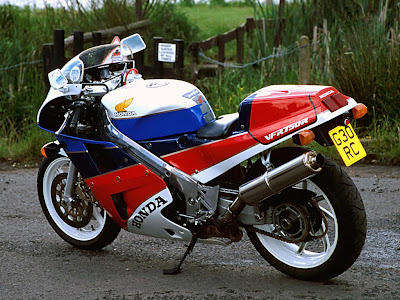 Because the bike was based on Honda's successful RVF superbike and endurance racer. The engine earned accolades for Honda when Fred Merkel won two WSB titles in 1988 and 1989 and Carl Fogarty won the F1 Championship. In 1988 Steve Hislop riding the RVF on the Isle of Mann TT broke the Production class record by 15 seconds and then again a year later Hislop set the first sub-20 minute, 120mph plus lap. And at the same TT, same week, Brian Morrison and Carl Fogarty also rode the RC30 at 120mph-plus laps. The same year, fifteen of the twenty five finishers in the F1 class were RC30s. In 1990, Hilsop bettered the lap record to 122.63mph and again to 124.4mph in 1991 and that record stood till 1999 when Jim Moodie broke it on a (guess what, what else! but a) RC45In 1987, only 1000 were released into the Japanese market. Then in 1990 about 300 RC30s were assembled for the U.S. market fitted with air pollution controls and the RC30 designation on the tail. And the last one hundred RC30 machines were made for England also in 1990. In between there were also some models made for Australia. Well, looks apart, it doesn’t take an Einstein to realize that the bike is all about the engine. Those who has ridden and tested it says that it can absolutely pull off just from anywhere. The revmeter is just a farce, actually no, once it hits 7000, it is like Clark Kent has just taken off his shirt and the next thing you see is Superman. It will pull you like that is the only thing it knows until you hit 11000. And then it is just bliss. Bliss is not always what you may like because at that rpm you are scared at what the bike is doing and the excitement inside that tells you there is more to come. 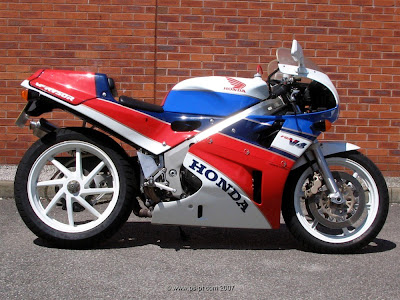 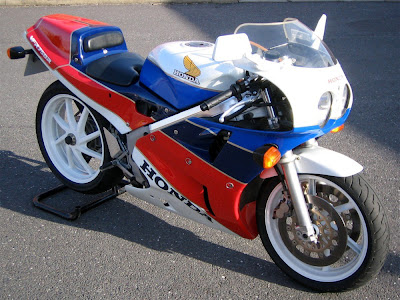 The original engine was liquid cooled, a Honda 90° V4, displacing 748cc through its 16-valve double overhead camshaft producing 86 bhp with later versions in US and UK making upto 112 bhp. The original racers were with 90 bhp, but the street bikes were limited were restricted to 77bhp @ 95000 rpm. But then you know, with a little play, modify the exhaust and airbox, re-jet the carbs (Oh! the beauty of having carbs in place of today’s new age FIs), you can get your secret demons out. If you think that was not enough power for a racing bike, you might be right but then there were quite a few additions. These included titanium connecting rods and gear driven camshafts which act as an addictive to the overall performance. The street version, Honda VFR750R was homologated into RC30 for the World Superbike championship by Honda Racing Corporation (HRC). For those uninformed, for any bike to participate in SBK series, it has to be a production bike with atleast 300 bikes produced which could be bought over the counter, not like the Moto GP bikes where it is ‘the’ bike. The RC30 engine firing configuration was very different from the VFR750F although it was derived from it. It had a 360 'big bang' degree crank arrangement instead of the smoother 180 degree doing duty on the VFR. This particular configuration produced a very broad spread of power and the RC30 also had a very close ratio gearbox with an unbelievable high first gear ratio (0 - 82mph). Actually it was always about the RC30’s engine. The titanium connecting rods besides reducing weight also reduced reciprocating weight and therefore vibration and as such the RC30 is one of the smoothest V4s. The four carburetors are high-flowing using constant velocity huge 38mm Keihins CVs. Take a look at the video and hear the sound of the V4. It is unlike anything you have heard and that is due to the 360 degree crank. It is said, if you just start the bike, keep it idle for a few seconds and run it through the gears, you get a full symphony. There simply is no other bike that can imitate the RC30's combination of four into two into one exhaust system paired with a 360 degree crankshaft.

The bike weighed 192 kgs. The engine was basically based on the VFR750F (RC24) and also almost looked similar outside barring the side covers. Inside, it was totally different, the clutch, gearbox, crankshaft, oil pump, connecting rods, water pump, pistons, starter clutch, the valvetrain and cylinder heads were new. All these also increased the redline to 12500 rpm from the VFR750F’s 11000 rpm. The bike had a top speed of 240 kmph.The light brakes of the RC30 are often talked about. The wheel and brake pads had quick-release mountings and the bike was supported by fully adjustable Showa suspensions which gave the bike superior ride and handling characteristics. The rear wheel had a brake disc on the inside and a chain sprocket on the outside of the single-sided swingarm. The bike had a low centre of gravity which aided its handling. To further improve handling, the bike had its rear caliper linked to the frame via a ‘rose-jointed linkage’ through the swingarm which was done to reduce the rear wheel from hopping under braking. This was the ‘anti-squat’ rear brake linkage. The exhaust was a full stainless steel 4-2-1 exhaust system and an alloy tank. Oh yes, the RC30 were hand built by the HRC team. It will seduce you with its smooth yet raw power and absolute delight handling. Its power delivery is so Honda, linear and so precise that the rider feels like it is linked to his/ her brain. 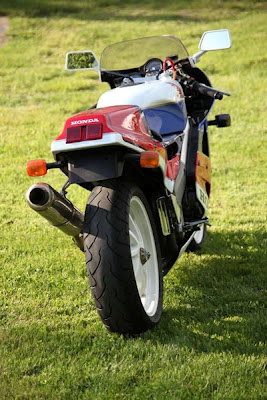 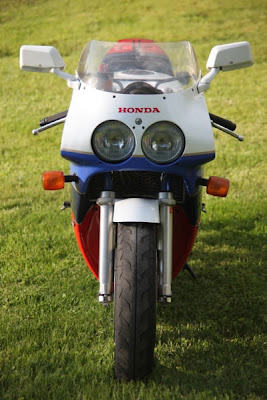 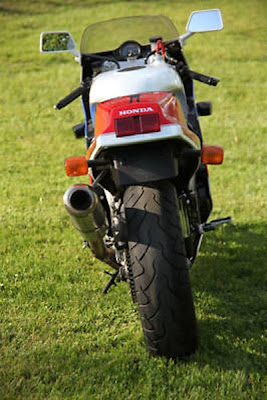 So how did the RC30 came into being? Well, according to rumours, tired of hearing that Honda makes people’s bike but utilarian bikes compared to what Yamaha and Kawasaki was making, Sochiro Honda wanted to show the world what his factory was capable of. He wanted to show that even if it comes to any arena, Honda can make the best knights. But then rumour also has it that Sochiro knew that the SBK was the next thing for marketing and the RC30 was the right tool. Whatever it was, the world had never seen anything like it. Hondas were of course making some V4s before the RC30, but with this they got the ingredients right. The single sided swinging arm and the rear wheel came from the RVF750 endurance. But there were a lot of things the RC30 carried from its racing heritage which were not exactly street friendly. Pistons and valves were tight so seizures were common. The brakes were extremely light for a street machine. But basically it was meant for racing. The compact head design allowed for straighter, better-flowing ports. Lots of the features of the RC30 are more akin to a MotoGP bike like the short wheelbase of 55.5 inches. The foot pegs are high up and back. The handlebars are genuine low clip-ons. The rider sits at the front due to the short gas tank. The seat looks thin but supposed to be rather comfortable for a racing bike and the overall riding posture is also supposed to be ‘roomy’, you know free elbow movements and all which means besides being a race bike, the bike is also capable of providing a decent city ride and some amount of highway ride although the two big radiators with the heat emitting from it will ensure that you don’t get too comfortable on it. After all, the bike is meant for race tracks. 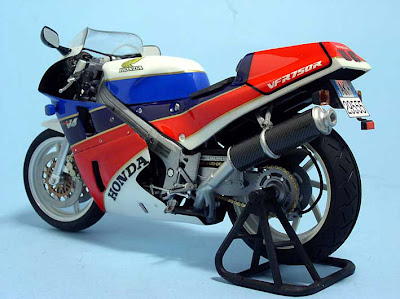 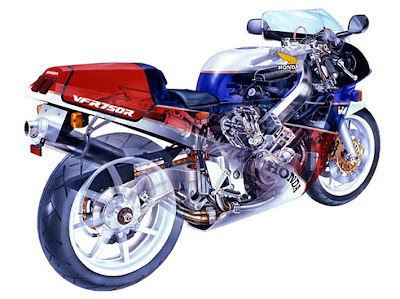 Actually it has always been like this. While the RD350 scares you like a maniac and the Z1 gives you goose bumps with its raw power, the VFR750 will excite you, intimidate you and fascinate you by the sweet mill. Of course while the Z1 and RD350 are street bikes with racing stripes, the RC30 is a race bike derived from a steer bike and as such it doesn’t try to hide that fact. Which means while the RD350 and Z1 will prepare a racer from you, you have to be a racer to master the RC30 to enjoy the bike at its fullest.
The RC30 was described at the best motorcycle ever coming out of the fab Japanese four dungeons. Of course, the RC30 was never easy to own. Imagine a Japanese 750cc bike costing above $10,000 two decades ago, but you know what went inside it, titanium connecting rods, hand built and all, so it was worth it. It is not just exclusive, the Honda RC30 is more than a classic, it is a true legend in every way, a dream bike and although it is very very difficult to get, those who have it know that they are in the A-List. If it is not as prominent as the RD350 or Z1, say it didn’t make the cult status that the Yamaha and Kawasaki enjoys, it is again because it is a Honda. People never realized that Honda can make something so capable and the fault for that image probably also goes to Honda, so by the time it started creating records and wins and by the time people got to know the RC30, it had already left the building! The word legend is very frequently used now a days to describe classic bikes, so if the RC30 needs to be given an appropriate adjective, it has to be legend among legends. Recently, there was a RC30 on sale on ebay, an exotic looking one (aren’t they all?) which has clocked around 15000 miles. The auction is over but I think it is still with the seller. He is asking $25000 for it, quite a deal. Check it out, it might be still there.