The VR6 from HOREX 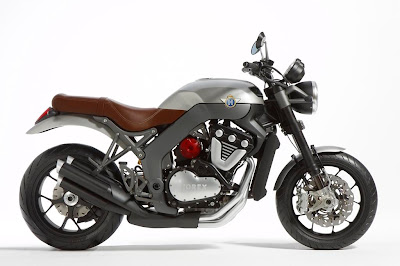 Whenever we talk about German motorcycles, we only think about BMW. Well that shows the dominance of the company and also that they are the only existing worldwide German motorcycle company. If you try hard, the names of Adler, DKW, Munch, MZ and a few others will crop up. In all probably there were over 300 small and big manufacturers from Germany and about 90% of them are extinct now. Recently a firm by the name of Horex has made some news with their new roadster and something tells me that this is the start of something big. Horex will showcase their new motorcycle, the VR6 in the Colonge Intermot this week that is to be held from today (6th to 10th October). Horex is a small company from Garching but with some real big plans with their new 6 cylinder roadster.
So far, the reborn German marque has introduced only 2 complete motorcycles and it is very much in the lines of the prototypes that were showcased in Munich, Germany this June. One of them develops a very healthy 160 bhp from its naturally aspirated engine and so you can guess how much the other, that is, the supercharged version will get to! An incredible 230 bhp from a non GP non racing roadster bike! Now that is something to surely raise many an eyebrows. They would also show their new VR6 machine inside out, that is in the raw form, dissected. 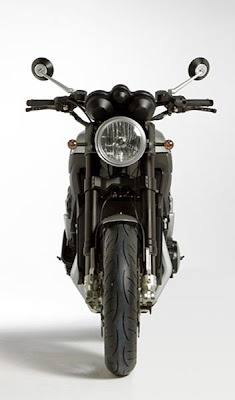 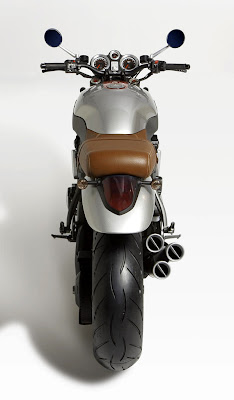 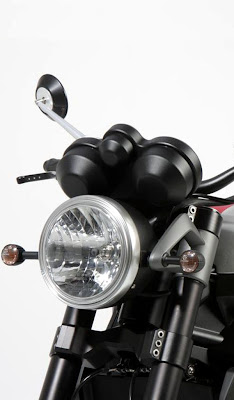 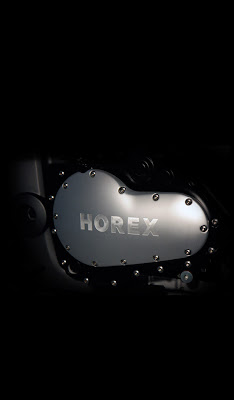 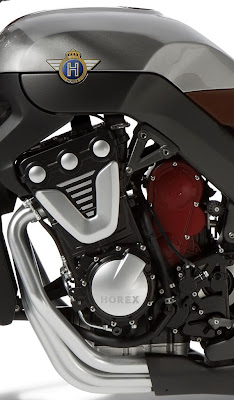 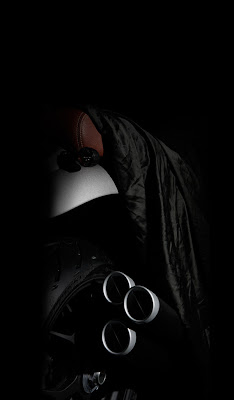 The six cylinder engine encompasses 1218cc, but what is unique for the engine is the layout as evident from the pictures below. It is neither an inline nor a V, but kind of a mixture of both. It is the VR engine. The engine has a 15-degree angle between the two rows of three cylinders, which share the same cylinder block and cylinder head which work in three parallel arranged camshafts for three valves per cylinder. This makes it narrower and shorter than a regular V6. Of course the benefits are many but I presume the biggest benefit is that you can have the refinement of a 6 cylinder engine even on a smaller bike like this roadster and it doesn’t have to be a Goldwing.
All credit for the incredibly beautiful and new motorcycle needs to go to Clemens Neese and his team. Mr. Nesse is an IT guy (he completely looks the part) with not much of a background in motorcycles. But it is his passion for motorcycles and being a realist helped. He had a vision, but he didn’t have money. In 2004, when he visualized about this new project, he knew to make a mark in the fiercely competitive world, he will need an USP if his model has to stand above or even stand out. By 2005, he got his team together consisting of his close friends, Frank Fischer and Fritz Rombach and they started working from the bottom of the pyramid. The soul of the pyramid is of course the unique engine layout, referred as the "VR engine" and in 2007, patented it. VR engines follow a design principle in which the number of engines (four or more) cylinders are in two rows in a manner as mentioned above. In this VR6, each cylinder head has two intake valves and a single exhaust valve, all operated by the three parallel camshafts.

Anyway, soon he found other believers and there were financiers willing to sponsor the project. A private investor bank from Germany, KfW SME Bank and even the Federal Ministry of Economics and Technology were willing to bet on its success. In 2009, he bought the rights for the brand name Horex. 6 years in the making and now we have a brand new German bike. The engine was developed with the help of the engineers from the University of Munich and with the technical assistance from Volkswagen who also make the VR, rather the VW engine. But as such, the engine was developed from the ground up and theoretically, only the basic principle of the new Horex engine is comparable to the Volkswagen. Rolls Royce is also mentioned as a partner.
We will get to the Horex brand in a short while. So is it just the name or are there similarities with the original brand? Nesse plans were to design the new bike like the original Horex machines such as the Regina or the Emperor, but of course with a modern yet retro touch. The original Horex motorcycles had clean lines, high quality and German engineering and all of these traits are there on the new Horex. Clean lines and retro styling meant no plastics or aerodynamic shields which also meant that the engine outline have to be borne from a designer point of view. And what a beauty it has turned out to be. Look at the images and you will be drawn to the engine. You will notice that there is an aluminum bridge frame that surrounds the engine and you can see the six exhaust headers flow from the engine leading to three silencers all on the same side. The VR6 engine is liquid cooled and it has a six-speed transmission with a belt drive transferring power to the rear wheel.
Front forks, as evident are upside-down with 50 mm tubes and 130 mm of spring travel. At the rear is a single-sided swingarm with damping handled by a central spring strut. The double-disc front brakes are fitted with radial four-piston calipers while the single-disc rear uses a two-piston caliper brake. 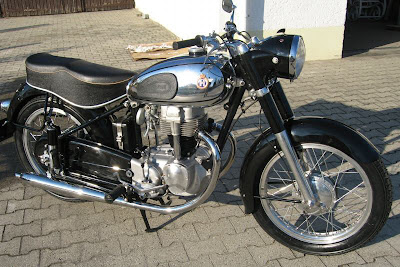 The Regina & the Imperator
A little history of the Horex Company. Horex was founded in 1923 by the Rex Glassware Company. Since it was in Hombarg, the name was fused as HoRex. Initially, Horex started out building motorcycles with Columbus four-stroke engines from Oberursel and within 2 years, both companies merged keeping the Horex brand name. These 4S engines were all single cylinder engines with cubic capacity ranging 250 to 600 cc. In the mid thirties, 2 chain driven over head cam parallel twins of 600 and 800 cc were manufactured. After WWII, Horex resumed business with a 350cc single cylinder model, the Regina (SB 35). Regina became the most successful model for horex and most of the existing Horex motorcycles are from the Regina series albeit different engine sizes. Other successful models included a 30 bhp 500 cc OHC parallel twin called the Imperator and of course the Emperor. The Regina came out in 1948 and in 1955, it was replaced by the Resident. In 1960, Daimler-Benz took over the company and motorcycle production was halted permanently. Overall all the Horex models were known for their pace as they were supposedly quite fast with high initial torque and of course the engineering too.
The new VR6 models will be priced upwards of €20,000 (about £17,400/ $27,700). The new Horex will come standard with ABS. The models would be available in Germany, Austria and Switzerland by next year, Horex plans an international release. Yes, we are all awaiting for its first ride and road tests but until then you cannot even hear the engine because Horex doesn’t plan it to even start the engine during the show but Nesse says it sounds real sweet. Fingers crossed!
Visit the official HOREX website for all theinformation as to how the design came into being, what goes inside the motor and all other details. There are also loads of desktop images of huge sizes. Photo source of new VR6 courtesy the official Horex website. Photo source of classic Horex motorcycles: Classic Motorbikes. Also visit the biggest Horex club online on this link for loads of information and whole lots of owner’s photos.