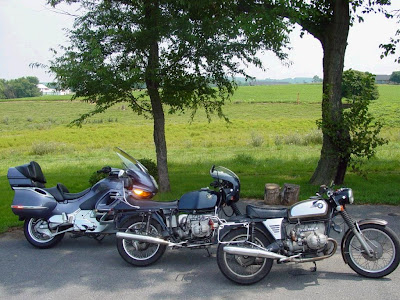 I usually read all emails I receive but sometimes there are a tad too many and I miss a few which I make it a point to read later because some of the mails are from people who know a thing or two about bikes and have a better understanding of bike related histories. I do not know how I missed this mail and my due apologies as it should have been in the blog a long time earlier, particularly because the gentleman has rectified or corrected some information I have given out.
Mr. Greg Shamieh actually wrote to me on April 27 regarding a post on the BMW Airheads.

Nice to see you providing some coverage to the classic airhead BMW motorcycles. As the picture above indicates, I know a little about them…those are my three bikes… the /5 in the foreground was my daily transport from 1980 to 1995…it has 170,000 miles on it – 150,000 of which I put on it. I am also a sometime moto-writer with some ‘Motorcyclist’ and web feature bylines to my credit.
Enthusiastic though you may be, your article is riddled with opinions masquerading as facts, several of which are demonstrably incorrect.
“No more shaft drives and no more bone crunching kick starts.” – sorry, but wrong on both point. Shaft drive continued to be a BMW requirement up until the rotax engine singles in the F650 series. (Yes, the shaft drive was definitely an oversight on my part).
Your analysis of both the long wheelbase and toaster tanks are both completely off base. The lengthening of the wheelbase was not a US only change … it was caused because with worn tires the bikes demonstrated some marked instability that was killing off potential customers. people with surviving SWB models know to keep the tires, wheel bearings and steering head adjustments well tended to …or else! And the toaster tank, far from being an enlongated touring tank, is actually marginally shorter and much smaller fuel capacity – 5 gal compared to 6.5 for the regular’ kneepad’ tank - making it utterly useless in a touring context. The whole ‘toaster’ exercise was a one year only, US only styling experiment that at least at the time, was a miserable, commercial failure. Some of these tanks did end up on other bikes, either through parts swapping or the aftermarket, but it is only in retrospect that these bikes have become desirable.

Thank You Greg, I am also posting a P.S to the original post so that future readers do get the actual picture. And yes, I am an enthusiast and I have stated before that I get the information from books and net and of course some assumptions. Whenever I do get corrective emails, I post them. It is just that (particularly for me) and I am just giving an example here, I prefer ‘Would you mind going out of the room?’ to ‘Get Out’.