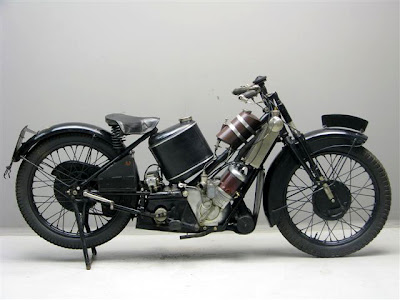 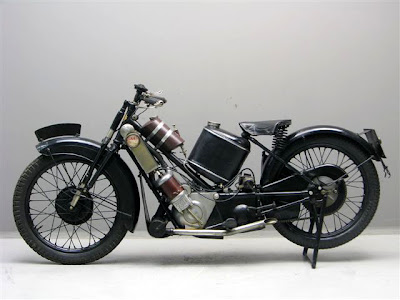 Photo Credit: Yesterday's (Netherland) Antique Motorcycle
Can you imagine association between two different entities, as different as 1920s and Liquid cooling.? Actually to get you started, you should! Yes, a liquid cooled motorcycle that was there in 1920s. What you are looking here at is the Scott Super Squirrel. For starters, the Scott Super Squirrel, made in UK, has a 596cc liquid cooled two-stroke vertical twin engine. Transmission is via a two-speed foot shifter. Just for the above facts, it is a pretty impressive motorcycling legend by itself. This was one of the most technologically advanced machines of its day in 1924 when it had liquid cooling, telescopic forks and a 2 stroke motor where as almost all other motorcycles relied on heavy air-cooled four-stroke engines and solid forks. But that is not all, in fact when Alfred Angas Scott built the first motorcycle in 1908, that too was water cooled 2 stroke 333cc twin. Actually, that was the Scott which the world saw, what young Mr. Angus made ‘his first’ motorcycle, it was built using a homemade twin cylinder engine installed into the steering head of a modified bicycle. In 1906, a basic 2.5 hp single was manufactured by his company called the 'Scout'. The bike was unlike anything what Scott motorcycles later would become associated with. It was a typical primitive with rigid forks and belt drive. Mr. Alfred Scott is credited with the invention of the kick start. Alfred, being the genius that he was, patented quite a few things, like a form of caliper brakes in 1897, a fully triangulated frame, rotary induction valves, unit construction, and more. Given such a reputation, it was only predictable that his brand (Scott) would make a mark on the grandest stage of them all, the Isle of Mann TT and it did in the Senior TT in 1912 and followed it up with a consecutive win the next year. 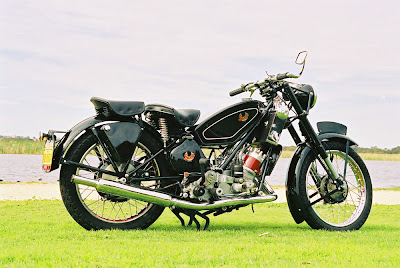 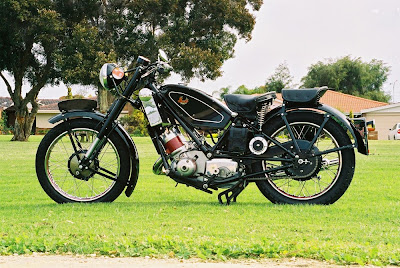 The Scott Flying Squirrel
Amazingly, the Super Squirrel 600cc weighed only 118 kgs and if you associate Ferraris with Ducatis, many critics associate the Scotts with none other than the Bugatti mainly for it being a lively performer. You know, the bike didn’t have a gearbox, what it did was have two primary chain drives which are activated in turn by separate steel drum clutches with a pedal activating the gear, back for low and forward for high and of course, it did have a neutral in between. Can you beat that? Also, it had an open flywheel in between two main bearings with the ends overhanging in two separate crank cases. It is said that the Scotts were among the best in handling and braking. Starting the bike was atypical 2 stroke thing with the choke and a few kicks and that bought out the ‘yowling’ sound of the 2 stroker unlike the ‘growling’ sound you find in most 2 strokers. Even without a clutch, accelerating (as mentioned by those lucky few who got to ride the dream machine) was smooth and you could jolly well keep on cruishing between 60-80 mph. (100 – 130kmph). Funny thing is that with all those advancements, it had an Acetylene headlamp and tail lamp. Scott had a lot of models since many of these models were built according to customer specifications. Yes, custom made motorcycles. They sold quite a handy (upto a thousand ) annually and now whenever the Scotts meet up at any event, the owners find that it is very difficult finding 2 exactly similar Scotts. In fact there are 2 models Kendal Scott and the Reynolds special, which actually started out as custom built motorcycles.Of course among all the Scotts, the Super Squirrel was the most famous which came up in 1924. 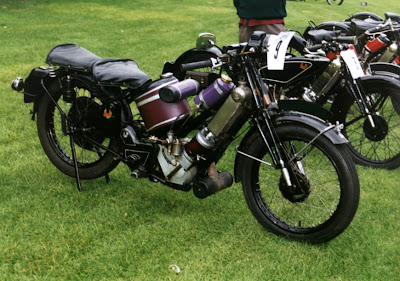 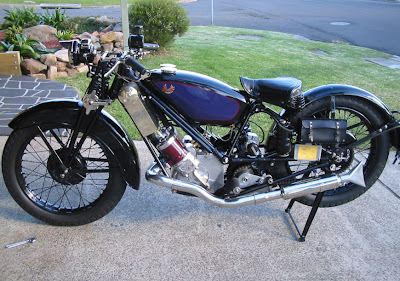 A Scott 2 speeder and a Scott Flyer
Going back to history, the company was affected by WWI just like any other company and Alfred Scott, the founder left his own company post WWI. During the war, Scott motorcycles built a sidecar model that carried a machine gun. Post war, a new factory was set up in Yorkshire and ironically, it was after Alfred left, that the company released the Super Squirrel, but of course he was the man who laid the whole foundation. The Super Squirrel was preceded by the Squirrel in 1922 and there was a Flying Scquirrel model in 1926.
All of the 3 models made Scott’s brand value very high and the machines evolved from two-speed transmission into a three-speed gearbox/ conventional clutch driven machine. The frame was modified into a stiffer (but heavier) duplex arrangement and the frame was used in subsequent models De Luxe and TT Replica. Then with each year new additions were there to the motorcycles to keep up to new standards and the light weight motorcycles ‘added’ quite a few kilos. That lead to a drop in performance of course and the Scotts were no more slim and light. By the 1930s, Scott shifted their objective from slim and light to bigger motorcycles. Then in 1930, an air-cooled Scott single was built. The machine was conventional in style and was pretty cheap compared to Scott standards, but the machine failed. In the mid 30s, Scott started making 3 cylinder motorcycles with engine capacity of 750 to 1000cc, still retaining the water cooling component. 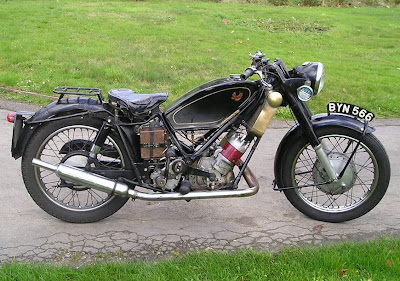 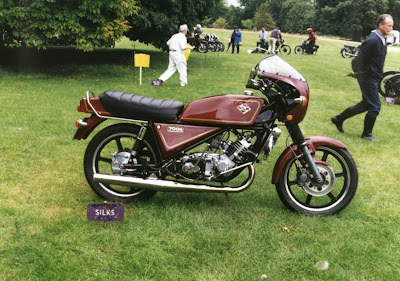 Squirrel Special and Scott Silk
Nonetheless, a 1939 model, Clubman Special which weighed around 180 kgs still was able to run speeds up to 145kmph (90mph). Actually even these motorcycles were quite ahead of its time and each motorcycle was seen as an engineering innovation. During the same time, the next WW was looming and companies were in a bad financial stage and so these 3 cylinder motorcycles were not produced in high numbers. Once the WWII was over, the Scott brand did the best thing possible. It re-launched one of its most successful models, the Flying Squirrel which was available again in smaller sized engines of 500 and 600cc. But the newer Flying Squirrel was not like the previous best seller. It was heavy, it was expensive, Scotts always were, but as performance dipped, enthusiasts started looking into other brands for performance. And in 1950, the company closed shop. Later in 1956, one Mr. Matt Holder, a big time Scott fan, started to reopen the Scott company by producing a new model, the Scott Swift using an engine with flat-top pistons. A few number of motorcycles were made. Holder made the company enter racing circuits in 1960 with a racing Scott twin but it didn’t make an impact anf finally between 1870 to early 1980s, Holder produced the Scott Silk in even smaller numbers, but nothing really fired up the motorcycling world like it did 80 years ago with the Squirrel.
But there are fans, a whole lot who just wont let the marque die or fade away. It is the Scott Owner's Club and just by the look on the website, you can feel the enthusiasm the owners have for their machines. Re-live the beauty of the Scott motorcycles through this dedicated website. It's awesome! 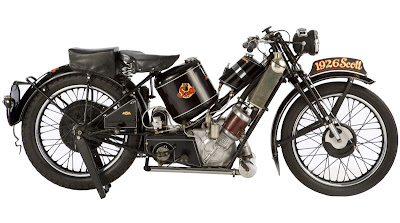 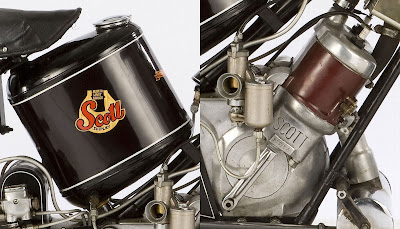 Photo credit: AMA Motorcycle Hall of Fame
The motorcycle pictured here is a famous 1929 Scott Super Squirrel restored by the legendary Von Dutch (Kenny Howard) for Steve McQueen, one of the most sought after bike in auctions today. Von Dutch used his famous pin striping talent and painted the bike and even drew the famed flying eyeball logo that was Von Dutch's signature. Just before Steve McQueen died, Steve gifted the bike back to Von Dutch. Later Von Dutch sold it. In 2007, one Mr. Tonny Sorenson not only bought the bike from an auction at $ 44,460, he got the rights to the Von Dutch name and built a fashion company around it. Currently it resides at the AMA Motorcycle Hall of Fame. It was to go under the hammer at the Antiquorum auction, an auction primarily for watches on June 11, 2009 with pre-sale estimate of $80,000–$120,000, but what exactly happened is not stated anywhere. A unique feature of the bike is that Von Dutch mistakenly lettered the date on the front number plate 1926 instead of the correct 1929.
Courtesy of information and all pictures (except where mentioned): Scott Owner’s Club, see a lot more pictures in its 6 galleries and the entire range profile.