The World's Most Powerful Naked Bike

Okay BMWs are generally not associated with styling, I mean to the oomph factor. Just think which bike has really made the world swoon a la MV or Ducati or HD. Of course, they are beautiful, but I am talking about 'that' factor. But when it comes to pound for pound, Bavarian Motor Works makes the world's best bike. If Honda is for dependibilty, Yamaha for speed and say Ducati for style, in a total package, there is just no beating this German legend. 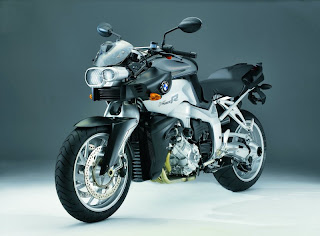 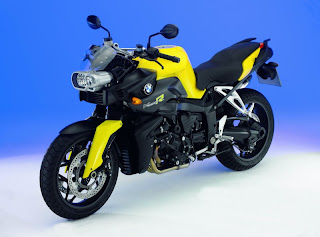 But now it seems, BMW is just not satisfied with being the best bike in the world, they have agressive styling and talk about power.... there is a website by the name of The World's Most Powerful Naked Bike and it features the K1200 R. Its about a single video which I have uploaded here, just watch the video and tell yourself that the title doesn't fit the video. You just cant!

At a stagerring 163 bhp and 94 pounds of torque, no one would have doubts about the title. And the in line 4 engine is so massive, that it resembles one of those custom-made monster bikes. And thats where the trump card is. This is a road bike, remember! With around 200kgs, it still is very docile and very agile. Yes, of course its a BMW. It like Muhammed Ali, powerful and agile at the same time. So, of course, its also a Superbike. But then, thats given, isn't it? 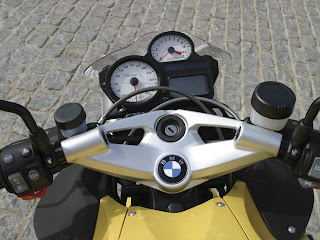 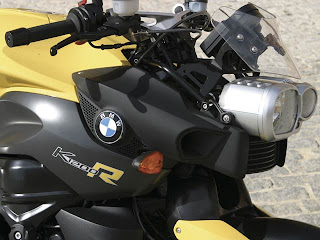 Building up on the K 1200 S, this is the most powerful production motorcycle engine BMW has ever built. The styling is radical, kind of in your face, but everybody loved it. Well BMW was never the see-me-too type, they were always different. But this time, built on the company's history of motor sports, there has been innovations in the K1200 R like a fully sequential cylinder specific injection with integrated anti-knock control and a three-way catalytic converter in the exhaust. No wonder 80 percent of the peak torque is available from 3500 rpm all the way to the 11,000-rpm redline. 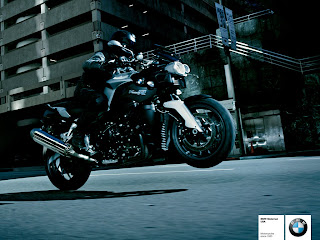 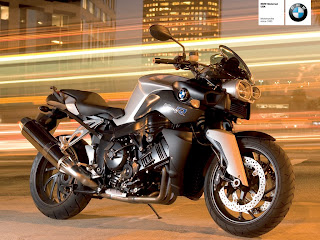 This sophisticated injection system allowed BMW's engineers to boost the K 1200 R's compression ratio to a race-like 13.0:1, which benefits not only power, but combustion efficiency as well. That gives the rider more power and torque, and increases fuel economy at the same time. BMW has also shunned the boxer twin for an in-line four, but only for this series. Then what about the vivrations, after all BMW boxers were famous because the 90 degree positioning killed all the vibrations. So BMW gets a new kind of balancing act. Twin balance shafts are driven by a toothed belt from the crankshaft at twice the crankshaft speed and employ elastomer isolators to reduce transmission of noise and vibration. 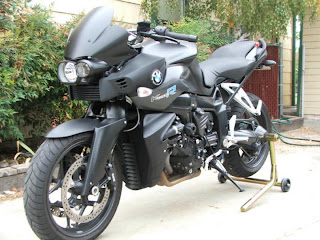 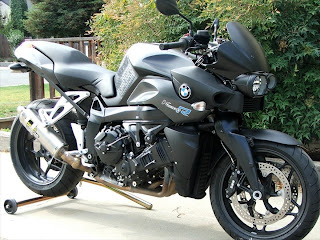 These balance shafts reduce transmission of second-order vibration from the engine to the chassis. And because the counterbalanced engine does not vibrate like a typical in-line four-cylinder, it can be mounted solidly to the frame - no rubber isolators are necessary. The special cast alloy for the frame, specialized Duolever front suspension, the ESA - Electronic Suspension Adjustment - as an option only underlines that it is indeed a BMW. Accessed through the instrument panel display, ESA sets spring and damping rates electronically. The rider can choose three combined spring settings - solo, solo with luggage or rider with passenger and luggage - along with three damping modes: comfort, normal or sport. The spring settings must be adjusted at a standstill, but the damping adjustments can be made while underway. 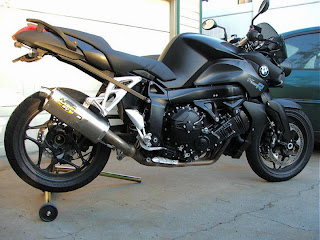 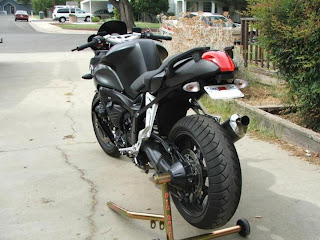 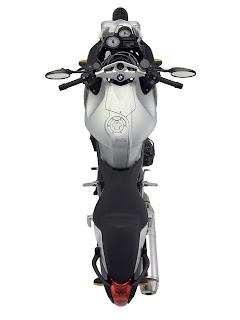 Its naked, street lagal, damn powerful, stylish and what more can one ask for? And Yes! Its a BMW. Read the review of its superb road handling manners and awesome linear power delivery in a article by Jocke Selin, a man who has been driving BMW bikes and has purchaged this beast after falling in love at first sight. Also, there are some people like BMW XPLORER who has added NoS !!! to it. Check the link for more photos.
Specifications
Engine - In Line Four, 1157 cc, Liquid Cooled, Fuel Injected, DOHC
Bore X Stroke & Compression Ratio -79 mm x 59 mm & 13.0:1
Horsepower & Torque - 163 bhp @ 10250 rpm & 94 lb/ft @ 8250 rpm
Valves & Valves per Cylinder - 2 x 32.0 mm intake / 2 x 27.5 mm exhaust & Four
Seat height & Dry Weight - 32.3 inches & 465 lbs.
You can also check the original BMW Official website for more info and a specialized link titled Ride With An Edge, also from BMW for loads of pics and info.