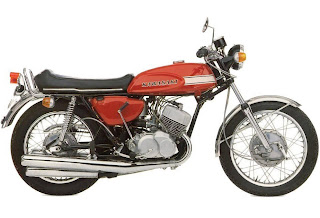 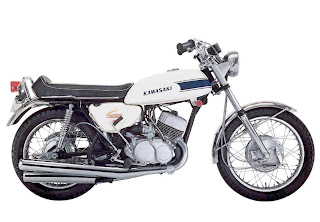 Before the King (read Z1) was there, KAWASAKI was already turning tables with their high performance bikes. And before the Z1, there was the H1. And actually the King was a desendent of the Mach III. The H1 was of course a.k.a MACH III. The Kawasaki H1 was a 500 cc triple cylinder street motorcycle that changed the course of high performance motorcycling and KAWASAKI became famous because of continiously churning out 2 or 3 cylinder 2 stroke high performance bikes.
In the late 60s, the US was the fastest growing motorcycle market and they always carved for bigger bored machines. Honda and Suzuki were already enjoying success in the US with the CB450 & T500 respectively. So, in 1967, the Kwack honchos targetted to create a 500 cc engine and to satisfy the demanding public was to tune this engine to belt out 60 BHP. Kawasaki already had a successful 2 stroke engine planned to do this, the 42 BHP, 350 cc Kawasaki A7 Samurai. What they required was just to bore out the 2 engines, but what they actually did was develop a 3 cylinder engine for more power! which was developed with the assistance of Osaka University. 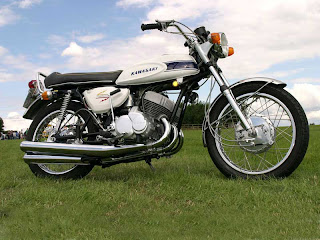 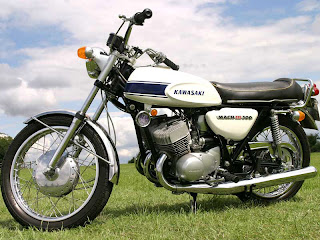 Kawasaki produced the first ever MACH III in September 1968. This was the original 'Pocket Rocket'. It blew away almost everything in its view. Imagine a 500 cc bike 60 BHP doing an 159kmph at 12.8 seconds! Not to mention that it became the quickest production motorcycle EVER! Even now, by today's standards, few production bikes are capable of those statistics. And if you say, it was a 2 stroker, then also think it was way back in 1968. In June 1970 Kawasaki launched a candy red bike with white stripes (picture above) and with a few minor changes, by September 1971, the H1A was launched. And typically KAWASAKI, the bike cost only a thousand dollars. It was this H1 that would typify what Kawasaki became known for - 'Innovation and Acceleration!' The H1 still creates excitement today.
And if you think that was something, then in 1970, came the H1R. This triple puny 500 cc engine belted out an astonishing 80 BHP @9500 rpm. The H1R was available worldwide as a limited production road racer which enjoyed worldwide racing success and KAWASAKI became associated with performance. Official record stats that during the 1970 Daytona 200 road race, an H1R piloted by Ginger Molloy was clocked on the banking at an unheard of 159.83mph (255.8 kmph)! 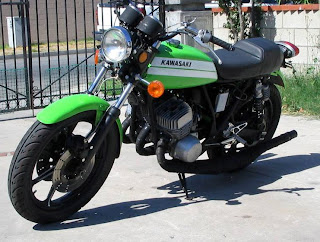 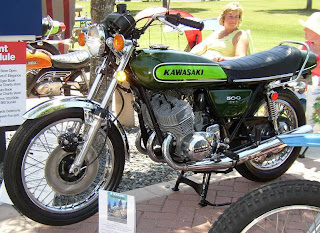 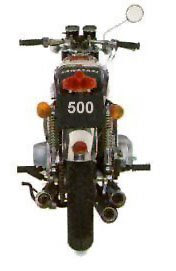 Then from 1972 to 1975, came the even bigger KAWASAKI H2, which was a 750 cc street motorcycle. The 750cc H2 was the top of the line of three cylinders. The H2 set the standard for performance, becoming the quickest bike available with quarter mile times of 12.28 seconds @ 110.29 mph. The H2 once again proved that Kawasaki was at the top of the performance market. It was also fondly called the "Widowmaker".

The H2R was a major contender winning three out of seven AMA races- more than any other manufacturer. The H2R produced between 80 and 100 HP, depending on port timing and compression ratios. The H1R and H2R became known as "The Green Meanies".
These brothers in arms were downright fast, noisy and dangerous. The Norton Manx and Seely was put to place, these bikes produced such power and the best thing were anyone could go to a showroom and walk away with a GP kind of performance bike which didn't require any tweeking or tuning. It did had issues with the gearbox, the brakes, the handling, but if you are a good motorcylist, this was the bike! It was a bike feared even by hardcore enthusiasts! This bike needed to be mastered just like a wild cat. And again, it was Ginger Molloy who mastered this beast and took the "Green Meanie" to second place behind Giacomo Agostini's MV in the 1970 500cc World Championship. But then the age old factor of 'green' environment also caught this beautiful piece of machinary and KAWASAKI eventually bowed to it pressure and in 1976, the H1 was detuned. It was supposed to be the most technically advanced H1, but for hardcore bikers, it was the original which was their fast love. And the H1 stopped its production since. 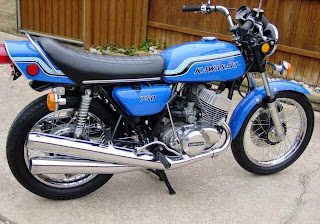 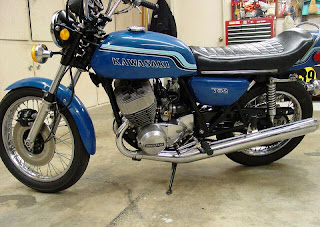