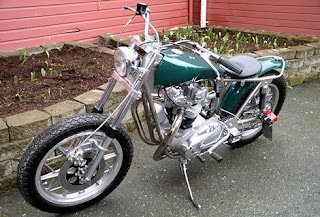 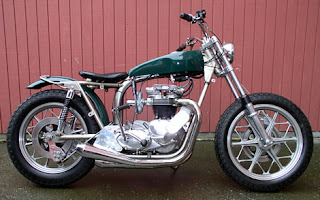 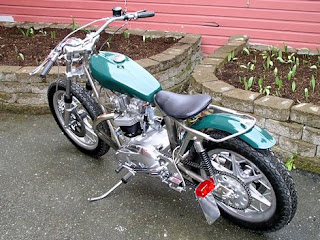 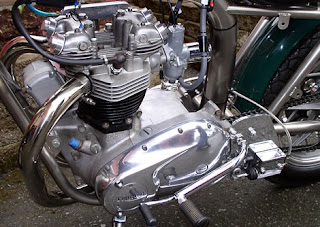 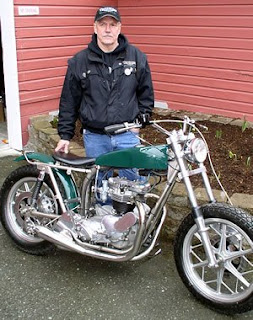 It was a well spent one and a half year by Jerry Ennis of America to rebuild this Triumph Trackmaster. Ennis is a big time triumph fan and has 9 Triumps in his collection. At the Washington Vintage Motorcycle Show at Mount Vernon, this bike drew huge crowds and its not hard to guess why!
The 'Trackmaster' is basically a series which is modified for flat tracks and as such you will also find Norton Trackmaster, etc. The donor is a Triumph Trophy 650 and there were a few special Triumph Trophy in the late 60s which were 'special' and were dubbed "TR6 650". This bike according to Kneeslider (the original source) was never raced. and the engine has been built to stock specs and equipped with an ARD magneto.
The bike is entirely customized barring the stock engine. The snowflake alloys on the wheels, the Ceriani headlight, Flander barsand Kelsey-Heyes calipers all compliment the bike in a pure harmony. The foot pegs fabricated from a handlebar, the stainless reverse megaphone and the alloy clamps were done by one 'Captain Dirt'. The bike weighs a mere 170 kg.
The rear fender was cut down from an early Triumph. All in all, this is a superb product and great effort by a Triumph lover. hats off to Jerry ennis and his team who worked on this brilliant custom bike.
Just for the record, the Triumph TR6 was a air cooled, four stroke, parallel twin cylinder engine with a over head cam and capacity of 649 cc. the bore and stroke is 76 x 71.5 mm and the compression ratio is 8.6:1. It outputted around 42 bhp and had a top whack of 110mph. It was built between 1957 to 1972 and was built upon the TR5 500cc bike. Read more about it on an article by Roland Brown on Motorcycle Classics. I have added a few original pics of the TR6 below.
Above photo courtesy - Kneeslider 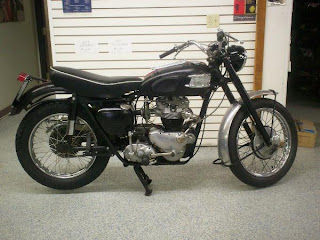 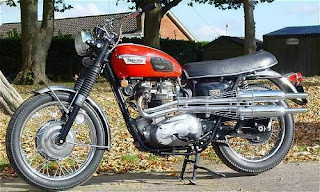