JvB and his Amazing Ducatis - Part I - Hot Rods 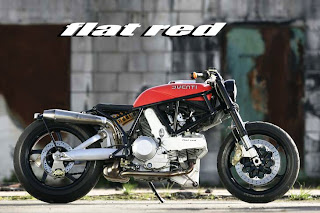 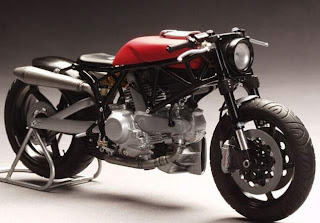 What would you say is someone modifies a Ducati? Usually most of us would scream sacrilege! After all how could someone even think of modifying something so elegantly beautiful? After all its a Ducati. Still people customize and modify their Ducs which some would appreciate and some would say that the original was better. But what if someone says that a modified Ducati is actually better looking and better performing than the original? Performance can be outdone from an original, but looks? Is it possible to get a visually more stunning Duc than a factory produced Duc? 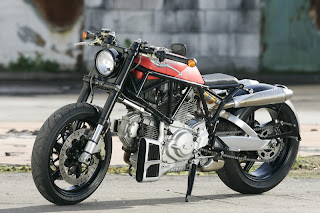 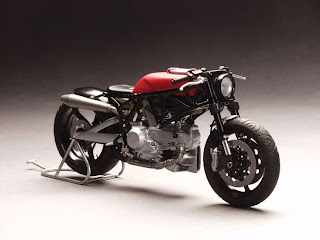 This is where JvB-moto comes in. Look at the photos and tell me that they are not absolutely stunning and mesmerizing! I bet you cant. Dont know about you but I am floored. Infact I would need at least 2 posts to complete the topic. Usually in a blog, you take some pics from the source, but here all the pics were so stunning to look at, that I took half of them and to fill these pics, I need at least 2 posts.
So lets get started. You might remember, well obviously you do remember the "Design Your Dream Ducati" contest. The overall winner in the coveted and most prestigious 'Bike' category is the Ducati flat-red Hot Rod by Jens Vom Brauck and you can see his creation here. Well, of course JvB stands for Jens Vom Brauck. The "Flat Red" concept was described by Ducati as "a minimalistic Ducati hot rod with timeless appeal and style." Based in Cologne, Germany, it was only a matter of time to materialize this concept bike into a production bike. 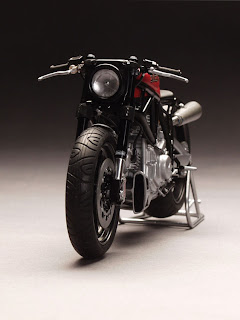 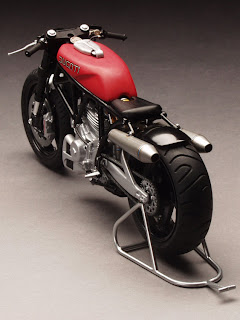 But it would have been unlive of JvB to just design one bike, so he has designed a few more and all the bikes really really stand out and even from each other. The looks are really (as Ducati said) 'timeless'. It has the futuristic look while maintaining a classic styling. It just seems like a perfect blend. Sheer genius, this JvB, wont you agree?
This hot rod has been aptly titled "Ducati Flat Red" and in JvB's own words "They call it retro. We call it Rock`n Roll. ... In my work for the Ducati design contest”Design your Dream Ducati”, I wanted to find a compromise between the style of a classic, clean chopper and the performance of a superlight, fast and powerfull sports bike. Inspired by old-school hot rods , I wanted to build a real rock`n roll bike." It is! It is! He continues in his website "Timeless hot rod styling, absolutely minimalistic design, low riding position and visible clean technics bring motorcycle fascination even to people who are not into bikes. Of course it´s not the most practical bike, neither is it made for the racetrack, but it doesn´t want to be.It wants to be good fun, it will deliver lots of character and it is going to be cooler and quicker than every 'cruiser' ever built." 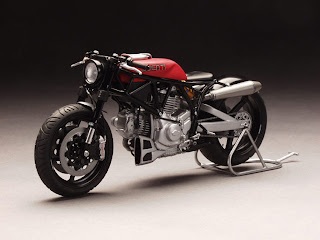 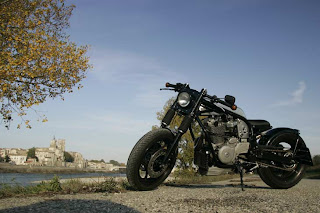 The blend of old school with modern technology is just too perfect. The bike was first developed as a 1:12 scale model and later built on base of a Ducati 900SSie from 2002. You cant see a single wire dangling out. The single yellow coloured monoshock gels very well with the special exhaust system and the single seat to give the rear end a perfect hot rod finish. The oil cooler, battery and electricals are housed in aluminium casing. There is a huge air intake with a filler cap combination for this 160kg 85 bhp beauty. You can also see how the bike was conceptualized to the finished product here. 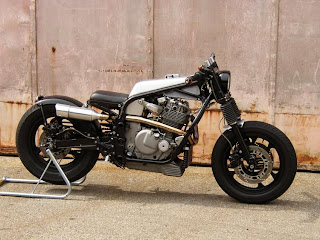 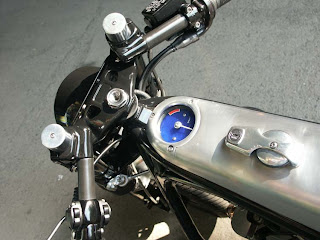 JvB has also done the same brilliance on 2 moto scramblers based on the Ducati. But let us leave that for the second post. Right now, concentrating on Hot Rods, he has built another hot rod, the 'single HOT ROD' which unlike the Flat Red is based on a Kawazuki or (if you like it) Suzusaki, that is a hybrid of Kawasaki and Suzuki. It started out as a low budget project in 2001 (although looking at it by no means it looks low budget) with a XF 650cc Suzuki engine on a GPX 600 Kawasaki Chassis. JvB in his own words have said that he has been a big fan of radical old style hot rods, but he always felt that they were too heavy and thereby missing the fun factor. His fun factor being a hot rod styled bike with a light body which will be quick. The 'single HOT ROD' was a product of his fun factor and 'single' because he always wanted a single engine low riding fun, I mean bike. Although it started out as a hot rod and yes! it does look like one. but at 150kg with 50 bhp on tap from a single engine, it feels like a supermoto, which ultimately formed the basis of his future projects, the Ducati Scramblers. 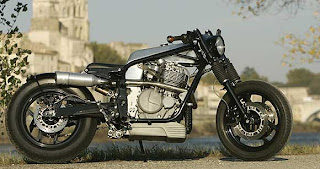 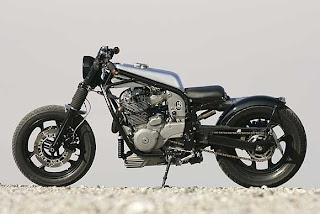 It was his first project and besides it has won lots of prices on bike shows and contests, so its probably closest to his heart.
Enjoy the pics and Yes! definitely visit the website for a lot more of such pics and also more information.
The next post will cover the Scramblers and another prototype which never went production