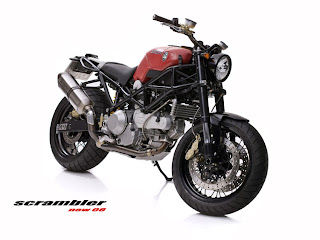 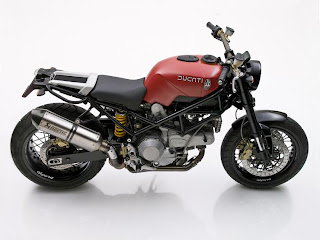 (Continuing the post from here, the following post focusses on the Ducati Scramblers.)
The base of the stunning JvB-moto Scrambler (2008 model) is the Ducati Monster 1000ie. It is tuned to belt out 95 bhp from the L-Twin and at only 170 kgs, you bet it's gonna perform with that kind of a power to weight ratio. Various in-house carbonfibre and Kevlar parts have been used in the bike’s construction. Jens vom Brauck has taken the design cues from classic Ducati scramblers of the 1970s, making it a light, fast and agile allrounder. JvB says "The classic Ducati scramblers of the 70´s were always extremely light, pure and handy streetbikes, with the possibility to ride slightly offroad, dustroads or sand.Also with this bike it wasn´t the intention to build a pure offroad bike, but aminimalistic allrounder, impressing with its usability, its lightness and its minimalistic design. Above all it is great fun to ride." And it seems he has got his vision materialized to the T. 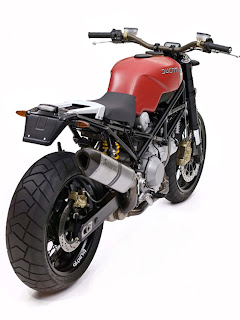 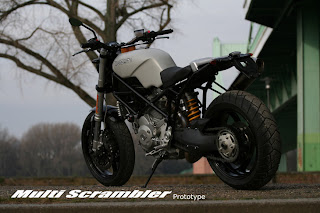 To give the bike a more central positioning to maximize the riding fun, the battery has been mounted under the seat giving the fuel tank to reshape in a more slimmer version which also accentuates the Scrambler moto. So the tank was also made in-house from carbon/ kevlar fibre. The bike is very minimalistic. To make it so, everything which was remotely unnecessary was removed to reduce the total weight. Come to think about it, it should perform batter than the Ducati Motards. This is not a concept bike and it has been reproduced according to customer demands and so if you have the moolah, you can also have the JvB moto Scrambler which will outperform that Ducati hypermotard you have been eyeing to get your hands on and more over it's custom made, so you can definitely show-off! Moulds were made in-houseand and JvB are currently accepting customer requests with specific demands. Just to mention, the bike is completely hand built. Everything, from the equipment to the ergonomics to the colours and materials used can be customer specific. For starter, the most minimal conversion would cost you around $12,000. 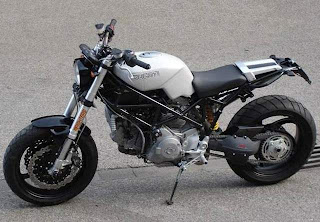 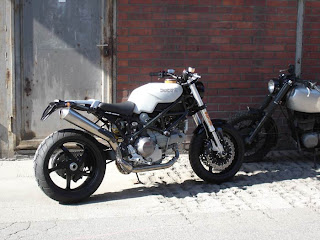 Another prototype Scrambler JvB is working upon is the Multi Scrambler. This bike is the prototype for the scrambler. It is a project based on a Ducati Multistrada and built in 2006 for the German magazine Fighters Magazin. No more information is given about it although there is a press coverage but the language is German and so.... 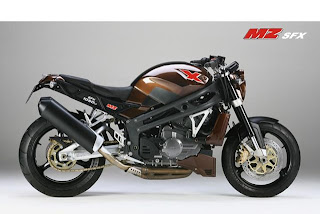 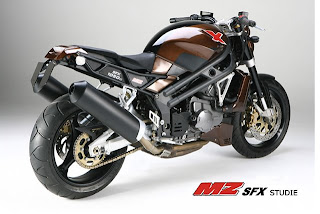 JvB has also worked his magic on a prototype bike. Its the MZ SFX Concept. MZ stands for Motorradwerk Zschopau. Once the largest motorcycle manufacturer, they are now satisfied with their European customers and probably do not export it elsewhere.
This is considered a prototype and MZ may lean their future bikes towards this designing, especially the all-new 1000 cc MZ Superfighter motor. It looks damn robst and compact accentuating the streetfighter mode. Sources says that MZ was losing their market value and this prototype has raised expectations again. JvB has also facelifted the 125cc model range of MZ. The basic principles of this model according to JvB are visible frame tubes, compact components around the steering head and reduction to the essential parts, giving it a simple yet brute look which will be easy to handle due to the modified steering geometry. The above speculation and information was during 2006 and it seems nothing further has materialized as the website stats 'Unfortunately the SFX remained only a concept '.
Do visit the JvB website to see his art and also for more info and photos.