There is something about Choppers that catches the imagination of bike lovers worldwide. Whether its the US of A in the west or India in the east, it has always been a cherished possesion of bike affanidos. And yet, no big time manufacturer has ever rolled out a Chopper from its factory, I guess Chopper means exclusivity. Those thick rear tyres, wide and raised handlebars are marks of a chopper. With a lot more than these as common factors, yet hardly 2 choppers have ever looked similar. Such is the craftsman of these builders. 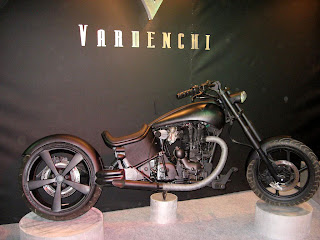 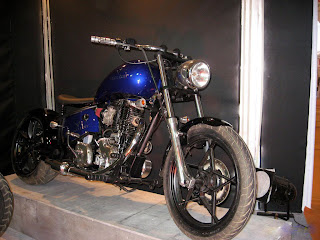 While in the eastern world, Larry or OCC enjoys rockstar celebrity status, here in India, although the 'Chopper' thing is pretty old, builders specializing only in choppers are relatively new. But there are quite a few talent who are very exciting. And I mean very very exciting. Specially because if you look at the resources, they are very minimal. 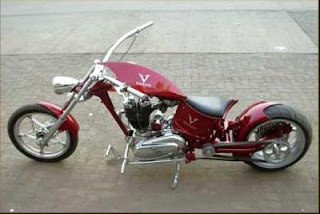 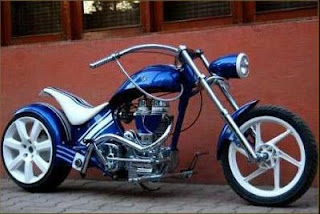 Now back in the US, when you say Chopper, the first thing is the big American V-Twin that comes into the picture. Now when you say Chopper in India, replace that V-Twin by the good'ol Royal Enfield Bullet. In fact dont just replace the engine, replace everything... What I mean is that the ingredient of almost all choppers in India is basically the Bullet. Although the Bullet isa 50 years old technology machine, the good thing is that the entire bike is like an assembled one. 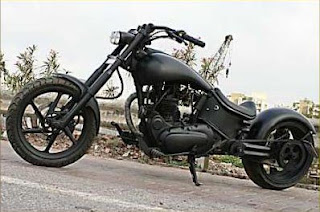 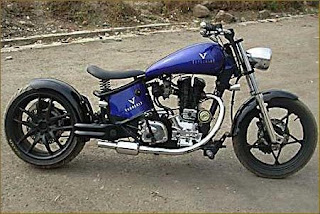 You have the chassis, right? Now you have the seat on two adjustable iron bolts. Keeping the plate of the seat, you can design any kind of seat you want to. And the same goes for the mudguards, handle, tank and anything you can see on the bike. It really is a glorified assembled bike. And thats why it is easy to customize and of course being British, it gives a status of its own. Oh! how can you forget the legendary exhaust!
So, as we were talking, The Royal Enfield, for its easy customization forms the bone of majority of choppers in India. Initially these used to be personal customization with minimal changes but nonetheless noteworthy which used to get into the magazine covers. Recently there has been quite a few groups who have taken this into another level, who are pros like the OCC and yes, thanks to OCC and Discovery Channel, finally in India, you dont have to hit your head with the hammer to figure out how to get the chassis extended. Akshay will do it for you. Varde! Akshay Varde, the lead in the 'Brotherhood' of Vardenchi. According to the website, he was not very happy with his earlier line of work and when he switched profession, it was more like coming home as now he gets paid for what he LOVES doing. I believe it cannot be always rosy, but which true blue biker wont like to live in a world full of bikes, and not just bikes, customized one-of-a-kind bikes surrounding you, oil and gas burning, the smell of fresh paint... ah! 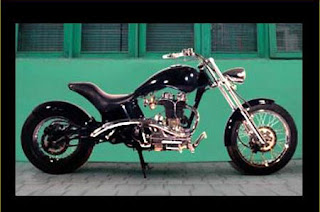 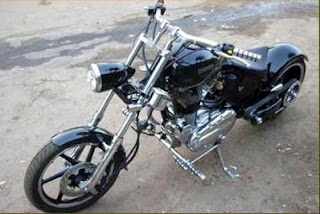 Anyway, Akshay had a 'done up' Bullet which actually started all these. The bike you see in orange with the brown seat was the first bike he worked upon. That he is so damn talented can be evident from the first product itself. Slowly the brotherhood increased to now 7 members, all young, hungry and talented. In fact, they had made a lookalike Ghost Rider chopper to promote then film and their brand of art. Of course the look alike was only a dummy model, but they also had a 'rideable' one on the lines of the Ghost Rider which was given away as a contest price winner. 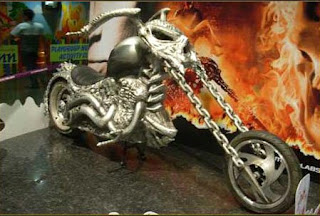 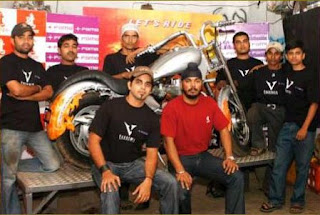 Probably the best part of their work is that with simple changes they can give you customized bikes which will stand out even from each of their products. If you look closely, you will notice that most of the bikes have a formula - extended chassis, single seater on a hiden monoshock with the customized tank, customized handlebars and headlight. Simple, isn't it? But then think again, it would have been so simple if they actually followed the formula, in fact there would have been Vardenchis all over India. 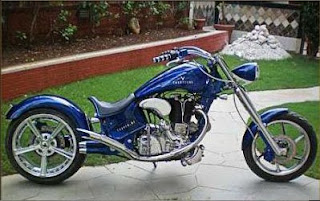 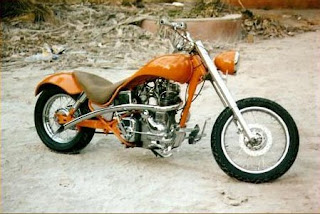 And its here when Akshay and his gang scores heavily. They just know how slim and streamlined or how elongated the tank needs to be to get 'that' look, that exact height of the seat, that exact handlebar to match the overall look, it seems every product they have landed their hand on just looks perfect. Even those various silencers just looks so complimenting to the bike feel. I am sure they must do a lot of homework before getting the final product. as a customer, you need to tell them exactly what you want and rest assured, they will give you a product which will exceed your expectations. 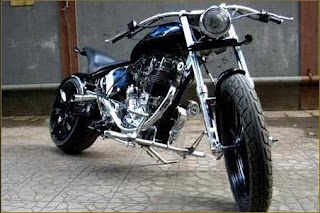 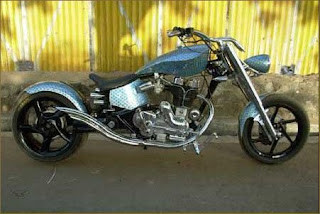 The trump card (which I feel) although lies in their paint scheme and job. You will see that there are a lot of blue bikes here, but they are different by a pole. If one has a black mudguard with black alloys to compliment the body colour, the other has a similar body colour with mudgurads but with white alloys. The paint scheme is what makes these choppers stand out. I am sure you will agree. And the finish is of course of the highest quality, so the asking price may look a bit steep, but then this aint no just a regular customized bike. This is a Vardenchi product and it is an established name now in India. Although Royal Enfield Bullet is their preferred base of work, you will also find some other models like an erstwhile Kawasaki Eliminator or like a V-Twin they had featured on their blog. Both the 350cc and 500 cc models of the Enfield has played donors in various bikes. 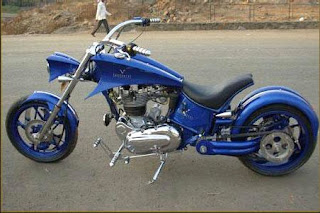 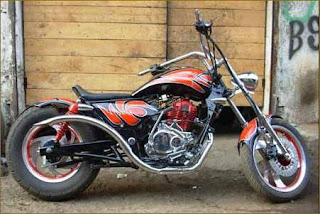 Its not only bikes, you can also order various accessories like handle bars, tail lights, etc from them. They even have ready made kits for your Enfield. now how can you top that? So, next time you in India and you are thinking of covering the huge corners of the country on an Enfield, whu not get all the attention? I just told you how! Go check out their website (even the website is customized) or do drop a line on their blog. Pictures courtesy their blog. First two pictures courtesy Flickr.