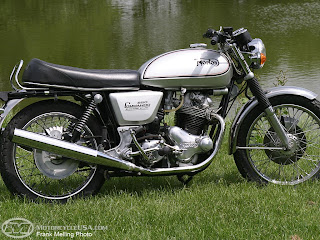 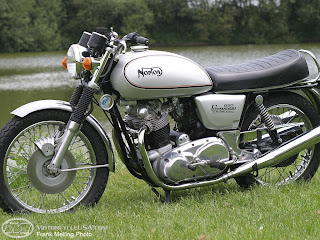 Which bike has won the five successive "Machine of the Year" competition? Well, that was easy. The Commando won the MCN Machine of the Year from 1968-1972. That was interesting since the Commando itseld has only a 10 years history from its first production in 1967 to the last production in 1977... until it was later resurrected again in 2005.
From the time of its launch on one fine day at the Earls Court show, it mesmerized bikers and critics alike. Some say it was the swansong of the British Motorcycle factories. It was used for touring, road racing, endurance racing, you name it, it has done it all. It was known for its superb handling just as all Nortons do. And reliability? That was why Commando became 'the' Commando. 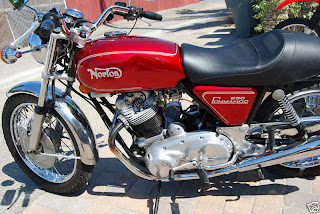 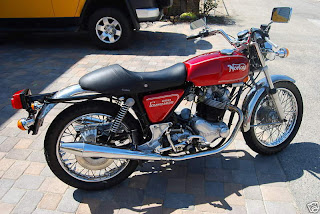 Imagine a 800cc twin British bike in endurance races! The heart of all Commandos is traditionally British... a big air-cooled, push-rod Twin. Based. Based on the 1975 original 497cc Hopwood-designed Dominator engine, Norton launched it in 1967 when the Japs were already on full rampage and Norton had the guts to release the Commando with a 'Kick Starter', seperate gear box and gears on the right! Did I mention the word 'traditional'? But Norton was sure that this IS the bike. And they were right. Until Norton launched the MKIII Commando which had a left-hand gearshift and an electric starter. The thing is if you bore a 497 cc engine into almost double its size at 828cc, how much power can actually be traslated? 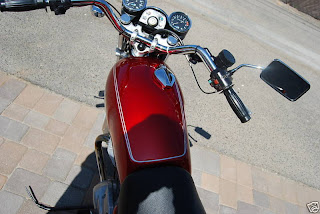 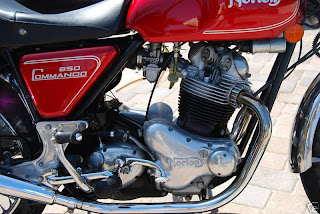 Initially Norton wanted to rival the Japs, but the motorcycle was more like a cruiser than a racer. Critics however say that like a true Norton, it did everything quite satisfactorily and more such as the gear box... bikers still maintain that it was a flawless piece of engineering till date. Even the original brakes from Lockheed were exceptional. We will go its history a little later, but let me finish off one trivia before I forget to put it here. The last Commando was released from the showrooms in 1079, but the last Commando to comeout from its factory was 1976. The Villiers factory in Wolverhampton stopped production due to some ownership issues in 1976 when around 1500 Commandos were in the process of being built. Dennis Poore, previousy owner of the Norton brand declared that he would buy off the remaining Commandos as soon as the bikes are ready and he did it too except for the last 25. People knew that the Commando was coming to an end and so Norton retained the last 25 bikes and sold them directly at a much higher price. 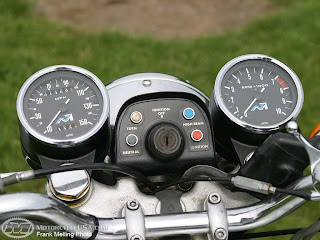 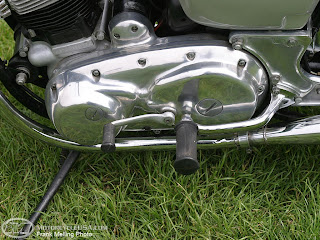 Among the bikes featured in this post, the silver coloured one (pictures courtesy Motorcycle USA) was the last bike to roll out of the Norton showroom. It was sold in a formal ceremony where Ray Petty, the Norton tuner handed the keys to the customer. But there is another piece of interesting history. John Pedley, the Norton works manager actually built another one for himself and so it can be said that he actually had the last laugh, I mean Norton!
Well that was then. But now thankfully Norton is back and they knew the Commando was too good a model just to keep it in history books and so in 2005, the Commando was back. If you are interested, you can read here about the stunning new gen Commando. 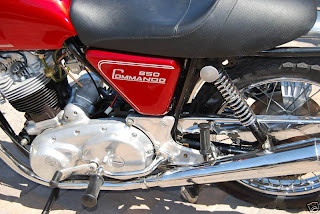 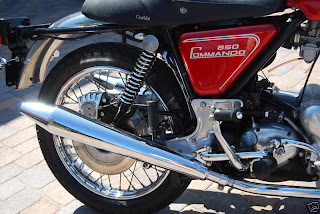 Okay History period - The origins of the Norton Commando can be traced back to the late 1940s Norton Model 7 Twin which had the 497cc engine , designed by Bert Hopwood and so known as the Hopwood engine. Cubic capacity was increased to 650 cc when the Dominator came out followed by a further increase to 750cc with the Atlas. The same 750cc was later launched as the 750 cc Commando in 1967. So what was different from the Atlas? The frame! Yes, the classic hallowed Norton featherbed frame was replaced! The new frame was developed by Dr. Stefan Bauer (former Rolls Royce engineer) who believed the classic Norton Featherbed frame design went against all engineering principles!!! The new frame was designed around a single 2.25 inch top tube. Now vibrations were common among all British bikes, but for the Norton it was more evident as the same frame which hostled a 500cc was now holding a 750cc. So it was decided that the engine, gearbox and swing-arm assembly were to be bolted together and isolated from the frame by special rubber mountings to eliminate extreme vibration. 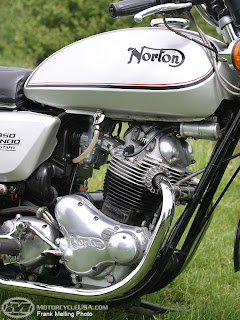 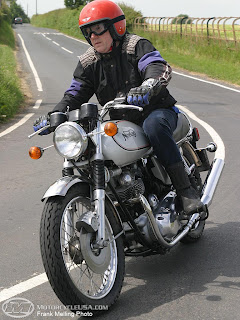 The new frame was named 'Isolastic anti-vibration system'. The first model of Commando was the MK1 750cc. The original model, called the 'Fastback' was joined by the production racer 'S Type' featuring an OHV tuned engine. The funny thing was that these bikes was 'assembled'. You see the engines were produced in Wolverhampton, frames in Manchester, components and final assembly was at Plumstead. Frame manufacturing was later transferred from Mancester to Wolverhampton, where production capacity was 80 per week. Anyway, the S version also called the 'Roadster' had low-level exhaust, upward angled silencers and reverse cones, by which we now familarize Norton. In 1970, came the MK2 which had alloy levers with modified stands and chain guards and by '71, Norton had the ‘Fastback Long Range’ with increased petrol tank capacity. 1972 saw the introduction of the ‘Combat’ in the MK4, an updated version of the ‘Roadster’ and the ‘750 Interstate’. The ‘Combat’ delivered 65 b.h.p. at 6500 r.p.m. with a 10.0: 1 compression ratio, but the engine was very unrelaible which also had quality control problems. The 'Combat' was stopped immediately and thas why we never hear of a Norton Combat. By 1972 NVT was formed (Norton Villiers Triumph) as the UK Govt. decided to merge the BSA - Triumph comapny with Norton Villiers as BSA Triumph group were in serious financial trouble.
The MK5 came in '73, but the Long Range was stopped. This was the 828cc engine which also found place in the ‘Roadster’, ‘Hi Rider’ and the ‘Interstate’. 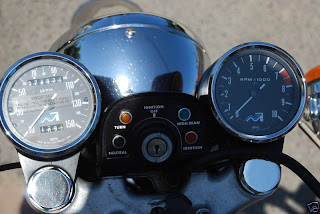 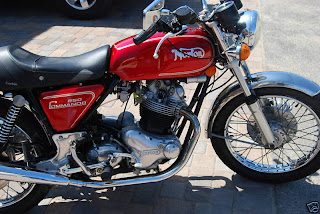 But 1973 also saw a major uproar by the NVT workers union and work was stopped and NVT reported to have lost over £3 million. But the Commando was never stopped and in '74, the 'JPN Replica' was released. '75 saw the 850cc MK3 which had the distinction of having an 'Electric Starter'. Not only that, at previously mentioned, it had left gear shift, right foot brake and also a rear disc to meet US norms as US was a huge export market for Norton. Although the engine was bored out, other specs remained the same which means the engine was less stretched. That continued till the last model of Commando.
The Commando also made an impact in racing events. 2 Commandos finished in top 4 positions in the '69 Isle of Mann TT. The same year Commando won the Hutchinson 100 Production. In 1973, Peter WIllaims won the Formula 750 Isle of Man TT on his Commando. After the mid 70s, Norton finally closed down and then started the war... of trademarks.
The legal battle over the name Norton was fought not between companies, but countries - Germany, Canada & U.S. Then there were big companies like Norvil (U.K), CNW & Vintage Rebuilds. All 3 are still very very active. Mr Kenny Dreer of Vintage Rebuilds showed off a 'new' Commando based Norton VR880 Sprint Special in 1999 but has again run into legal suits.
Photo Source - E-Bay, Motorcycle USA 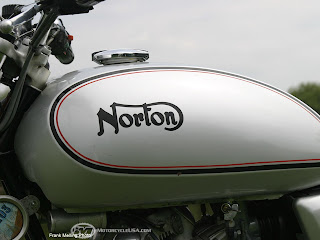 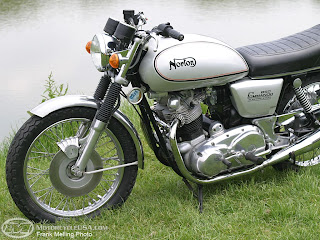