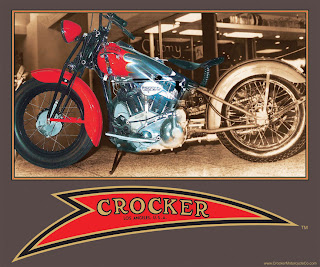 A promo poster showing the legend resurrecting from the past to the present.
Picture courtesy - Mr. Michael Schacht via email.
I had posted about the legendary CROCKER Motorcycle revival here some time back and then I got a mail from the main man behind the revival, Mr. Michael Schacht. I acklowledged the mail in my blog here and mentioned that Mr. Michael Schacht as a business partner with Mr. Markus Karalash. But there has been a mistake. Mr. Michael had send me another mail clearing the partnership business in the Crocker revival story.
Here is the mail I recieved.
Diesel, I have cut and pasted an article that will give you the correct information in regards to Mark Karalash and myself. Please make sure this info is posted. Thanks.

Markus Karalash and Crocker. Although Mark (his real name) Karalash did contribute to the Crocker project by borrowing the two original Crocker's from collector Harry Buck, he did so by promising Harry a free restoration. That was back in 1997. Harry's bikes have not been restored to date. So goes the rest of the Crocker story in regards to Mark. Mark has taken credit for the work of many people like Ole Kiprianoff and Brian McCabe, the two pattern makers who were responsible for all the Crocker patterns. The "triple tree" improvement Mark Karalash took credit for in the articles was really a request by Michael Schacht to Ole Kiprianoff to create the casting as one piece unlike the original that had the lower boss attached by a sloppy weld. Being the excellent pattern maker Ole is, he did exactly that. Although Ole is now retired after 40 years of pattern making, he would be more then happy to talk about his time with Crocker and back up all these facts. Brian McCabe is still the pattern maker for Crocker. Karalash's "world wide sales" he often spoke about in articles and interviews was in fact 20 unmachined tail light castings sold to a builder in Japan and Schacht was already part of Crocker at that time. It was Michael Schacht who worked with the foundries, pattern makers, engineers, metal spinners, fastener people, ect. All facts can easily be proven. Mark Karalash is in no way an engineer nor does he have engineering skills. All engineering was done by Marko Goffman, the in house engineer at Crocker and Maziro Inc, a prototype engineering company in Toronto, Canada who specializes in automotive. They are the same people who rented Crocker factory space due to Michael's friendship with the president of Maziro, Zenovi Mallots. The Crocker C4 concept like seen in photo's, on the internet and posted on the "Guild" website was designed and fabricated in house by Daryl Tearne, the resident designer at Crocker Motorcycle in Toronto back in 2006 and 2007. Daryl now works as a designer for Erik Buel at BUELL Motorcycle Co. (P.S - I had initially written Eri'c' in place of Eri'k'. I stand corrected - Thaks Mr. Blake) The 2007 Big Tank Crocker prototype seen in photos was assembled at Crocker by Andy Schywiola, Crocker's assembler/fabricator. What Karalash did do mostly in the 3 plus years at the Crocker factory was answer the telephone in hope of intercepting any media that might call. The proof is in the numerous articles describing himself as the creator, builder fabricator, engineer and driving force behind the company, embellishing or even making up stories for print. Karalash has always been one of those people who think that if something gets printed it becomes truth.Mark Karalash is no longer with Crocker Motorcycle. The company was bought out of bankruptcy by Michael Schacht after Crocker became insolvent because Karalash failed to invest his share of money based on his and Schacht's shareholders greement and Schacht would no longer carry Karalash . Karalash did not even how up to bid on the assets of Crocker at the auction. Schacht is now in the process of moving Crocker back to its original city, Los Angeles CA.

--
Michael Schacht
Crocker Motorcycle Company
CA 416.650.0100 US 323.306.0690
http://www.crockermotorcycleco.com/
First of all, I am sorry, Michael as my knowledge is more or less based on books that I have read or the internet. I am sure you will excuse me for that mistake. But secondly and more importantly, all we biker fans can pray and hope that you do not face any more hurdles legally or otherwise in reviving the legend. All our wishes are with you. It is an absolute delight for any fan to see such a beautiful piece of machinary on the go, let alone the tradition, craftsmanship and the legendary status it carries. Out of the great pre 60s brands, I can only remember Norton as a brand which has resurrected. There are no more AJS or BSA, Vincent is still fighting its legal wars. We all bikers really sincerely hope that you succeed in reviving the lost world of CROCKER.