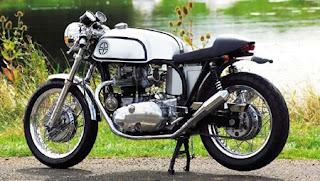 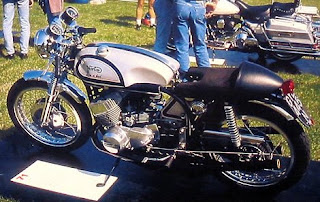 This are some fine looking Café Racer. Well although Café racers are actually meant to be pure British, you know BSA + Norton or Vincent + Triumph, etc, there can also be a Brit – Jap combination, no!
After all, the Brit engines are not bullet proof at least in comparison to the Japanese. So if simply couldn’t be better if you have a Japanese engine with the British looks of the tanks, handlebars, seat, etc.
This is a Norton – Kawasaki with a little bit of Suzuki in it and lots of self made accessories. Mr. Phil Klawsuc of the U.K is the proud owner of this beauty. He put his 1968 Kawasaki W2 engine into the Norton featherbed frame, a frame which will probably house any engine you throw at it. He uses the W2 because he wanted to make a real looking Café Racer and the W2 was very British looking. So again you get a not so modern engine in a classic British frame, but nonetheless, the engine is reliable. 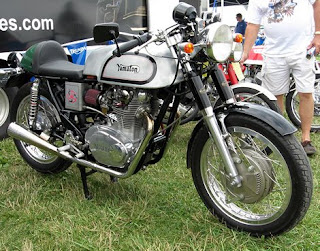 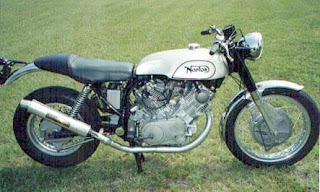 Look at the second picture on top. Another beauty here is yet another Norton – Kawasaki partnership in again a Norton featherbed frame. The engine is from a Kawasaki triple which is a 2 stroke mean machine. And the third is a Norton – Yamaha affilation, named YAMATON. The Yamaton is actually a pure Yamaha 650 Special with its frame and engine. Built by Bob Vail of the AMA, the tank is a Dunstall Norton and there are lots of other bits were hand made by Bob. The last model you see is also a Norton – Yamaha combination, the engine is from a Yamaha Virago V-Twin. No more information on the bike.