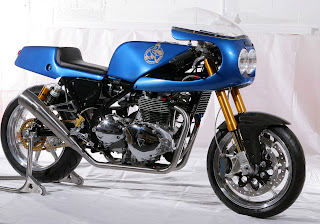 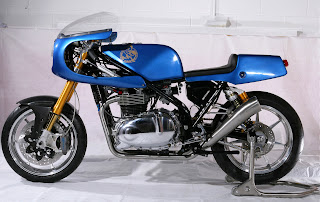 Well you must have heard of Mr. Norman Hyde or in case if you haven't you need to check him out. For over two decades he has been associated with Triumph and more with the Bonne. Now the Bonne has entered its 50th year of production as we all know and there has been some serious work related to it and I had also made a post on it earlier here and here. Mr. Hyde has also come up with own tribute to the legend of the Bonneville.
This also coincides with the 21st anniversary of the Hyde Harrier (I am coming to "whats the Hyde Harrier?" later in the post) and it has been aptly named the Hyde Harrier Jubilee which is in fact the result of a 15-month project by Norman Hyde in association with Harris Performance. This prototype Jubilee was launched at the NEC Bike Show in November 2008.
As such the company produces accessories for new Hinckley Triumphs, as well as spares and accessories for Triumph 650 & 750, Norton Commando and BSA A75 beside being stockists for various accessories like Toga Classic Motorcycle Exhausts, AP Lockheed Brakes, etc. 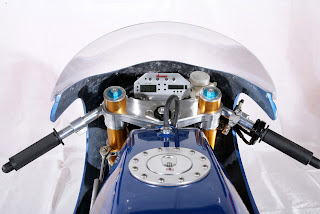 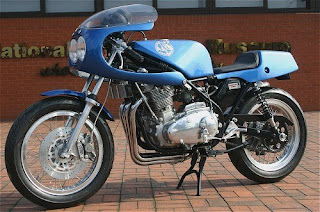 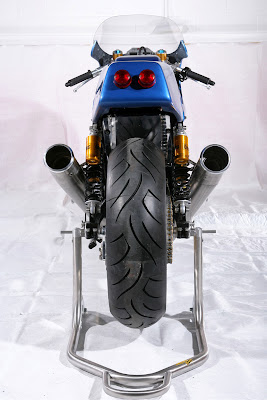 Actually, what you see in the Jubilee is 'a kit'. Yes, that's right, so you can just purchage it OTC and make your own Bonne into the special Hyde Harrier Jubilee. The Base Kit form will give you a painted frame & swinging arm, non-painted fuel tank & seat unit with upholstery, battery carrier, dummy oil tank, footrests & fixings, gear lever, rear brake pedal (both with linkage), rear mudguard, prop stand, rear wheel spindle & adjusters and adjusting spanners. Well thats about it, what more can you ask for, but wait, there is also a Top Kit where you can make up the full Jubilee as shown in the pictures. These include a handmade Harris stainless steel race exhaust, Öhlins suspension front and rear, forged Dymag wheels, Acumen instrumentation, AP Lockheed radial brakes and Keihin smooth bore carburettors.
Like the original Harrier, the Jubilee is powered by a Triumph engine, although in this case a modern Hinckley-built 865cc unit. However customers may pick and mix a variety of exotic components to add to the Base Kit, as shown on the prototype.
Hyde Harrier, the brainchild of Norman Hyde are conceived as a high-performance machine, like the factory triples of the 1970’s. These Cafe Racers are street legal though capable of 130mph . Mr. hyde started work at Triumph’s Meriden factory in 1965 and was part of the team that developed the three-cylinder 750cc BSA and Triumph racers of the early Seventies. He was also a successful drag racer and record-breaker. The Hyde harrier was first introduced to the world at the 1987 Motorcycle Show (so its the 21st year as in 2008). The Harriers were tuned Triumph engines which were aided by Harris Performance who supplied the stronger chassis, suspension and tyres. It was so tough and eduring and proved a race winner when the first Harrier race bike won its inaugural race at Scarborough in 1988, in the hands of TT legend Geoff Johnson. These chassi kits are still available and as a tribute has also been acknowledged in the National Motorcycle Museum. These modern machines are powered by the electric-start 750cc T160 Triumph Trident unit made from 1975-1977.
So if you want to personally thank him and get your stuff, you can meet him at the following address - Norman Hyde Ltd, Rigby Close, Heathcote Industrial Estate, Warwick, CV34 6TL or if you are the casual sort, why not call him at +44 (0)1926 49 73 75 or fax him at +44 (0)1926 83 23. The retail price for the Base Kit is £3995 and the Top Kit is £6643 (both exclusive VAT). For more information, visit Hyde Harrier or Norman Hyde.