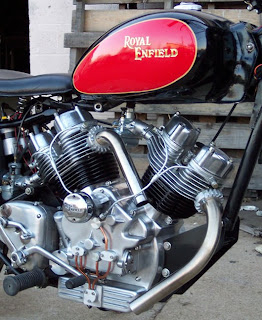 Well, we all know that THE KNEESLIDER comes out with some of the best posts in motorcycling blogs. And today they again featured what seemed to me as a very interesting and good post worth making a note. They have featured a customized Royal Enfield, The MUSKET. Yes Royal Enfield customization is very common, after all its the oldest brand in motorcycles still in production and a real throw at nostalgia. Only recently as 2008, they have updated their engine into a Unit Construction featuring the gear box inside the solo engine, dont be surprised if you didn't knew because Enfields till 2008 and even now come out with engines which has the gearbox in a seperate box altogether and you must be aware that there are models which still feature right side gear lever. Now if thats not nostalgia, I dont know what will be. 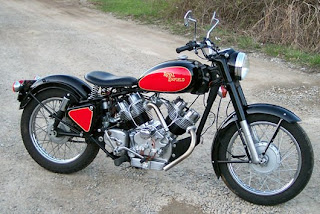 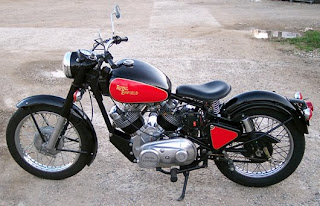 Anyway, Royal Enfield customization as per the engine goes is quite rare and most customization are in the body parts. But you must be very aware of Carberry Enfield who fused 2 500cc engines into a V-Twin. I had done a post earlier on it. The following model is something similar, well almost but the engines are 350cc, so you get a 700cc V-Twin. Probably the first in the world. This bike looks like an 'actual' production bike from the factory. The biker and inventor behind this beauty is one Mr. Aniket Vardhan, an Indian who shifted base to U.S primarily because he loved Harley Davidson. His love for HD shaped his career as he wanted to be a Masters in Industrial Design. In the post he had mentioned how he developed the whole idea and yes, Carberry did inspire him and so did the legendary Norcroft V twin Enfield and of course the Royal Enfield Interceptor, the last of the factory made Enfield Twins in England. He mentions how he wanted to 'keep it simple' to retain the vintage and traditonal 'Bullet' image and as such has kept the engine as it is, which means, kick start, 4 gears, stock tappets, no hydraulics, with some modifications like an in-house made oil filter.
What I particularly liked are the short exhausts, very different from what you would expect and it adds a lot of charecter to the exhaust note and also to the overall look. Also those those external copper oil pipes are looking very beautiful and really adds to the Bullet character. He mentions that the secong engine has really cut down the (legendary?) vibes of the Enfield. 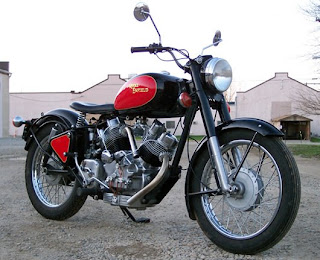 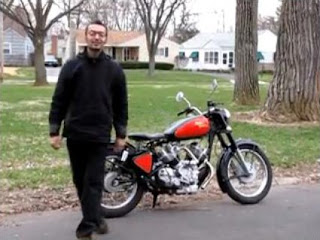 If you have rode an Enfield, you know how smooth it feels despite all those vibes, but Aniket mentions that his craetion is much more smoother, starts every time with a single kick and of course the torque has to be there. He wants to try out the new 5 speed gear box and i am sure it will definitely be much better. The veru unassuming young man really needs to be applauded and you can do that by emailing him at winsomniac@yahoo.com but of course you can also send him any queries you have. The name... MUSKET, well Royal Enfields are known as Bullet, right? so... it was only natural that he wanted to keep the lineage. Original source - THE KNEESLIDER