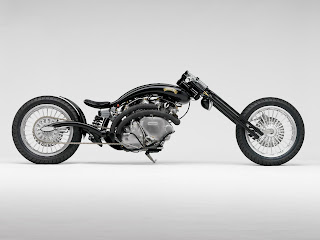 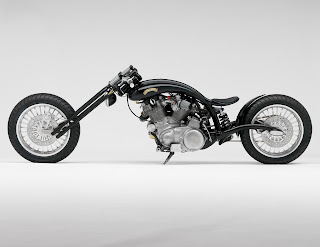 Sometimes, it’s really really hard to make an opinion on a passion that too of somebody else but you are also equally passionate about the same. For instance, this very VINCENT customized to a chopper. On one hand, you feel how anyone can customize this legendary piece of machinery into a chopper as Vincent meant racing something very alien to a chopper style and then again you know what better way to pay respect to a legend by recreating the passion in such a beauty that’s beyond what you can behold. And also like many others, I too was skeptical about the New Vincent coming into production using a Honda engine, but then if Vincent is all about the racing engine, it is also all about the stunning looks it had. 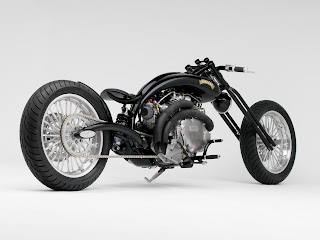 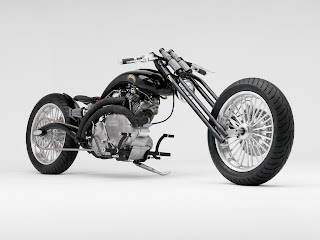 So, here we are, with Mike Marquart’s priced possession, a Vincent chopper designed by Redneck engineering. A Chopper with traditional Vincent looks with the magic engine. Mike Marquart saw the first Vincent Black Shadow in 1976 and his passion ignited then and is still burning brighter than ever. That visual gratification in 1976 lead him to posses one instantly but we know how difficult it is to spot a Vincent, leave alone buying one from a reluctant seller. Mike was part of Redneck engineering for 5 years and that helped him with his passion since Redneck’s motto is that they will and can design anything, you just need to have a vision for it! 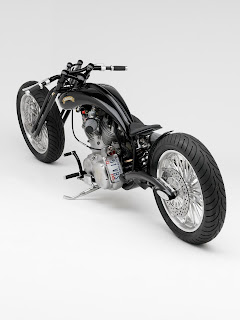 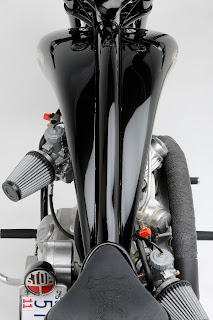 Mike chanced upon magazine by the name of VQ which artistic versions of custom motorcycles by the likes of David Mann. Mike, too got interested in customizing and since Vincent was his first love, so hunting season for that very Vincent opened. In the 40s, Philip Vincent himself had come to the US for an alliance with Indian Motorcycles to manufacture the VINDIAN which would be having the Vincent engine on an Indian chassis. But we know that never happened. Anyway 3 years passed and Mike was just not getting lady luck smile at him until finally through a friend, he came upon a lady who was selling off her husband’s Vincents after he passed away. He bought a ‘stash’ without even looking at it. 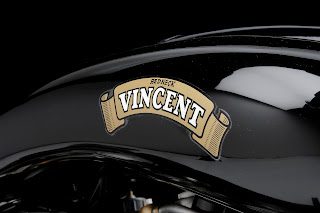 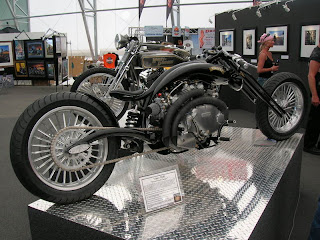 Not very sure if the entire stash had parts from a single motorcycle, he sought help from the world’s largest Vincent group (The Vincent dot com) and came to know that each Vincent had a serial VIN number and the group keep all the numerals for every known Vincent on file and the whereabouts. He discovered through their archives that his makeshift Vincent was actually very whole, except for the right timing case. This was a 1951 998 cc Vincent ‘Series C’ Black Shadow with 84mm x 90mm bore & stroke using twin 34 mm Mikuni carbs and K&N air filters. This particular series was produced from 1949 to 1954. Because of their extensive records he was able to contact the owner of the right case. He sent him the frame and the left case to rebuild the right case. 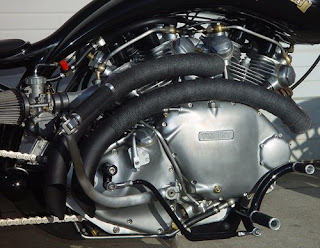 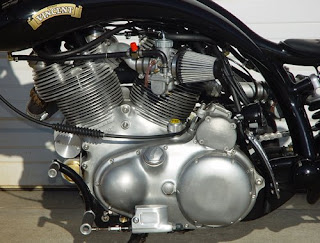 Now that the engine is there, so lets go about the body. The same magazine VQ was the inspiration for this particular design you see here and that same magazine had some wonderful David Mann paintings. And for all the handiworks, who better to approach then Vince Doll, biker extraordinaire and owner of Redneck Engineering? FYI, Redneck Engineering are custom bike builders in Liberty, South Carolina mainly into HDs and Buells. Mike wanted to showcase the tanks which were hand designed by Vince Doll. The frame contained the oil supply and the drivetrain was suspended from the frame itself. The frame tubing was elliptical and tapered for a sleeker design. Not letting to completely go off the Vincent’s legendary racing characteristics, he adapted a mono-shock, and raked the frame 50 degrees to match the 50-degree V-twin cylinders. 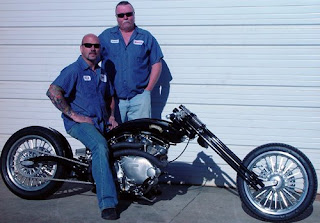 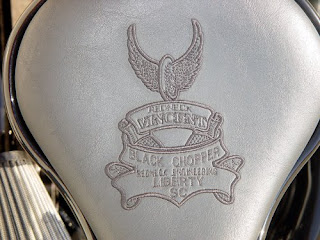 It was Steve Hamel (yes, the guy who built Matt Hotch’s engine for Discovery’s Biker Build Off against Roger Goldammer at the salts in 2006) who rebuilt this engine. Steve Hamel has also ported the heads. He was told to rebuilt it to Black Lightning Specs with 12 volt CD ignition and 6 volt Lucas charging system. The entire fabrication, welding, machining and parts manufacturing was done by Redneck Engineering. The frame along with the monoshock, the 50 degree rake and other modifications like using the engine as a stressed member, oval tubing, oil in backbone were thought processes of Vince and Mike. 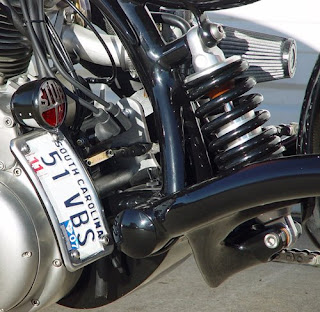 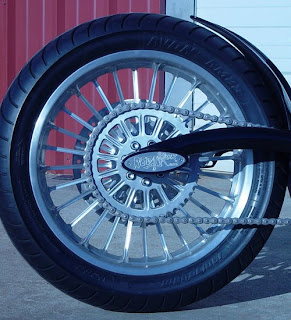 Among the originals retained for the chassis are the pushrods, lever style lifters and a few other parts. Both the front and rear Wheels have Weld Racing-Forge Wire of size 18 x 3.5 with Avon 110/80-18 & 150/70-18 tyres at the front and rear respectively. Brake calipers are from Performance Machine while the Brake rotors are from Weld. The seat is using Addis upholstery with Vincent Crest. The exhausts are of course hand built at Redneck with heat wrap. The Bonneville style handlebars are also creation of Redneck. For every detailed activity going into putting the bike together, visit this bikernet page.
What a finished product, this is! Most definitely for the engine (I am sure) but the bike does retain the Vincent look, I mean you cannot mistake the bike for anything else, can you? Mike Marquart has named his love simply Vincent Black Chopper.
Source of information: Bikernet, Source of Photos: Redneck Engineering. Detailing of the bike are also available here.